[Posted: 9:30 AM EDT] Good morning!  U.S. equity futures are recovering after a hard break yesterday.  PM May is on her way out.  There is hope of a break on the China/U.S. trade dispute.  Here is what we are watching:

Trade: There was mixed news on the trade front.  Late afternoon yesterday, President Trump suggested that the technology restrictions the U.S. was putting in place against China could be part of trade negotiations.  However, at the same time, the Commerce Department is changing regulations on tech exports to China, making such trade more difficult.  Meanwhile, China is considering measures to block American firms from buying Chinese technology.  Although the president suggested that U.S. policy toward the Chinese tech sector could be part of trade negotiations, increasingly, it appears that trade and technology are on two separate tracks and the latter may be far more important.  Today’s rally in risk assets has been attributed to the president’s comments yesterday about resolving both trade and tech together but those comments appear to be contradicting what we are seeing in practice.

In other Chinese trade news, pork imports jumped 24% in April, mostly due to the loss of supply in China caused by the African Swine Virus.  Even the U.S., which faced tariffs in China, has seen exports increase.

May leaving: For the past few weeks, it has been more a question of when, rather than if, PM May would step down.  She plans to leave office officially on June 6, although there is some speculation she could be around until the end of June if the Tories struggle to name a new PM.  The focus now shifts to her replacement.  The leading candidate is Boris Johnson, who has, in the past, advocated for a hard break.  Although there are concerns that Johnson will simply move to exit without a trade arrangement, it’s important to remember that it’s easy to be radical when you have no power.  At least in the short run, a hard break will have a detrimental impact on the U.K. economy and could lead to the loss of Northern Ireland.  In other words, if Johnson gets the reins of power, he will likely find himself in the same spot May was in; a painless Brexit is impossible to deliver.  We note that Johnson made comments today suggesting the U.K. should leave on Halloween, deal or no deal.  The GBP has weakened in the wake of his comments.

Dollar politics: The Treasury Department announced that it’s considering a new rule that will allow it to implement duties on nations that it deems have undervalued their currencies.  The U.S. already has a review process in place on exchange rates but, in practice, it has been mostly irrelevant.  The current regulations appear to give the U.S. the ability to prevent currency policies designed to lift exports to the U.S. but, in reality, the reserve currency nation will always encourage other nations to undervalue their currencies to acquire the reserve currency.  The Treasury has not indicated what the new regulations would entail but we do expect policy to change and the U.S. to use exchange rates as a reason for increasing tariffs.  On a related note, there is growing speculation that the PBOC is trying to dampen expectations that it will defend 7.0 CNY/USD.  The PBOC, a bit like the Bundesbank of old, seems to enjoy baiting traders into overweight positions only to hit them with intervention.  Thus, this seeming signal of weak defense could be a ploy to lure traders into being overly short the CNY, only to hit them with intervention.

Saturday in Japan: President Trump is heading to Japan for the weekend for talks with PM Abe.  Abe usually goes out of his way to personalize visits with Trump; he seems to have the idea that it helps to have a close personal relationship with the U.S. president.  Thus, expect lots of photo opportunities.  However, the U.S. is pressing Japan hard on trade and we doubt the personal relationship between Abe and Trump will give Japan much slack.  One potential market fallout—referencing the aforementioned Treasury policy change, we could see the U.S. press for a stronger JPY.  At the same time, the Abe government downgraded its assessment for economic growth but is still signaling it will continue to support the proposed consumption tax increase.

Weaker economy: Yesterday, we noted the Atlanta FRB GDPNow forecast is signaling GDP for Q2 at 1.2%, a significant slowdown from the Q1 3.2% growth.  Here is the forecast chart. 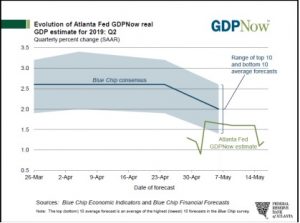 Although we tend to take a jaundiced eye toward using weather as an excuse, this time around there may be something to the claim.  Spring weather in the Midwest has delayed planting and caused severe flooding.  If weather has played a role, we could see a bounce later in the summer.

In another related issue, although the economy has bounced in recent years, the problem of inequality remains.  A map by the Economic Innovation Group shows the economic problems of rural America, especially in the South.  A Fed survey noted that 40% of Americans would struggle to cover an unexpected $400 expense.  The tensions caused by inequality are part of the political shift to populism.

Sunlight: Anyone who has dealt with the U.S. healthcare system is usually baffled by the inability to determine exactly what they are paying for drugs or services and why.  The administration is preparing an executive order to force healthcare providers to be transparent about their billing practices.  The industry, not surprisingly, is fighting the measure but the recent dive seen in the healthcare sector is partly due to such rules designed to force transparency.