[Posted: 9:30 AM EDT] The two big news items are the deterioration of conditions with North Korea and Trump’s call for a 25% tariff on autos.  Here is what we are watching:

What’s going on with North Korea?  For most of last year into early this year, it looked like war was increasingly likely.  Then, everything turned with President Trump agreeing to a summit.  Now, the summit is off.  North Korea has returned to the nuclear rhetoric.[1]  What happened here?  There were a couple of missteps by the Trump administration.  Suggesting that North Korea could use the “Libya model” was clearly a blunder (the South Africa model would have been a better example).  Selecting John Bolton for national security director sent a hostile signal.  But we don’t think these issues were key.

Instead, what we think is going on is that China is using North Korea to manage U.S./China trade relations.[2]  China was generally comfortable with the status quo in North Korea.  However, it was afraid that the U.S. and South Korea were trying to pull North Korea out of China’s orbit and thus has taken steps to reel Pyongyang back in.  There are reports that China has eased up on sanctions.[3]  Now, Beijing may be sensing an opening in which it may be able to pull both Koreas into its orbit and isolate the U.S.  After all, Trump renegotiated the Korean Free Trade Agreement to be less favorable to South Korea.  If Xi can get North and South Korea to become friendlier he might be able to reduce U.S. influence in the region.  A failed summit might move that goal along.  Of course, the risk is that a failed summit leads to an open conflict.  But, if South Korea won’t cooperate militarily, the U.S. probably won’t act.  Trump’s decision to hold a summit with Kim was a bold move but the inability to complete the deal may lead to a new arrangement that is less favorable to the U.S.

Auto tariff threats: President Trump, citing national security concerns, is threatening a 25% tariff[4] on automobile imports.  Although the national security angle seems to be a stretch, the Commerce Department has opened a study to determine the threat.  This study will likely take months, so this issue will hang over the market for some time.  Although the administration’s trade actions have tended to be less onerous than the rhetoric, trade impediments are inflationary and will tend to pressure financial markets.

Fed minutes: The minutes were taken as dovish, although our read leans more toward neutral.  There was some support for allowing inflation to exceed target for a while, but that expectation wasn’t a complete surprise.  Although current policy rates were described as “accommodative” (which we would agree with), there were “some” members who suggested this could be revised soon.  This indication may mean that some members are thinking we are approaching a neutral policy rate.  If true, a “stall” in tightening could occur, but we don’t think this is the base case.  Although two of the Mankiw Rule variations have the current rate essentially at neutral (wage growth and the employment/population ratio), the unemployment rate and the involuntary part-time employment rate shows many more hikes in the pipeline.  Thus far, the FOMC has not had to face a situation where some of the variations show tight while others show loose, but that day is approaching.  We would expect dissention to increase for a couple members over rate increases.

Iran responds: The supreme leader of Iran, the Ayatollah Khamenei, laid out conditions for the European powers to remain in the nuclear agreement.  Specifically, there will be no new negotiations on Iran’s missile program or its security policy in the Middle East.  The Europeans must continue to buy Iranian oil and safeguard trade with Iran.  Europe must condemn the U.S. for breaking the nuclear deal and “stand up” to U.S. sanctions.[5]  These are effectively non-starters for the U.S.  Iran is clearly trying to separate the U.S. and Europe in terms of Middle East policy.  We believe that Europe’s best interests lie with the U.S. but following the Trump administration will tend to raise oil costs for European consumers.

Turkish lira rebounds: The Turkish central bank raised rates 300 bps to 16.5% yesterday afternoon, triggering a sharp short-covering rally in the TRY.  However, this morning the exchange rate has started to weaken again, although it has not made new lows…yet.  Usually, markets will test the resolve of a central bank, forcing it to raise rates enough to convince traders that it will “do what it takes” to stabilize the exchange rate.

1997 redux?  The turmoil in both Argentina and Turkey has raised fears that we may be on the cusp of another emerging market crisis.  The high levels of debt in the emerging space, much of it in dollars, has also brought concerns.

This chart, courtesy of the St. Louis FRB,[6] shows a surge in emerging market debt, although most of the growth is emanating from China.  And, since the financial crisis, the dollar has become the borrowing currency of choice.  This borrowing has made emerging markets more sensitive to dollar strength. 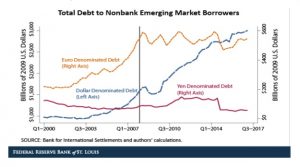 However, it should also be noted that there are significant differences between now and 1997.  First, many of the emerging economies pegged their exchange rates to the dollar.  When the pegs failed, debt service costs for dollar borrowers took a discrete jump and exacerbated the crisis.  Once one pegged currency failed, it led to a contagion that became impossible to control.  This time around, currencies are floating, meaning that they will not rise with discrete jumps, which should make debt management easier.  And, it should reduce the risk of contagion.  That being said, the emerging space needs dollar weakness to flourish and the debt data is a major reason why.

As the seasonal chart below shows, inventories are usually rising this time of year.  This week’s rise is inconsistent with the onset of seasonal patterns.  We expect steady stock withdrawals from now until mid-September.  If we follow the normal seasonal draw in stockpiles, crude oil inventories will decline to approximately 429 mb by September.

Based on inventories alone, oil prices are overvalued with the fair value price of $61.73.  Meanwhile, the EUR/WTI model generates a fair value of $64.76.  Together (which is a more sound methodology), fair value is $63.39, meaning that current prices are above fair value.  The combination of a stronger dollar and the unexpected rise in inventories means current oil prices are overvalued.  Using the oil inventory scatterplot, a 429 reading on oil inventories would generate oil prices in the high $70s.  The current high price is mostly a function of growing geopolitical risk which we don’t see abating anytime soon.  However, oil prices cannot continue to defy fundamentals; at some point, a correction may be in the offing.