[Posted: 9:30 AM EDT] Financial and commodity markets are very quiet this morning.  U.S. equity futures markets are mostly steady, the dollar is becalmed and there is a modest bid for Treasuries.  There was some important news overnight.  Here are the high points:

Moody’s downgrades China: The U.S. credit rating agency downgraded Chinese sovereign debt from Aa3 to A1.  In the previous rating, Chinese debt was considered “high quality and very low credit risk.”  The agency describes the new rating as “upper-medium grade and low credit risk.”  The reason for the downgrade is Moody’s estimation that debt levels are high and growth is slowing.  Initially, Chinese markets weakened on the news but recovered after the initial shock.  In China, there are essentially two groups fighting over this issue.  One group wants to address the debt issue by restructuring the economy away from investment and toward consumption.  This action will likely reduce growth but would, paradoxically, improve wellbeing as more funds end up with households.  The other group is wedded to growth at all costs and wants to keep investment high even if it requires more debt.  President Xi must balance these two groups; there is no clear favorite, although, like his predecessors, he tends to lean toward the latter.  The Moody’s decision will tend to strengthen the hand of the former group.  In reality, this is a warning.  In the near term, China will likely be able to maintain decent growth and social stability.  However, at some point, China will need to restructure its economy or face either a major social breakdown or years of Japanese-style stagnation.

Britain raises terror threat level to “critical”: In the British warning system, this level means that an attack is expected imminently.  Previously, the level was “severe,” meaning an attack is highly likely; most of the time, this is the government’s threat level.  Until yesterday’s increase, the level had been severe for 998 days.  So far, financial markets are taking the terrorist event in stride.

Fed minutes later today: Although most FOMC minutes are a bit of a yawn, the most recent ones have been closely monitored not only for clues on the path of future interest rates but also on balance sheet management.  We expect quiet markets going into the release of the minutes at 2:00 EDT.  We note that the current fed funds futures projection of a rate hike at the June 13-14 meeting is 100%, so any surprise would be a dovish one.

The Trump budget: We are not spending a lot of time on the recently released Trump budget because it has almost no chance of getting approved.  But, there are a couple of issues the budget does highlight that are worth examining.  First, when the decision is made to hold the two major middle-class entitlements, Social Security and Medicare, untouched, the budget is a battle over defense spending and everything else.  If the decision is made to raise defense spending, then everything else is going to be reduced unless revenue is raised through some form of revenue enhancement, either overt tax increases or less obvious reforms that reduce tax expenditures.  Until the major middle-class entitlements are addressed, this is the problem budget officers face.  Second, the growth problem is a real issue and if anyone has the answer to this one they can expect heroic treatment from future historians. 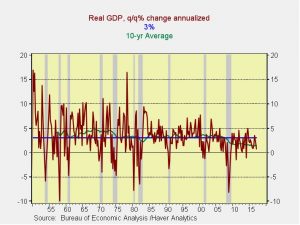 This chart shows the quarterly change in GDP, annualized, with the 10-year average of the data and the 3% growth line.  Since the early 1950s, economic growth has tended to hold around 3%.  It’s only been since the lackluster recovery from the Great Financial Crisis that growth has been persistently sluggish.  The current 10-year average is a mere 1.4%, although the average is affected by the deep drop in growth in 2008.  Getting growth back to 3% is key; it’s not clear how exactly to do that.  Our take is that the key to depressed growth is deleveraging.  If one wants to boost growth then reducing the debt load, mostly on households, is critical.  This isn’t the only issue but, in our opinion, it’s the most important factor.