[Posted: 9:30 AM EDT] It’s another quiet morning in front of Chair Yellen’s speech on Friday.  Yesterday, Dallas FRB President Harker added to voices calling for a rate hike this summer.  Fed funds futures are putting the odds of a June hike at about 32%, but the odds are over 50% for July.

One of the comments we hear frequently is, “how can a mere 25 bps rate hike matter all that much?”  By itself, the small rate hike really doesn’t matter.  The greater issue is the projection of future policy. 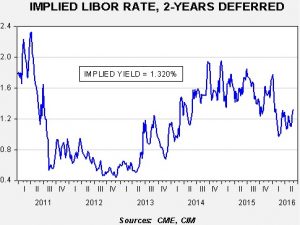 This chart shows the implied three-month LIBOR rate from the Eurodollar futures market.  It is a reasonably good gauge of market expectations toward future short-term interest rates.  Note how the implied rate was running around 40 bps when then-Fed Chair Bernanke began to talk about “tapering” the pace of the Fed’s balance sheet expansion in Q2 2013.  This decision marked, in our opinion, the beginning of the FOMC’s tightening cycle.  Implied rates rose nearly 160 bps.  A 200 bps reading on three-month LIBOR is consistent with a fed funds target of 175 bps.  As the FOMC raised the policy rate to a range of 25-50 bps last December, the implied LIBOR rate jumped about 50 bps.  It is interesting now that, even with rate hike expectations rising, the implied LIBOR rate has not increased by a lot.  The current reading discounts a fed funds target of roughly 100 bps two years from now.

If the implied LIBOR rate remains low, it would suggest that the market doesn’t expect the Fed to raise rates very much and thus, the financial market impact from a summer rate hike probably won’t be as bearish of an event as we saw in Q1.  Of course, the tenor of the Eurodollar market could change over time.  Nevertheless, based on what we know right now, the effect of a summer tightening probably won’t be all that extreme.  We will continue to closely monitor the deferred Eurodollar futures for clues about market expectations toward monetary policy.

The GBP is higher this morning after recent polls in the U.K. showed that the vote in favor of remaining in the EU holds a 13-point lead over those who support leaving.  We generally expect the U.K. to remain in the EU.  The economic benefits are high.  However, one issue we are watching closely has to do with the reliability of polling.  It is quite possible that voters polled may be lying about saying they will vote to remain.  Why?  Because establishment opinion clearly supports the campaign to stay and is painting those who want to leave as economically illiterate xenophobes.  Admitting to a pollster that one is such a person might be hard.  If the actual vote turns out to be much closer than these polls signal, it will offer us some insight into U.S. polling.  More specifically, it may be difficult for voters to admit they support Donald Trump and thus polls may be underestimating his popularity.  If the Brexit polling turns out to overestimate the support for remaining in the EU, then it may also be a harbinger of similar circumstances for Donald Trump.

The WSJ grabbed a major scoop yesterday when it ran a story suggesting that the Xi government is only giving lip service to the idea that financial markets are allowed to set exchange rates, and that stability is the primary goal of the regime, not clearing markets.  According to the report, in early January, the PBOC jettisoned the market-based mechanism; this change was unannounced.  Instead, the central bank now adjusts the CNY’s daily value based on directives from Beijing.  There is an old adage in economics that fixing one price forces other markets to experience higher volatility.  Fixing the exchange rate gives the illusion of stability that should ease the incentive for capital flight.  On the other hand, it makes China’s export sector more vulnerable to Fed tightening; if the dollar rallies, the CNY will appreciate as well.  It will also slow the drive to make the CNY a widely used reserve currency as history shows that fixed exchange rates eventually become unpegged, and the shifts tend to be violent when they lose their anchor.  The fact that the WSJ nabbed this report is, in itself, an interesting part of the story too.  It suggests the Xi government wants to signal to the world that it is re-pegging its currency and wants this information to be distributed by an unimpeachable source.