Good morning and happy Monday!  On Friday, the S&P 500 flirted with official bear market territory (a decline of 20% from the high), but using the words of a locally once famous market strategist, it made a “Hollywood finish” and closed nearly unchanged.  We are seeing follow through buying this morning with bond yields up a bit after stabilizing recently.  The dollar is sharply lower this morning, with the EUR rallying on reports the ECB is poised to end its negative policy rate soon.  The World Economic Forum is being held in Davos this week, and continuing the tradition of stating the obvious, the tone of the meeting is the end of globalization.

Our coverage this morning begins with China news, focusing on comments from President Biden on Taiwan.  From there, we take a look at the Australian elections, where a transfer of power has occurred.  An update on the Ukraine war follows.  We have a long read on the change in German thinking and the problems it presents for the Social Democrats.  A quick update on some economic and international news comes next and we finish with the latest on the pandemic.

China news:  While at a press conference in Tokyo, President Biden stated that the U.S. would militarily intervene if China were to invade Taiwan.  This is monumental.  America’s policy toward Taiwan has traditionally been strategic ambiguity.  We never committed to the defense of the island for a couple of reasons.  Knowing it was defended could change Taiwan’s behavior.  It could either (a) become reckless, threatening Chinese actions in the region (imagine shooting down Chinese warplanes that regularly penetrate its airspace), or (b) knowing the U.S. would act, no longer take steps to defend itself.  There have been voices calling for such a declaration. These were not universal.  The White House claimed this wasn’t a change in policy, but that is contradicted by similar comments made last year that set off a scramble by the State Department to walk back the president’s remarks.  Although the U.S. never said it wouldn’t defend Taiwan, the end of strategic ambiguity is a new complication for the region and U.S.-Chinese relations.  As one would expect, China isn’t happy with the comments.  In other news relating to China: 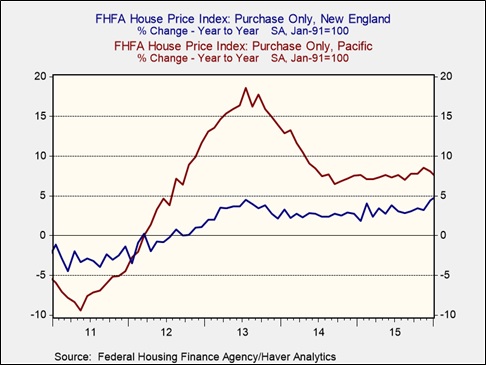 In 2013, the first year after Xi’s elevation to power, Pacific home prices rose nearly 19% compared to New England, where prices rose a modest 4.5% (for the U.S. as a whole, including the Pacific region, the rise was only 7.7%).  Fears of Xi’s crackdown on corruption likely led many wealthy Chinese to try to preserve their wealth from seizure by sending it abroad, with some of it finding its way to West Coast real estate.  Although outflows wax and wane over time, recently, there are reports of increased outflows. 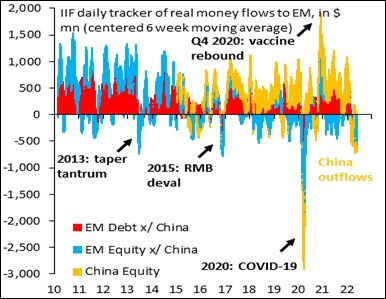 This chart from the Institute for International Finance shows a rise in outflows from China.  Fears of a larger crackdown in front of Xi’s third term are likely leading wealthy Chinese to move money out of the country.  The CPC is now saying party elites should divest from their foreign holdings, ostensibly to protect themselves from Western sanctions.  Even though experience of Russian oligarchs suggests this is a prudent policy, we suspect policy instability in China is a more pertinent concern.

A change down under:  In Saturday’s election in Australia, Labor has won the most seats and will form a government.  It is the first Labor government in almost a decade.  The latest data show that the Labor, led by Anthony Albanese, has won 73 seats, three short of a majority.  However, there are three races that are likely to go to Labor, meaning it should be able to form a government without a coalition.  The Liberal/National coalition, the conservatives led by Scott Morrison, took a drubbing, losing 21 seats to secure 54, although it might secure four more seats as the vote counting finishes.  Most notable, seven seats went to non-party affiliated independents, suggesting the Australian electorate is fracturing to some extent.  Calling themselves the “teal independents,” a play on the colors of the major parties, these independents support climate change legislation but are also centrists, meaning they reject the right-wing populism of the Liberal/National coalition.  How did Labor win?  It ran on a climate platform, promising to address carbon emissions.  Such promises are attractive until the costs of these policies emerge, and with inflation becoming a problem, it may be impossible to both reduce carbon emissions and control prices.  Increasing discomfort with the previous government also helped Albanese.  This election may have been more about not supporting the incumbent.  Unfortunately for Albanese, he is taking office as the Australian economy is hitting serious headwinds.  We note the OECD’s leading indicator is signaling a recession. 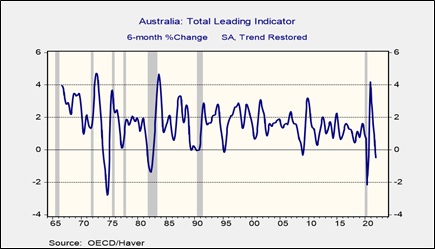 The Ukraine War:  The conflict appears to be evolving into a trench war, with both sides building fortifications to thwart offensive actions.  Here is the latest map: 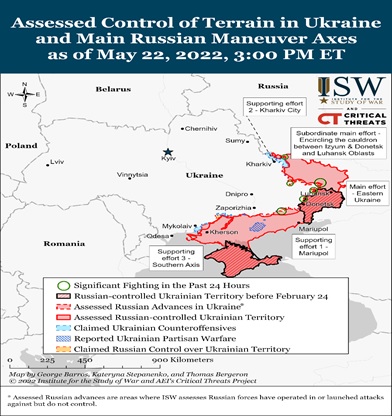 (Source:  Institute for the Study of War)

Most of the fighting is shown by the green circles on the map.  The circle highlighted with an arrow shows the fighting around Sievierodonetsk, where Russian forces are trying to push Ukrainian forces out of the area.  There are reports the Russian military has relieved some commanders of their posts, is splitting units into smaller groups, and is using more artillery and less infantry in its fighting.

A German scandal:  Narratives are important to human thinking.  We tend to tell stories as a way to make sense of the world.  We don’t consider them “stories” or “myths,” instead, we call them “narratives” to frame our views of the world.  Robert Schiller wrote a book about economic narratives that is a worthy read.

One narrative that has emerged in various forms over the past couple of centuries is the idea that trade makes the world less risky.  In other words, if we trade with each other, we are less likely to go to war.  Norman Angell wrote a book called “The Great Illusion” where he suggested that a major war in Europe wasn’t likely because of how deeply intertwined the economies of the continent were… in 1910.  Despite how disastrously wrong this idea was with reference to WWI, the notion has persisted.  Tom Friedman made famous a common saying that two nations with McDonald’s (MCD, USD, 230.51) have never gone to war.  Well, they have now; both Ukraine and Russia had the restaurant chain.

A variation of this idea became popular in Germany among the Social Democrats (SDP), which was that trade with the Soviets would improve relations and tame the worst instincts of Moscow.  The concept, called Osthandel, argued that this trade helped end the Cold War.  Needless to say, the U.S. narrative on the end of the Cold War didn’t acknowledge this German narrative. The American version would argue the U.S. prevailed despite German actions.  But, stories stick, and the Germans held on to it after the Soviet Union dissolved.  Thus, Germany saw the growing dependence on Russian energy not as a bug but as a feature, a formula for peace and prosperity.  The Germans went so far as to build direct pipelines to Germany through the Baltic Sea, the Nord Stream I and Nord Stream II pipelines, bypassing those pesky Poles and Ukrainians.

The Russian invasion of Ukraine has shredded Osthandel, and the political ramifications are just starting.  Former German Chancellor Schroder has finally resigned from the board of Rosneft (NK Rosneft’ PAO, RUB, 384.25).  But, he is the Chairman of Nord Stream 2 and was recently nominated to the board of Gazprom (Gazprom PAO, RUB, 263.00).  In a recent profile in the New York Times, Schroder was unapologetic for his ties to Russian energy and his personal friendship with Vladimir Putin.  In fact, Putin offered him a board seat on Nord Stream 2 a mere 17 days after Schroder left the office of the Chancellor of Germany, the project was approved on his watch.  This week, the SDP and its coalition partners stripped Schroder of his parliamentary privileges.  He loses his office and staff, although he will keep his pension and security detail.  The CSU leader, Markus Soder, described Schroder as a “willful, bizarre, old man who cares more about his own bank account than Germany’s reputation in the world.” “That’s embarrassing, a disgrace for our country.”

Adding to the scandal is that Matthias Warnig, a former Stasi agent, was also a colleague of Schroder on the board of Rosneft.  Warnig worked with Putin during the latter’s time in East Germany when he was a KGB agent.  After the fall of the GDR, Warnig, who used the cover of a trade official for East Germany when he was with the East German spy agency, was hired by Dresdner Bank (now a unit of Commerzbank, (XETRA, EUR, 7.24)) shortly after German reunification.  He was instrumental in founding the Dresdner Bank Moscow branch; this branch was in St. Petersburg and was negotiated with none other than Vladimir Putin.

So why is this important?  The German ruling coalition is perhaps the most complicated in postwar German history.  The three parties that form it have divergent interests, and thus, unlike former governments, this coalition might not hold together.  Or, the leadership might change; if the Chancellor came from the Greens, the policy toward Russia would likely harden.  The same is true for the Free Democrats, the other member of the coalition.  Schroder has damaged the SDP in a manner that may force Chancellor Scholz out of office.  The comments above by Soder of the opposition CSU suggest the political atmosphere for Scholz is deteriorating.  There is a growing likelihood that Green Party leader and current foreign minister Annalena Baerbock could take that role.  In any case, the only way for Scholz to survive will likely require him to take a much more hardline position against Russia.  Burying Osthandel would harden relations with Russia, regardless of who is in power in Russia.  And, of course, this hardening of relations has led to Germany planning to boost its defense spending.

International roundup:  More from the president’s trip and an update on Israel

COVID-19:  The number of reported cases is 525,686,037 with 6,277,389 fatalities.  In the U.S., there are 83,281,403 confirmed cases with 1,002,173 deaths.  For illustration purposes, the FT has created an interactive chart that allows one to compare cases across nations using similar scaling metrics.  The FT has also issued an economic tracker that looks across countries with high-frequency data on various factors.  The CDC reports that 741,676,155 doses of the vaccine have been distributed, with 584,279,990 doses injected.  The number receiving at least one dose is 258,149,591, while the number fully vaccinated, which would grant the highest level of immunity, is 220,914,142.  For the population older than 18, 76.5% of the population has been fully vaccinated, with 61.1% of the entire population fully vaccinated.  For those over 65, 90.5% have been fully vaccinated.  The FT has a page on global vaccine distribution.