[Posted: 9:30 AM EDT] Good morning!  U.S. equity futures are modestly lower this morning.  There is a lot of news to digest this morning.  Here is what we are watching:

Trade wars: There is little evidence that the trade situation in China is improving.  If anything, conditions are worsening.  Here is what we are seeing:

The bottom line is that the likelihood is falling for a trade deal at next month’s G-20 meeting.  Although President Trump’s mercurial nature could lead to a surprise agreement, in reality, China and the U.S. are now strategic competitors.  While it’s possible the two nations could eventually accommodate each other, that sentiment suggests a level of optimism we struggle to share.  In the immediate situation, financial markets continue to cling to hope that this will all pass.  That hope is becoming increasingly difficult to maintain.

Gaming trade: Trade restrictions have been around for centuries and producers and consumers have worked on ways to evade them.  A prominent American protein producer has apparently figured out a way to evade Chinese trade sanctions.

Gaming tech: Drivers for the various ride-sharing companies have developed a new tactic to force up their pay.  At large airports, all the contractors coordinate to shut off their apps, leading the algorithms to assume there is a shortage of drivers.  This leads to surge pricing, allowing the drivers to increase their pay.

Fed minutes: Overall, the minutes were a bit hawkish, more reflecting Chair Powell’s press conference comments about transitory inflation than leaning toward a rate cut.  There were comments expressing concern that continued low inflation might lead to lower inflation expectations, with the term “several” being used.  But, the general tenor is that current low inflation is an aberration and won’t be maintained.  One reason for this position is based on the Dallas FRB Trimmed Mean PCE.  The “trimmed mean” process essentially throws out the most extreme component readings of the PCE that could be skewing the data.  Their yearly reading does show stable prices. 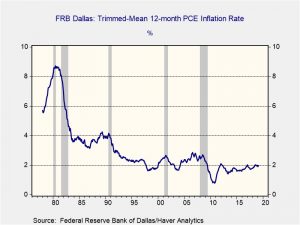 At the same time, it does not suggest a decline in inflation that would strengthen the need to cut rates.  In looking at the extreme distributions, 26.7% of the PCE components indicated monthly price changes in excess of 26.7% annualized.  Price changes from zero to 2% were around 14%.  Overall, this distribution would suggest caution on being overly worried about disinflation.  The minutes suggest a Fed on hold, with a “few” members pressing for tightening, but the financial markets are leaning even more heavily toward a rate cut. 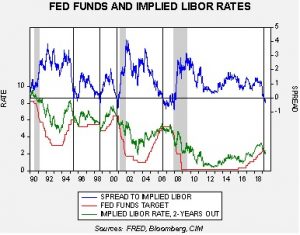 This chart shows the two-year deferred implied LIBOR rate from the Eurodollar futures market and fed funds.  The upper line shows the spread.  The relationship has been remarkably accurate in signaling when policymakers should end tightening cycles.  We inverted these rates in late March; the implied LIBOR rate is now down to 2.01% (see chart below), suggesting monetary policy is too tight.  That is not the message the FOMC is sending, which is increasing the risk of a policy error. 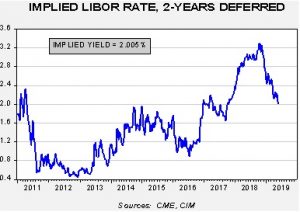 The end of May: It finally looks like the end for PM May is coming.  Andrea Leadsom resigned from her cabinet position yesterday, indicating she could no longer support the PM’s Brexit plan.  Tory MPs are furious with May’s flirtations with Labour by offering a customs union and hinting at supporting a second referendum.  At the same time, the Brexit Party looks like it will win the majority of EU Parliament seats, a further blow to May.  Internal Tory party leadership is expected to meet with May in the coming days and will likely press her to step down.  All this political turmoil has been bearish for the GBP.

Weaker economy: The Atlanta FRB GDPNow forecast is signaling GDP for Q2 at 1.2%, a significant slowdown from Q1 3.2% growth.  Here is the forecast chart. 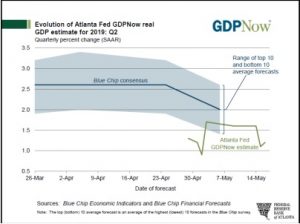 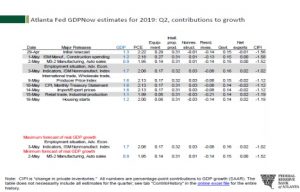 The largest drag on growth is inventory liquidation, which accounted for 65 bps of growth in Q1.

Those pesky Russians: Russian warplanes were buzzing the coast of Alaska earlier this week; two incidents were reported that led the U.S. to intercept in both cases.  The Russians sent two Tu-95 bombers and two Su-35 fighter escorts.  The Tu-95 is a Cold War-era large turboprop bomber; it is essentially Russia’s answer to the B-52.  The bomber is a lumbering aircraft; although it can act as a platform for cruise missiles, its ability as a bomber is minor due to its large size and low speed.  But, it is a perfect aircraft to send a message as one can’t miss it in the air.  However, it isn’t obvious what that message is except to signal that Russia isn’t afraid to make provocative acts.

Foreign political news: EU parliamentary elections begin today.  We covered them in detail in yesterday’s report.  Election disputes in Indonesia led to riots yesterday.  It is hard to see how Joko Widodo could have won by fraud given the size of his win, but the loser, Prabowo Subianto, protested the outcome and apparently triggered the response.  We continue to wait to see how the incumbent responds.  In India, as expected, Narendra Modi has returned to power in a landslide.

Energy update: Crude oil inventories rose 4.7 mb last week compared to the forecast drop of 1.9 mb.  There was a 1.1 mb draw of the SPR, meaning the actual build was closer to 3.6 mb.

This is the seasonal pattern chart for commercial crude oil inventories.  We are now well within the spring/summer withdrawal season so the continued build is bearish for prices.  The seasonal pattern remains below normal but the gap is closing rapidly. 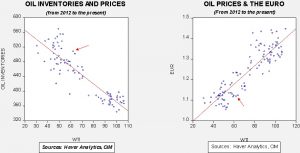 Based on oil inventories alone, fair value for crude oil is $49.10.  Based on the EUR, fair value is $51.24.  Using both independent variables, a more complete way of looking at the data, fair value is $49.45.  Geopolitical risks are adding nearly $13 per barrel to crude oil prices.  Although the geopolitical risks are formidable, this spread is unusually wide and raises the odds of a deeper price correction in the coming weeks, assuming that inventories remain elevated and the dollar remains strong.  Of course, this rich price is due to geopolitical risks; Iran has been using covert actions in response to U.S. sanctions, and the U.S. is considering boosting its troop presence in the Persian Gulf.