(N.B.  We are making a modest change today in this report.  Instead of footnoting links to news items, we are moving to using hyperlinks.  To see the linked story, simply click the underlined and highlighted item in the report.  This is a more “modern” way of linking and will make our reports less cluttered.)

Good morning!  U.S. equity futures are modestly lower this morning.  The Fed minutes are out later today and trade tensions remain elevated.  Brexit looks a mess and EU Parliamentary elections are coming.  Here are the details:

BREAKING: Russian aircraft, for the second day, have threatened U.S. airspace, leading American warplanes to intercept.  We will have more on this tomorrow.

Fed minutes: We will be watching for any insight into the committee’s thinking on the nature of inflation.  Members have indicated at least some degree of dissention as to whether the current low inflation is due to structural issues or if, as Chair Powell stressed in his post-meeting press conference, current low inflation is due to “transitory factors.”  Our take is that it’s probably more permanent, but we don’t vote on the committee!  Although the minutes are heavily edited, look for words that suggest any sort of numbers, such as “some” or “a few” or “most.”  If the minutes suggest the permanent inflation group appears to be larger, it might mean a dovish tilt.

Tech trade war: Positions on both sides are hardening.  The Trump administration is considering blacklisting Chinese surveillance technology firms, which would prevent them from purchasing U.S. technology.  This action would further escalate tensions.  The Chinese appear to be “digging in” as well; Chairman Xi told his people to prepare for difficult times, relating the current situation to Mao’s “Long March.”  American firms operating in China report increasing difficulties, including rising costs and increased regulatory scrutiny.  A rising number are looking to relocate, with Southeast Asia and Mexico as the most favored destinations.  The growing trade conflict increases the risk of global recession.

EU parliamentary elections: We analyze and comment on domestic and foreign politics on a regular basis.  That being said, we haven’t been overly enthusiastic about delving into the upcoming parliamentary elections.  The rules are devilishly complicated and it has never been clear to us how powerful the body actually is.  Often, the EU Parliament vote is a protest action against the established domestic governments.  However, with all that being said, the elections are looming and this is what you need to know:

Overall, we don’t expect an immediate market impact, regardless of the outcome (which is why we haven’t had much to say before now).  The EU moves slowly by design.  But, over time, it could change economic and regulatory policy and increase dissention in Europe.  The more power the populists receive, the greater the odds of an eventual EU/Eurozone breakup.  Again, this isn’t anything we expect in the next few years, but by 2025 we could be seeing clear signs of trouble.

Brexit: PM May is offering a fourth vote for her plan and has suggested she will allow a second referendum vote by Parliament.  The response has been overwhelmingly negative.  It appears that PM May tried to lean toward supporting Labour’s ideas for a Brexit deal, which has infuriated the hardline Tory members but failed to woo the opposition.  The GBP has held up rather well, edging lower but not breaking down.  The real risk to the currency is probably a Corbyn government, not Brexit.  May probably won’t survive another month and the polling suggests Boris Johnson will be the next Tory PM.  Johnson is a bit of a rogue but has tended to lean toward a hard Brexit.  If Johnson pushes the country toward a hard Brexit, we would not be shocked to see new general elections.  Overall, the political trends are not favoring the GBP, but nothing looks catastrophic…yet.

Debt limits: It looks like we are actually close to getting a budget deal.  If so, the potential for autumn drama will be reduced. 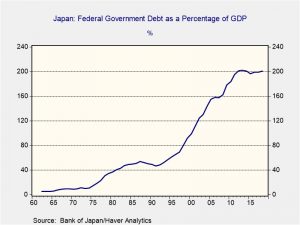 Its government debt/GDP is over 200%; for years, bond vigilantes have been shorting JGBs because “someday, this has to lead to inflation and falling bond prices.”  The trade has been so spectacularly bad it has become known as the “widow maker.”  Japan, like most nations that developed after WWII, used export promotion to constrain consumption, boost saving and use the saving for investment.  That works very well until a certain level of development is achieved.  Then, the economy needs to (a) shift to consumption instead of exports to drive growth, and (b) use various methods to deal with the inevitable malinvestment that develops from subsidizing investment.  Japan has essentially done neither and has suffered through 30 years of stagnation.  A holdover from this policy is the reliance on consumption taxes to raise fiscal revenue.  This is harebrained—the last thing the overburdened household sector needs is more taxes.  But, because policy inertia is so strong, the country continues to look at raising consumption taxes to address the aforementioned deficit.  Under Abe, the government has tended to back away from planned hikes and we expect them to continue that policy.  But, the recent surge in GDP may undermine the short-term political argument for postponing the hike and thus the odds may have increased for it to go through.  If it does, we would look for a cyclical downturn in the economy.  The BOJ is warning it will consider further easing measures if the tax boost is enacted.