Good morning.  U.S. equity futures are lower, although off the worst levels of the session.  Other assets, like commodities and crypto, have also come under pressure.  Our coverage kicks off with the Fed minutes, which roiled financial markets.  We follow with a discussion of the cryptocurrency market.  An update on Israel/Hamas is up next.  Economics and policy follow.  China news is up next, with the international news roundup on its heels.  We close our notes with a pandemic update.

Fed minutes:  A reading of the minutes of late April’s meeting of the FOMC reveals a central bank remaining committed to accommodative monetary policy.  The market’s reaction to the release of the report shows how sensitive investors are to any of the withdrawal of support.

A number of participants suggested that if the economy continued to make rapid progress toward the Committee’s goals, it might be appropriate at some point in upcoming meetings to begin discussing a plan for adjusting the pace of asset purchases.

The bulk of the report showed that most members did not think the economy had recovered enough to remove accommodation.  Although some members did express worries that inflation might become a bit more troublesome than public statements from FOMC members would suggest, there wasn’t a lot in the report to suggest that a reversal is imminent.  We view the above comment as a “thinking about thinking about” removing accommodation.

However, reading between the lines does suggest that some members are getting a bit worried about staying easy for too long.  We have been rather surprised by how unified the FOMC has been on policy.  We think we are seeing is a return to normal, which is some degree of dissension.  Hawks are starting to emerge, and the financial sensitives, who are worried about financial market dislocation, may also be raising concerns.  If Powell intends to keep policy steady into 2023, he is going to have to manage the pressure to raise rates.

It is natural for financial markets to anticipate, so the focus on what may have been a minor phrase is not a surprise.  We are taking Powell at his word, which is that we are seeing an end to the Volcker doctrine of stressing inflation control to one that focuses on maximum employment.  It should be noted that Volcker also faced strong opposition to his policies within the FOMC.  It would not be a surprise that the reversal of Volcker’s doctrine would face opposition.  The key point is how he manages the dissent.

Finally, market action yesterday (and into this morning to some extent) highlights just how important monetary policy has been to asset prices for the past 14 months.  Historical metrics of asset prices in various markets all look extended.  They are mostly justified by the low level of interest rates and high levels of liquidity generally centered in affluent households.  For most of the past 13 years, the Fed has undermined cash as an asset class; if cash becomes a desired asset again, it will undoubtedly be bearish for overall financial asset prices.  What remains to be seen is how tolerant the Fed will be to falling asset values.  To some extent, ignoring financial markets would be an end to Greenspan’s mark on the Fed.  Greenspan, from 1987 on, made it clear the Fed would come to the rescue when, during periods of financial turmoil, creating the “Greenspan put.”  Ending that policy (if it does end) would be perhaps a bigger deal than focusing on the labor markets over inflation.

Bitcoin:  Although the Fed minutes did raise concerns yesterday afternoon, the morning was dominated by bitcoin volatility.  A number of factors affected the price of bitcoin.  First, the chart has been deteriorating for several weeks. 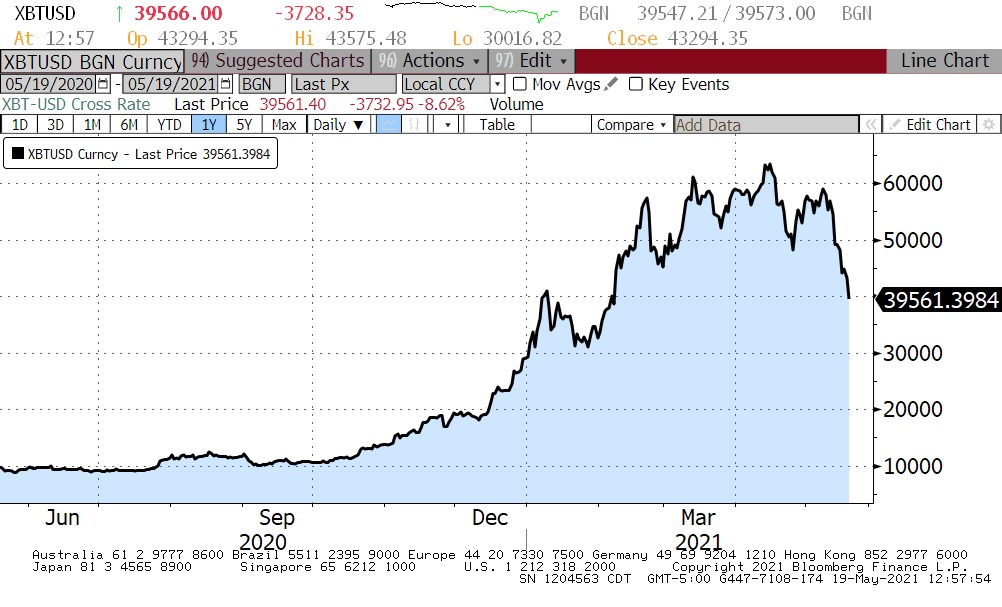 Although the price rose sharply into March, momentum has clearly been slowing.  Falling momentum will tend to encourage some participants to exit.  Second, China is cracking down on bitcoin use, essentially making it illegal for firms to price their goods in cryptocurrency.  Third, the Colonial Pipeline hack has made it clear that cryptocurrencies have become the payment of choice for criminals; a crackdown on its use seems unavoidable.  It may be too late to eliminate them, but forcing exchanges to identify participants may be coming, which would, of course, reduce the attractiveness of the currency to organized crime.  Regulation may be the most bearish factor regarding cryptocurrencies.  Interestingly enough, it’s not just China that is increasing regulatory scrutiny.  The Office of the Comptroller of the Currency is also reviewing its crypto guidance.  And fourth, although crypto is marketed as a way to avoid the “middlemen” in the financial system, most institutional buyers use coin exchanges, and, lo and behold, yesterday some of these exchanges didn’t allow holders to liquidate positions, which may have exacerbated the selling.

Until recently, we haven’t been overly concerned about what is happening in crypto assets.  Recent reports suggest the Fed isn’t either.  After all, price volatility in baseball cards or Beanie Babies didn’t trigger systemic risk.  This may be a serious mistake. A recent Odd Lots podcast with Viktor Shvets as guest detailed the systemic risk bitcoin could be creating.  He made the point that traders are buying bitcoin with leverage, meaning that as prices fall, margin calls are occurring as well.  So far, we haven’t seen any strong evidence of systemic risk.  However, as numerous events over the past 25 years have shown, leverage coupled with price volatility can lead to unwelcome outcomes.  Yesterday’s price action in bitcoin closely mirrored equities, perhaps signaling that cryptocurrencies are becoming a systemic risk. 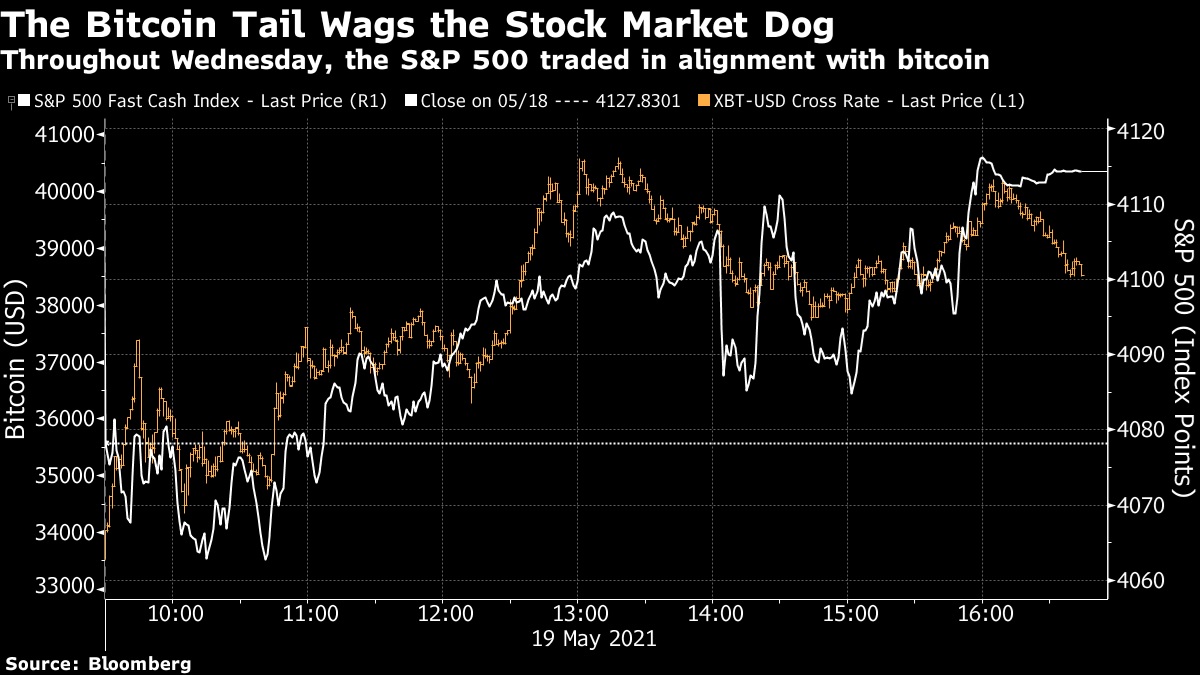 Israel and Hamas:  President Biden is pressuring PM Netanyahu to end the current campaign against Hamas.  So far, the Israeli leader is ignoring the U.S., but we don’t think this defiance will last much longer, simply because it looks like this current situation has about run its course.  What we have learned from this event is that the Arab world has mostly abandoned the Palestinian cause.  As the U.S. moves out of the region, the Arab states are banding with Israel to oppose Iran.  This development was part of the Abraham Accords.  It appears that with each flareup of hostilities, Palestinians in Gaza are put in a worse position.  We would expect hostilities to wane by the weekend.

Economics and policy:  Tariffs are being eased, and rents are rising.

China:  U.S. tech in China is in an uncomfortable position, and cross-border investment is down.

International roundup:  A rebel leader in Colombia has been killed, and PM Johnson is facing farmer pressure.

COVID-19:  The number of reported cases is 164,966,830 with 3,419,446 fatalities.  In the U.S., there are 33,027,220 confirmed cases with 587,875 deaths.  For illustration purposes, the FT has created an interactive chart that allows one to compare cases across nations using similar scaling metrics.  The FT has also issued an economic tracker that looks across countries with high-frequency data on various factors.  The CDC reports that 349,210,095 doses of the vaccine have been distributed with 277,209,173 doses injected.  The number receiving at least one dose is 159,174,963, while the number of second doses, which would grant the highest level of immunity, is 125,453,423.  The FT has a page on global vaccine distribution.  The Axios map shows unmistakable good news.  Forty-nine states are showing steady to declining infection rates.