[Posted: 9:30 AM EDT] Some markets, notably China and Japan, remain closed for May Day.  Here is what we are watching:

The Fed: As expected, the FOMC left rates unchanged.  The statement acknowledged the pickup in economic growth but tempered that positive comment by indicating that household spending and business investment had weakened.  It also noted low inflation.  The Fed did act to lower the IOER rate from 2.40% to 2.35%, as expected, leaving the policy range unchanged at 2.25% to 2.50%.[1]  The fed funds rate had moved above 2.45% so the IOER rate was lowered.  Initially, the lowering of the IOER rate was taken as dovish.  However, Chair Powell specified that this action wasn’t a policy move and described it as “technical,” and financial markets reversed the dovish take.  Essentially, not much happened but the financial markets misread the IOER cut as a precursor for easing; Chair Powell put that idea to rest and the dovish position reversed.  A second factor weighed on sentiment when the chair characterized recent low inflation as “transitory.”  Low inflation was mentioned and has been discussed among some members of the FOMC as a potential problem that may require easing.  Powell’s characterization of low inflation as transitory seemed to contradict those concerns.

Powell indicated that the Fed is on hold.  He said the Fed could just as easily ease as tighten, which is a very good definition of neutral policy.  Financial markets continue to signal that the next move should be a rate cut.

The chart on the left shows the implied three-month LIBOR rate from the Eurodollar futures for the contract two years in the future.  Note that the rate has declined from over 3.30% last October to 2.16% now, a significant decline.  The chart on the right compares this implied rate to the fed funds target.  We have placed vertical lines when the two rates invert.  When these two rates invert, it signals that the Fed needs to start easing to avoid a recession.  With the rate inversion in February, which has persisted, these charts would argue for an “insurance” rate cut as recently discussed by Vice Chair Clarida.  Thus, Powell’s description that policy is at neutral, meaning the FOMC could move rates in either direction, doesn’t fit the financial market’s position.  Without a rate rise in the short end of the yield curve, the most likely next move is for lower rates, unless the Fed is determined to trigger a recession.

By the way, for those of you keeping score at home, here is the S&P on the dates of Chair Powell’s press conferences. 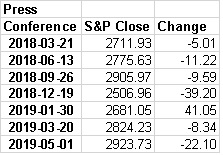 In seven meetings with press conferences, six had negative closes.  We think the Fed’s policy transparency is a terrible mistake; policy functioned much better when little was said. 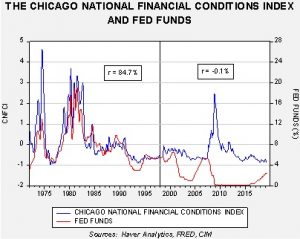 This chart shows the Chicago FRB National Financial Conditions Index, which is a reading of financial stress, and fed funds.  From 1973 to mid-1998, the two series were highly correlated.  Since then, they are virtually uncorrelated.  The Fed began to slowly increase the level of transparency beginning in the mid-1990s.  By mid-1998, we were getting statements and regular comments from FOMC members.  During the period of relative opaqueness, financial stress was a force multiplier for the Fed, so raising or lowering rates had a dramatic impact on financial market behavior.  Thus, tightening tended to reduce borrowing and raise the cost of risk, and lowering rates had the opposite effect.  By increasing transparency, allowing market participants to accurately assess the direction of policy, the Fed’s ability to affect financial conditions has essentially been lost.  So, when the Fed tightens it does little to inhibit risk activity, and easing does little to encourage risk-taking.

Powell’s decision to increase the number of press conferences is a good example of this problem.  As the above table shows, the chair seems to have a remarkable ability to bring lower equity values.  Now, if this is his goal, he should be commended.  But, we doubt that is the case; instead, we suspect he is trying to sound “reasonable,” which gives a muddled picture and leads to selloffs.  If the FOMC position on low inflation is transitory, then why have a meeting in June to discuss changing inflation targeting?  On Friday, NY FRB President Williams and Vice Chair Clarida will give speeches.  We will be watching to see if these two essentially walk back Powell’s comments.  If they do, it would suggest the chair misspoke.

U.K. elections and other things: The U.K. is holding local elections today.  The Tories are expected to take a drubbing, although the U.K. Independence Party isn’t competing which may limit the damage.[2]  Turmoil continues within May’s government; she sacked her defense minister overnight, blaming him for the leak around Huawei (CNY 4.02, +0.17).[3]  It appears PM May is leaning toward a customs union with the EU, the position supported by Labour, as a way of avoiding a hard Brexit.  If she can gather enough supporters in the opposition, she might be able to close a deal soon.[4]  However, there is a wild card in this idea.  There is a sizeable number of hard Brexit supporters within Labour that may put Corbyn’s leadership at risk if he supports such an arrangement.  The downside of a customs union is that it would prevent the U.K. from making its own free trade agreements, at least on goods trade, with other nations.  The Bank of England (BoE), as expected, left policy unchanged.  However, its comments struck a decidedly hawkish position, indicating that rate hikes will be needed in the future to offset stronger economic growth.  Although the tone was hawkish, it is clear the BoE is in no hurry to tighten policy.[5]

Venezuela: It still isn’t exactly clear what happened this week.  It does appear that Guaido thought he had splintered the security forces enough to unseat Maduro.  It also seems that administration officials thought so, too.[6]  Clearly, that plan didn’t work out.  But, if the action failed (we would not call it a coup because there is a case to be made that Guaido is the legitimate leader of Venezuela), then why didn’t Maduro arrest Guaido?  It is possible Maduro has concluded that he doesn’t have the power or the skill to return Venezuela to prior prosperity.  Therefore, he wants to leave but the Russians[7] and Cubans have “convinced” him to stay.[8]  There are reports of negotiations between the opposition and the regime.[9]  Meanwhile, Guaido is trying to maintain momentum after what appears to be a significant disappointment.[10]  Protests continue with no end in sight.[11]  If Maduro were to exit, we would likely see a correction in oil prices.  For now, Maduro is hanging on but we wonder whether he actually wants to stay.  One possible outcome—Russia, Cuba and China could remove Maduro and replace him with another member of the regime, perhaps a military figure, that would protect their position in the country and defuse the protests and the opposition.  Such an outcome would put the U.S. in a difficult position—would the administration support the new government or take steps to oust it?  Although there are elements in the administration and GOP who would support a military intervention, we think President Trump would be very reluctant to commit troops to Venezuela.

Chinese pork imports and ASF: As African Swine Fever (ASF) decimates the Chinese pork industry, Beijing has taken two actions that perhaps offset each other.  Due to continued tensions between Ottawa and Beijing over the arrest of Meng Wanzhou of Huawei, China has been taking steps to punish Canada, including arresting Canadian nationals in China.  Today, China announced it was suspending pork imports from two Canadian pork producers,[12] likely another step in its attempts to pressure Canada to release Meng.  However, this action by China risks driving up pork prices further, so why target this industry?  Perhaps because China has found alternative sources for pork in Argentina.[13]

Capital flight: One position we have held for some time is that if the U.S. does back away from its hegemonic role, world stability would suffer and the wealthy worldwide would be looking for an “escape portal” to protect their wealth and person.  We have contended that the U.S. would be a prime destination for this capital flight.  The U.S. has deep financial markets and a stable legal system, making it a good place to land if one’s homeland turns hostile.  Recent data suggest an increase in “wealth migration” last year, with the U.S. seeing some of that flow.[14]

Europe and LNG: U.S. LNG exports to Europe are surging, up 272% over the past year.[15]  The exports began to rise in the wake of meetings between President Trump and President Juncker last summer.  The chart below shows how shipments have jumped after the meeting.  It appears the EU may be using LNG as a potential bargaining chip in upcoming trade talks.[16] 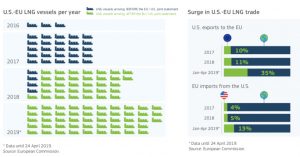 U.S. natural gas prices have been depressed due to the high associated gas production tied to surging U.S. oil output.  But, expanding LNG exports could reduce this supply overhang and eventually lift prices.

This is the seasonal pattern chart for commercial crude oil inventories.  We are entering the spring/summer withdrawal season next week, so if inventories continue their rise it will become a significant bearish factor for prices.  The recent upswing in inventories is remarkable; stockpiles have increased 30 mb over the past six weeks.  Although we did not achieve seasonal parity with regard to inventories, the gap clearly narrowed. 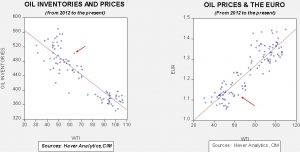 Based on oil inventories alone, fair value for crude oil is $50.83.  Based on the EUR, fair value is $51.96.  Using both independent variables, a more complete way of looking at the data, fair value is $50.55.  This is one of those circumstances when the combined model fair value does not lie between the two single-variable models.  Current prices are running well above fair value.  Geopolitical risks, including the turmoil in Libya, continued problems in Iraq, unrest in Venezuela and the end of Iranian oil export waivers, are all lifting prices.  However, our data does suggest that the markets are getting a bit rich so any evidence that these situations are improving will likely lead to at least a period of consolidation, if not a pullback, in prices.