[Posted: 9:30 AM EDT] The FOMC minutes were more hawkish than the market expected.  In fact, in the minutes, the members expressed concern that the financial markets are underestimating the likelihood of a rate move.  The committee felt that foreign risks have lessened and several suggested that the balance of risks between inflation and recession are “balanced,” although this sentiment did not make it into the statement.  This signals that the balance of risks sentiment was not universal.  The minutes now indicate that June is a live meeting.

This morning, we are seeing markets move to discount a hike this summer.  Fed funds futures now put the odds of a June meeting hike at 30%, which are up from 4% last week.  The odds for July are up to nearly 48%.  Short-term interest rates are reflecting this change in sentiment as well.

This chart shows the two -year Treasury yield.  This yield, which is very sensitive to the policy rate, is moving rapidly higher and rose further in light of the minutes.

There were other interesting tidbits in the report.  The staff presented papers about using “macroprudential measures” to deal with financial market distortions and generally came down on the side that regulation will tend to not work as well as needed.  This is the position of Vice Chair Fischer.  This means that if markets become askew and overvalued, tightening might be necessary and cuts might be in order if they get panicky.  Chair Yellen’s public comments suggest she believes macroprudential measures can be deployed successfully to deflate bubbles; she may be a minority on this issue.

We have noted our worries recently about how one-sided the financial markets have become on monetary policy, essentially almost ruling out any rate hikes this year.  That position may end up being accurate, given the uncertainty this election cycle could engender.  Nevertheless, it is clear from the minutes that the Fed is leaning toward raising rates at some point this year.  We see yesterday’s comments as a bit negative for equities and bonds.  The market with the most potential to move is probably the dollar.

The U.S. inventory situation unexpectedly worsened last week as inventories rose by 1.3 mb when a decline was forecast.  Current stockpiles are 541.3 mb.  We expect that the April high of 543.4 mb will prove to be this year’s peak. 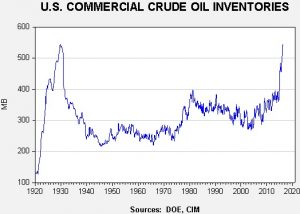 Historically, inventories remain elevated, but they are clearly lagging the usual seasonal pattern. 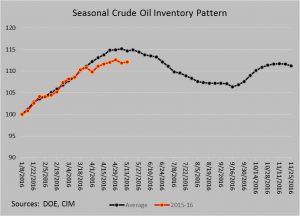 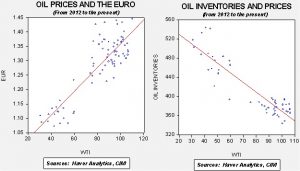 Based on inventories alone, oil prices are profoundly overvalued with a fair value price of $25.36.  Meanwhile, the EUR/WTI model generates a fair value of $53.49.  Together (which is a more sound methodology), fair value is $40.59, meaning that current prices are a bit rich.  Still, for those interested in oil, the Fed is arguably more important for the future of oil prices than the DOE inventories, and the Fed minutes are bearish for oil prices.  Simply put, a rate hike in June would likely lead to a much stronger dollar and weaker oil prices.  For example, a $1.100 EUR/ USD would generate a fair value for oil at $34.53, assuming current inventories.  We don’t expect the FOMC to move rates higher next month, but it is a risk to oil prices.

In other news, we are monitoring news on EgyptAir Flight 804, which apparently crashed this morning.  If it turns out to be a terrorist event, it will tend to boost nationalist fervor and likely help Candidate Trump.  On that topic, today’s FT reports that business lobbying groups prefer Senator Clinton to Donald Trump by a ratio of 2:1.  Although this position is different from what we have seen in the past, as the GOP has been considered the party of capital, Trump is running as a nationalist-leaning populist.  Given the choice between the establishment and populism, business will tend to lean toward the former.