[Posted: 9:30 AM EDT] One question we have been getting for the past couple of months is, “How can the equity market keep rising in the face of all this political turmoil?”  The standard answer is that financial markets focus on the economy, market fundamentals, etc. and only turn to political events when they become significant enough to affect these factors.  Sometimes the impact is immediate; 9/11 is an example.  Other times, there is a cumulative effect where enough things happen over time to “suddenly” change sentiment.  Equity market action before the S&P downgrade of the U.S. debt rating in 2011 is a good example of the cumulative effect.  That is what yesterday looked like.  It appears financial markets have concluded that the president’s political woes are becoming big enough to stall his otherwise mostly market-friendly agenda and may become serious enough to weaken confidence.

We do note that, based on the history of new GOP presidents, we are approaching a period of weakness. 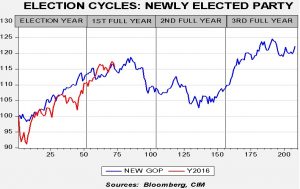 This chart shows the performance of the S&P 500 on a weekly close basis, indexed to the first Friday of the first trading week in the year of the election.  So far, we have been closely tracking the average for newly elected Republican presidents.  Note that there is general euphoria into roughly August of the year after the November elections; from there, we see weakness, which may reflect disappointment in the fact that all that was promised won’t occur.

Although the chart suggests this pullback is a “head fake,” we are concerned that the rally seen in the average may not occur.  In any case, this initial rally is “aging out” and there is more potential downside than upside.  Thus, a broader decline may be in the offing, perhaps in the 10% range.

Meanwhile, Deputy AG Rosenstein appointed Robert Mueller as special prosecutor to investigate alleged Russian ties to the Trump campaign and its administration.  In the very short term, this is good news for financial markets.  It will shift the focus from the White House to Mueller and, perhaps, allow the administration to move on its agenda.  However, this is only a short-term respite.  Special prosecutors can dig a long time.  Mueller is a friend of Comey; he is considered a dogged investigator and incorruptible.  He will not be cowed by pressure.  And, at 79, he has nothing but his reputation to defend.  According to reports,[1] FBI agents were expressing “jubilation” at the appointment.

The president responded by saying he wants a quick investigation to prove he has no ties to the Russians.  If there are none, Mueller’s confirmation will be accepted by both sides of the aisle.  It should be noted that Rosenstein made this appointment independently of the White House[2] and the decision was not universally appreciated.  We view this as Rosenstein signaling his independence from the administration.  There are reports that Jared Kushner wanted to “counterattack.”[3]  He was overruled by the rest of the staff and the president.  Also yesterday, a potentially damaging report emerged in the WP[4] which indicated that House Majority Leader Kevin McCarthy (R-CA) said in a closed door meeting among GOP Congressmen that “there are two people I think Putin pays, Rohrabacher (R-CA) and Trump.”  This conversation apparently took place a month before the election and Speaker Ryan (R-WI) stopped the conversation and swore members to secrecy.  This comment may have been in jest but, even in humor, this revelation, if true, doesn’t look good.

Political scandal isn’t just a U.S. issue.  In Brazil, it is being reported that President Temer was recorded discussing payments to buy the silence of the former legislative speaker Eduardo Cunha.  Cunha is serving a 15-year sentence for corruption; almost a third of Temer’s cabinet is under investigation for corruption.  Temer has denied the allegations but if the recording is proven to be true then he will be in deep trouble.  The Ibovespa fell 1.7% and the Brazilian real plunged 10% from Tuesday’s high.

This chart shows current crude oil inventories, both over the long term and the last decade.  We have added the estimated level of lease stocks to maintain the consistency of the data.  As the chart shows, inventories remain historically high but the seasonal withdrawal phase has begun.  We also note that, as part of an Obama era agreement, there was a 0.7 mb sale of oil out of the Strategic Petroleum Reserve.  This is part of a $375.4 mm sale (or 8.0 mb) done, in part, to pay for modernization of the SPR facilities.  International agreements require that OECD nations hold 90 days of imports in storage.  Due to falling imports, the current coverage is near 140 days.  Taking that into account, the draw would have been 2.5 mb, which is fairly close to expectations.

As the seasonal chart below shows, inventories usually are just starting their seasonal withdrawal period.  This year, that process began early.  Although the actual level of stockpiles remains quite high, we are seeing stock declines at a rather rapid pace.  Assuming a similar drop from this year’s peak of 566.5 mb at the end of March, we will end up at 515 mb by late September.

Based on inventories alone, oil prices are overvalued with the fair value price of $34.27.  Meanwhile, the EUR/WTI model generates a fair value of $46.73.  Together (which is a more sound methodology) fair value is $42.71, meaning that current prices are above fair value but the deviation has been steadily closing in recent weeks.  We note that OPEC looks like it will keep production cuts in place into next year.  That probably keeps oil in a range of $55 to $45, basis WTI.  If the problems in Washington either undermine confidence in the U.S. economy or prompt the FOMC to back away from its tightening stance, the dollar could weaken and that may be the most bullish factor for oil.