Good morning and happy Monday!  It’s a down day for equities this morning.  Our coverage begins with a recap of the situation in Israel, a second look at the retail sales data, and the Atlanta FRB’s GDPNow forecast.  Our update on economics and policy is up next, followed by China news.  The international roundup is next in line, and we close with the pandemic update.

Israel:  Despite international calls for a ceasefire, violence continued unabated over the weekend.  For now, Israel says it will continue operations against Hamas in Gaza.  The IDF is conducting airstrikes against Hamas infrastructure, targeting its office facilities and tunnels that allow Hamas fighters to find shelter and conduct operations.  Hamas has been steadily launching missiles into Israel.  An office building used by the Associated Press was hit by airstrikes over the weekend; Israel claims it was also used by Hamas.  The usual pattern is for international pressure to increase to the point where Israel calls off the offensive.  It is likely that, expecting such pressure, Israel is moving quickly to attack as much of Hamas’s infrastructure as it can before operations end.  The U.N.S.C. met over the weekend to discuss this issue, but no action was taken.

So far, this tragedy has not affected financial markets to any significant degree.  Geopolitically, we note that outside nations are reluctant to get involved.  The Arab states have been mostly quiet.  These nations have been normalizing relations with Israel and are not all that fond of Hamas.  Its ties to the Muslim Brotherhood make Arab state leaders disinclined to help.  Iran has become perhaps the most notable foreign ally, but its ability to assist has limits.  Turkey has made negative comments towards Israel, but we doubt Ankara’s actions will go beyond jawboning.  The difference this time is that foreign nations are bringing less pressure to bear on Israel, meaning that the current conflict may drag on longer than normal.

About that retail sales data:   For the inflation data, we used a two-year change to avoid the base effect impact on CPI.  We did the same thing with regard to the retail sales data, which was flat relative to March.  The longer-term look shows that retail activity is robust. 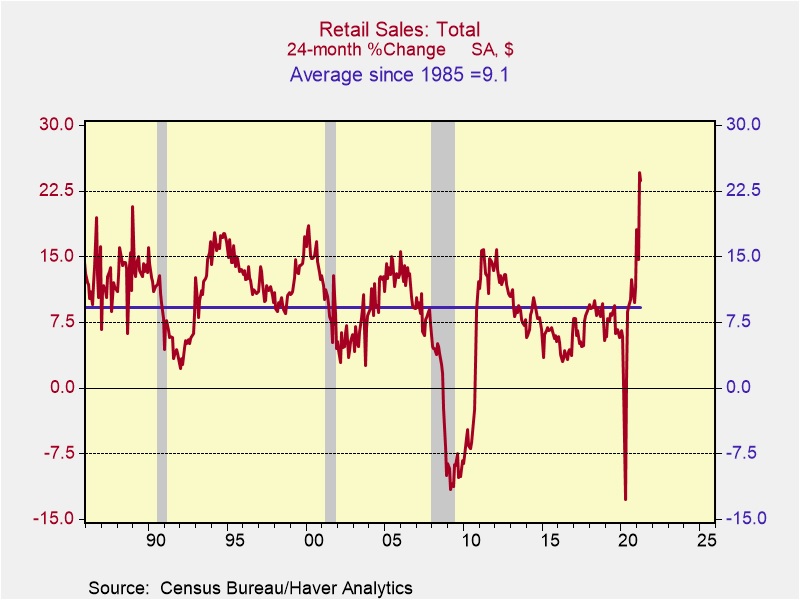 The latest data has the Atlanta FRB’s GDPNow forecast running at 10.5%. 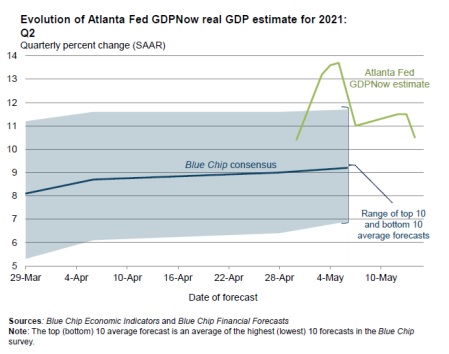 Economics and policy:  Semiconductor issues will persist, and the fog of data may reduce the likelihood that the president’s tax and spending policies will be enacted.

China:   The administration is taking a longer look at Chinese disinvestment policy.

COVID-19:  The number of reported cases is 163,112,783 with 3,380,404 fatalities.  In the U.S., there are 32,941,053 confirmed cases with 585,970 deaths.  For illustration purposes, the FT has created an interactive chart that allows one to compare cases across nations using similar scaling metrics.  The FT has also issued an economic tracker that looks across countries with high-frequency data on various factors.  The CDC reports that 344,503,495 doses of the vaccine have been distributed with 273,545,207 doses injected.   The number receiving at least one dose is 157,485,596, while the number of second doses, which would grant the highest level of immunity, is 123,282,685.  The FT has a page on global vaccine distribution.