[Posted: 9:30 AM EDT] Financial markets are quiet this morning.  This is what we are watching:

More in Italy: Governments are powerful but not omnipotent.  When financial markets turn on a country, it can force unwelcome policy changes.  The populists in Italy are finding this out the hard way.  As we noted yesterday, Italian sovereign yields rose sharply.  Markets have offered little relief today as 10-year Italian sovereigns hit a high yield this morning of 2.15%; on May 4, the yield troughed at 1.71%.  It should be noted that this 44 bps rise in rates has occurred without any tightening from the ECB.  We did get some clarification on the debt write-down; the coalition doesn’t necessarily want the debt written off but wants any bonds held by the ECB as part of QE to not be counted in the debt/GDP calculation,[1] which, of course, is essentially the same thing.  The leader of the League, Matteo Salvini, complained about market “blackmail.”[2]  Although the populists have, to some extent, toned down their rhetoric about the Eurozone (they have dropped earlier calls for a referendum, for example), the coalition is proposing increases in fiscal spending that will break Eurozone rules.  The coalition seems to be daring the Eurozone to sanction them; unlike Greece, Italy is a large economy and the populist leaders seem to be willing to force a showdown.  If the coalition forms and does increase government spending, Germany’s reaction will be key.  We doubt Germany will tolerate Italy’s actions and will press the Eurozone and the ECB to punish Italy.  Although we have been bullish the EUR, for parity reasons, an internal fight will likely be bearish in the short to intermediate term.

Our long-term view has always been that the Eurozone was unsustainable; the single currency was not an economic policy but instead done for political goals, namely, to contain Germany.  The real fight is whether Germany’s or some other European nation’s vision dominates.  The story of Europe since 1870 has been all about the German problem.  Germany is the strongest power in Europe but not strong enough to fully dominate it.  In the long run, we expect the Eurozone to split into workable economic units, with the north and south creating their own currencies.  As we noted yesterday, the “known/unknown” is which group France joins.

No NAFTA[3] today: Today is the deadline for NAFTA talks but it doesn’t look like a deal is in the offing.  The deadline is somewhat artificial—negotiations can continue.  However, in order to put the bill through under the complicated Fast Track Promotion Authority, which passes trade bills on an “up or down” vote without amendments, Speaker Ryan needs to put the bill into place today.  In addition, exemptions for the steel and aluminum tariffs for Mexico and Canada end on June 1; it is hard to argue for an extension without a NAFTA deal.  And, Mexican elections loom on July 1 and polls continue to show that Orbador still holds a dominating lead.  He is a populist and negotiating a NAFTA deal under his government might not be possible.  A breakup of NAFTA would be very disruptive to all three economies.

As the seasonal chart below shows, inventories are usually rising this time of year.  This week’s decline is consistent with the onset of seasonal patterns.  We expect steady stock withdrawals from now into mid-September.  If we follow the normal seasonal draw in stockpiles, by September, crude oil inventories will decline to approximately 424 mb. 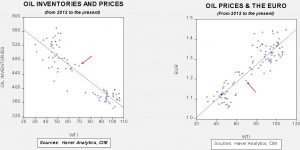 Based on inventories alone, oil prices are overvalued with the fair value price of $63.55.  Meanwhile, the EUR/WTI model generates a fair value of $65.68.  Together (which is a more sound methodology), fair value is $64.68, meaning that current prices are above fair value.  The combination of a stronger dollar and the peak of seasonal inventories has weakened our fair value calculations.  However, we do expect the dollar to weaken in the coming months and oil inventories to decline based on seasonal factors.  Using the oil inventory scatterplot, a reading of 424 on oil inventories would generate oil prices in the high $70s to low $80s range.  At present, we have no reason to believe that inventories won’t follow their usual path so the case for higher oil prices remains, barring a seasonal divergence that increases supply or a sharp rise in the dollar.  We note today that Total (TOT, (ADR) 63.21) warned it will likely pull out of Iran unless it can be guaranteed sanctions relief.[4]  The French oil company is the largest foreign investor in Iran’s energy sector.  If it does pull out, it would represent a significant blow to Iran and signal that, despite all the brave talk, Europe will be beholden to the American sanctions regime.  Issues like this, plus the Venezuelan elections on Sunday, are a major reason why oil prices are running in front of where the dollar and inventories suggest they should be.  In other words, the observed risk premium is reasonable.