Our Comment today opens with an update on the Russia-Ukraine war.  Russian forces remain undermanned and largely stalled out, while Ukrainian forces are launching even more aggressive counterattacks.  We next review a range of international and U.S. developments with the potential to affect the financial markets today, including updated EU economic forecasts that show how the war and galloping energy prices are weighing on growth.  We wrap up with the latest news on the coronavirus pandemic, including a discussion of how China’s strict lockdowns are creating yet another major headwind for the global economy and financial markets.

Russia-Ukraine:  Russian forces continue to scale back their ambitions; their primary focus is now on a minor encirclement of Ukrainian troops in the eastern region of Luhansk and the annexation of occupied areas in southeastern Ukraine.  With President Putin reluctant to formally declare war and announce a slow, politically disruptive general mobilization, the Russian military has been limited to a “stealth mobilization” of reservists that has done little to alleviate its shortfall in available troops.  The Ukrainian military may have high casualties just like the Russian military, but its increasing ability to field modern, technologically advanced equipment from NATO is giving it increased advantages by the day.  The latest reports suggest Ukrainian forces are mounting a strong counterattack against Russian forces around the eastern city of Izyum in an effort to disrupt the supply lines that Russia needs to carry out its effort to take control of the entire Donbas region. 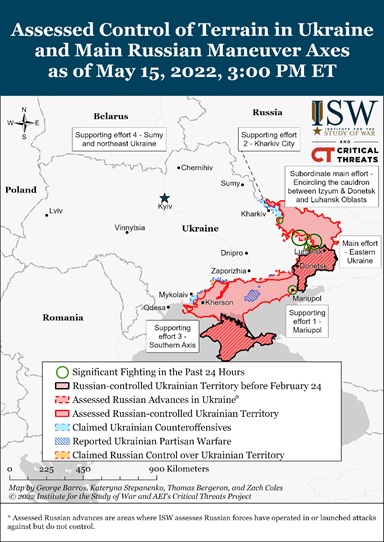 Global Wheat Market:  Wheat prices are surging today after India said it would ban exports of the grain to maintain food security and control prices.  After a bumper crop last year, India had been expected to use its ample stockpiles to help fill the gap left by the cutoff of Russian and Ukrainian supplies because of the war.  With that option now off the table, prices have surged some 5% today to more than $12.40 per bushel.

European Union:  Today, the European Commission issued updated forecasts showing it now expects both the broader EU and the Eurozone to post economic growth of just 2.7% in 2022, well short of the 4.0% growth in the previous forecast.  Growth is expected to fall further to 2.3% in 2023.

Germany:  Over the weekend, Chancellor Scholtz’s Social Democratic Party (SPD) suffered a humiliating defeat in an election in North Rhine-Westphalia, Germany’s most populous state and once an SPD stronghold.  The results illustrate how Scholtz has been damaged by his dithering on German support for Ukraine, especially compared to the tough stand taken by Foreign Minister Baerbock of the Greens.

China:  To help revive the flagging real estate sector, top regulatory agencies said they would let banks cut the minimum mortgage interest rate for first-time homebuyers by 20 basis points.  However, we suspect many Chinese will remain reluctant to buy as long as the government keeps trying to rein in the country’s highly indebted real estate developers.  Chinese real estate firms continue to face high regulatory risk, and more are likely to face bankruptcy or financial difficulties in the near term.

U.S. Economy:  Lloyd Blankfein, former chief executive and current Chairman of Goldman Sachs (GS, $306.99), yesterday said there is a “very, very high risk” that the U.S. economy is heading towards a recession because of factors such as high inflation and the Federal Reserve’s big interest-rate hikes.  According to Blankfein, “If I were running a big company, I would be very prepared for it. If I was a consumer, I’d be prepared for it, [although] it’s not baked in the cake.”

U.S. Stock Market:  Recent regulatory filings indicate that Warren Buffett’s Berkshire Hathaway (BRK-A, $465,011) has deployed tens of billions of dollars into the stock market over the past few months.  The filings show big additions to the company’s holding of major oil companies, such as Occidental Petroleum (OXY, $64.08), and select technology firms, such as Apple (AAPL, $147.11).

The Omaha-based company bought 901,768 shares of Occidental Petroleum Corp. OXY 8.21% last week, according to a regulatory filing. The move likely makes Occidental, in which Berkshire began buying shares in late February, one of its 10 biggest holdings.

U.S. Bond Market:  In an interview with the Financial Times, PIMCO’s chief investment officer said that the recent sell-off in debt markets is creating a buying opportunity, and investors should get ready to snap up oversold corporate obligations.

COVID-19:  Official data show confirmed cases have risen to  521,544,771 worldwide, with 6,264,097 deaths.  The countries currently reporting the highest rates of new infections include Germany, the U.S., South Korea, and France.  (For an interactive chart that allows you to compare cases and deaths among countries, scaled by population, click here.)  In the U.S., confirmed cases rose to 82,468,652, with 999,602 deaths.  In data on the U.S. vaccination program, the number of people considered fully vaccinated now totals 220,597,701, equal to 66.4% of the total population.