[Posted: 9:30 AM EDT] Markets are higher this morning as fears of a trade dispute between the U.S. and Europe dissipate.  That being said, escalating tensions in the Middle East and between U.S./China have caused a rally in bonds. Here are the stories we are following today:

All-in on China: As expected, the president issued an executive order that would effectively ban Huawei (CNY 3.83, +0.052) technology in the U.S.  In addition, it has been reported that sources close to the White House believe President Trump has decided to postpone imposing tariffs on car imports by up to six months.[1]  The delay will likely ease tensions between the president and members of his own party who have come out against additional tariffs imposed on China.  This suggests a trade agreement with China may not be imminent.  With the president’s focus on China there is a reduced chance that he will provoke a trade clash with the EU and Japan over car imports as a two-front trade war could hurt his reelection chances.

Chinese sell-off: It was reported on Wednesday that China’s U.S. Treasury holdings fell to a two-year low in March.  The sell-off has sparked concerns that China could offload its Treasury holdings in order to gain an upper hand in trade negotiations.  These fears have been heightened following the recent trade actions taken by both countries.  Although it is possible that China could use its position as the largest owner of U.S. government debt to sway trade discussions, we believe it is unlikely.  As we have mentioned in the past, China’s U.S. debt holdings is one method it uses to suppress the value of its currency and maintain its trade advantage with the U.S.  Therefore, a sell-off could backfire.

Theresa May resignation: Today, PM Theresa May will meet with senior members of the Conservative Party to discuss her resignation.  Members of her party would like to see her step down immediately, whereas PM May would like to stay on until the Brexit deal has passed through Parliament.  However, she has already failed three times to get the Brexit deal passed, and negotiations with the Labour Party have already fallen apart.  The controversy has not gone unnoticed by markets; the pound slid to a three-month low against the dollar as concerns of a no-deal Brexit continue to grow.

Energy update: Crude oil inventories rose 5.4 mb last week compared to the forecast drop of 1.2 mb.  There was a 1.8 mb draw of the SPR, meaning the actual build was closer to 3.6 mb.

This is the seasonal pattern chart for commercial crude oil inventories.  We are entering the spring/summer withdrawal season next week; this week’s decline is consistent with the normal seasonal pattern.  If this trend continues, we will see weekly draws in stockpiles until the third week of September. 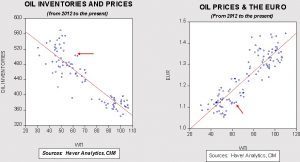 Based on oil inventories alone, fair value for crude oil is $50.61.  Based on the EUR, fair value is $51.45.  Using both independent variables, a more complete way of looking at the data, fair value is $50.34.  This is one of those circumstances when the combined model fair value does not lie between the two single-variable models.  Current prices are running well above fair value.  Geopolitical risks, with this week’s focus on Iran, is adding around $10 to $13 per barrel to crude oil prices.