A DPRK snag?  Yesterday afternoon, the Kim regime turned hostile, calling off talks with South Korea and threatening to cancel the summit meeting with President Trump.  There is a lot of uncertainty around this sudden change in tone.  However, here are some of our observations.  First, the Kims are famous for erratic behavior.  George Friedman of Geopolitical Futures used to call North Korean policy “ferocious, weak and crazy.”  In other words, the regime projected itself as strong (better not mess with us), weak (we are small fry, why bother) and crazy (don’t provoke us, we might do anything).  Kim’s actions are consistent with his father and grandfather’s behavior.  Second, Kim gets more from this summit with Trump than anyone—he gets to put his nation on the world stage with the preeminent superpower.  Thus, we doubt he will walk away.  But, it makes sense that he would try to shape the talks before they begin.  So, indicating that denuclearization ≠ unilateral nuclear disarmament is important for North Korea.[1]  NSC Director Bolton has suggested that North Korea will follow the Libyan model, which is an unfortunate parallel, not one that Kim would adopt.  North Korea wants “goodies” for each step in the denuclearization process.  It does not want immediate denuclearization.  Three, it’s important not to underestimate the impact of China; Beijing would prefer the status quo, so it may be giving Kim incentives to walk away from the summit.  However, our take is that Kim and Moon are really trying to make the Koreas independent.  If so, Kim wants to use the U.S. to distance himself from China.  We suspect Xi understands this goal and is probably trying to thwart it.  We will be looking for any change in China’s trade with North Korea.

Tensions at the FOMC?  Reuters[2] is reporting that a dispute is developing over the issue of “R*Star,” which is otherwise known as the natural rate of interest.  It also describes what we often refer to as the “neutral rate.”  It’s the rate of interest that is neither stimulative nor restrictive.  The concept was first described by Knut Wicksell and suggests that the economy could overheat if policymakers set a rate below the R*Star, while a rate set above could trigger a recession.  R*Star is not directly observable; economists attempt to estimate it based on a number of methods.  The Phillips Curve is one attempt to determine this rate.  Others try to do it through combinations of long-term productivity and labor force growth.  The dispute is over how to define R*Star.  John Williams, recently appointed as president of the NY FRB, argues that slow productivity and labor force growth have led to a structural decline in R*Star, meaning the FOMC may be close to the peak of its rate cycle.  Randy Quarles, a Fed governor, has postulated the economy has a much faster growth potential and thus should have a higher rate.  In some respects, this is a normal “fight” within the Fed, one between hawks and doves.  The difference here is the arena—economists are fighting over R*Star.

On a related note, those who prepared Richard Clarida and Michelle Bowman for their hearings likely raised a glass last evening because the take on their confirmation testimonies was “boring.”  If one is preparing a nominee, boring is the goal.  Although Clarida didn’t offer us much in his testimony, he did indicate discomfort with QE and seemed to suggest he might not have supported the later versions of the program.  As we have noted in the past, we suspect a generation of young economists will write their dissertations on QE and its impact.  Simply put, we really don’t know what it did.  Our position is that the effect was mostly psychological.  It convinced the public that the zero bound was not a barrier for further policy support.  However, the liquidity injected seemed to sit harmlessly (and ineffectively) on bank balance sheets as excess reserves, so the real impact was probably limited.  However, if the Fed forgoes QE, its only recourse at the zero bound is negative nominal interest rates.

Italy: There were a couple of bombshells that emerged from the coalition talks.  First, a draft version of the coalition agreement sketched out a plan that would effectively return Italy to the pre-Maastricht world of a steadily depreciating lira.[3]  Although the plan does not call for Italy to leave the Eurozone, it wants to be freed from fiscal constraints.  Before joining the Eurozone, Italy maintained its economic growth through steady depreciation of the lira and expansive fiscal spending.  Joining the Eurozone did lead to lower interest rates but restricted fiscal flexibility; economic growth in Italy has suffered ever since. 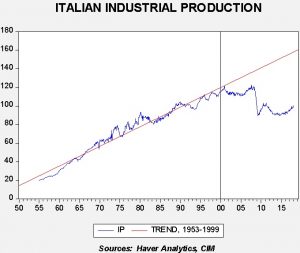 This chart shows Italian industrial production from 1953 to the present.  Note that production rose steadily until Italy officially joined the single currency in 2000.  Since then, production has stagnated.  We don’t disagree with the populist coalition—joining the Eurozone was a mistake.  The question is how does Italy fix this issue?  There are two paths.  The first is a dramatic restructure of the Italian economy, similar to the labor market reforms in Germany (Hartz reforms) that occurred in the last decade.  Politically, this is probably impossible.  The second path is to leave the Eurozone.  We have always suspected this would be the eventual outcome.  The political trends suggest that exit is a growing possibility.

Another bombshell was that the potential coalition wants the ECB to cancel €250 bn of Italian government debt held on the ECB’s balance sheet.  This would probably be illegal under Eurozone rules, which prevents direct fiscal funding by the ECB.  This report has sent Italian yields rising.

This chart shows German and Italian 10-year sovereigns.  Note the spike in the spread.

Italian polls still indicate the majority of citizens want to remain in the Eurozone.[4]  However, it is tied with Greece with the most against the Eurozone and the lowest actual support.  The coalition probably doesn’t have the support to exit the Eurozone yet.  But, if Germany and the EU try to thwart Italy’s attempt to expand fiscally, we would not be surprised to see a swing toward favoring an exit (and we would also expect increasing capital flight to protect against just that outcome).

Would Italy’s departure from the Eurozone be the end of the single currency?  Although losing Italy would be significant, we suspect that it would likely lead to a two-currency bloc.  It would be easy to make the case that Spain, Greece, Portugal, Italy and perhaps some of the Eastern European nations could join a currency bloc, while the Northern Europeans keep the euro.  That scenario would probably lead to a much stronger EUR, while the southern bloc, by design, would depreciate.  The key nation in this scenario is France.  France should probably be in the southern bloc but it would want to stay linked to Germany.  This outcome isn’t imminent but, as history shows, a process like this can go quite quickly once it starts.