[Posted: 9:30 AM EDT] Oil prices are surging this morning as short-term outages dominate the news.  Conflict in the Delta region of Nigeria has reduced production by 0.6 mbpd.  Although Canadian production does appear to be returning, the recent outages will likely lead to inventory declines in the U.S. for at least the next couple of weeks.  As we have noted, the seasonal withdrawal period for crude oil is about to start and we will likely see the supply situation improve over the summer.  At the same time, the current price has already discounted a drop of about 50 mb in U.S. commercial crude oil stockpiles, so the supply situation will have to improve even more to see prices continue to lift.

Unfortunately for oil, and for other markets as well, there is a lurking danger.  Despite numerous comments from regional FRB presidents suggesting that a rate hike could occur in June, fed funds futures put the odds of a hike at 4%.  At the same time, we are seeing the yield curve continue to flatten.

This chart shows the two-year to 10-year T-note spread, which hit its narrowest point since late 2007.  Although we have 95 bps to go to invert the curve (a near certain signal of recession), the narrowing is a worry.  Most of the narrowing is coming from the long end of the curve, which is likely benefitting from foreign inflows; with much of Europe and all of Japan sporting negative sovereign yields, the U.S. looks pretty attractive on a relative basis.

The implied two-year LIBOR rate has not moved significantly higher, which tends to indicate that the markets expect a low terminal policy rate. 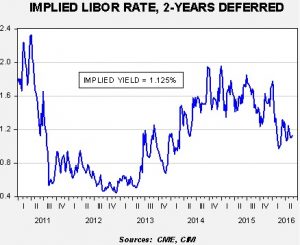 Here is where our worry lies.  When five-star doves like Chicago FRB President Evans and Boston FRB President Rosengren argue that the financial markets are underestimating the odds of a rate hike, it suggests that support for stable policy is weakening.  In general, we assume that three dissenters among the voting members of the FOMC are akin to a no-confidence vote for the chair.  At this point, among the 10 voters, Bullard (St. Louis), George (KC) and Mester (Cleveland) would probably support a rate hike.  If Rosengren, usually a reliable dove, is leaning toward a hike, you could potentially have four dissenters.  Among the permanent voters, only Fischer would probably prefer to tighten, although we don’t see him voting against the chair.  Still, there is enough uncertainty to seriously question the 4% likelihood of a hike that is currently being discounted by fed funds futures.

The GDPNow data from the Atlanta FRB is suggesting a rather robust jump in Q2 growth, especially in relation to Q1. 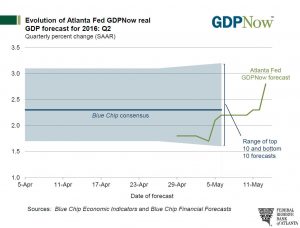 Here are the component changes. 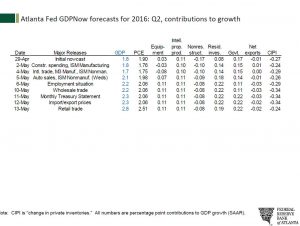 Of the 100 bps rise since the initial forecast, 61 bps are coming from consumption alone, which was reflected in the recent retail sales report.  Of the remaining 39 bps, residential investment, adding 11 bps, accounts for over a quarter of the rest.

The case for standing pat is strong.  International developments remain a worry (today’s China data is adding to worries) and U.S. industrial data is soft (see today’s Empire State report).  On the other hand, all our Mankiw model variations support a rate hike.  The dollar, which was much stronger, has retreated, giving the Fed room to hike.  The real worry is that a rate hike would be a complete surprise to the financial markets and unnecessarily raise market volatility.

This discussion brings us back to oil…if the Fed unexpectedly raises rates and the dollar rallies (which would be highly likely), oil prices are vulnerable to a pullback.  That doesn’t mean a collapse to the sub-$30s lows, but perhaps a drop into the low $40s or high $30s.  It also means the dollar would strengthen and emerging markets would be vulnerable to a pullback.