[Posted: 9:30 AM EDT] Risk markets are under some pressure this morning.  Here is what we are watching this morning:

Clarida to the Hill: Richard Clarida, Columbia University economist and Global Strategic Advisor for PIMCO, testifies before the Senate Banking Committee on his way to a confirmation vote.  Michelle Bowman, a Kansas banking regulator, will join him today in this endeavor.  Clarida is up for the position of vice chair and, given Chair Powell’s lack of academic experience, the vice chair position will be of great importance.  We view Clarida as a moderate on policy and expect him to be easily confirmed.  Bowman will fill the role reserved for community banks; this position routinely votes with the leadership.  Filling out the FOMC is important.  Meanwhile, Marvin Goodfriend’s nomination remains in limbo; we doubt he can get confirmed and expect the administration to eventually find a replacement.

Today in trade: Every day seems to bring new information on trade.  Today’s trends indicate that NAFTA talks, so far, are not progressing fast enough to meet the May 17th (Thursday) deadline.  But, it’s probably too soon to declare negotiations “dead” because Washington seems to only accomplish things when deadlines loom.  The president is trying to navigate the ZTE (ZTCOF, $2.26, delayed) issue.  It appears the White House may be trading ZTE for grain tariffs, backing down on punishing ZTE in return for China not raising tariffs on grain.[1]  There are suggestions that the China hawks may be losing influence[2]; specifically, it appears that Wilbur Ross may have acted rashly to punish ZTE.  Although ZTE acted improperly, the punishment Ross approved was probably overly harsh and prompted the White House to walk it back.  If this is the case, Treasury Secretary Mnuchin is likely becoming a more important influence on trade.  If so, we could see a moderating tone on the trade war front.

Italian populists granted an extension: The Five-Star and League parties asked the Italian president for more time to form a government and the extension was granted.  The policy platform does appear to be coming together but the sticking point is the prime minister.  Neither party has enough power to press for its own party leader so they are trying to find a compromise candidate that both parties can live with.  The possibility of a populist party is putting some pressure on the EUR.

Venezuelan woes: As the state oil company, PDVSA, defaults on bonds, creditors are taking steps to seize assets outside the country.  In an especially crippling move, ConocoPhillips (COP, 69.59) has seized Caribbean tank farms and related export facilities owned by PDVSA.[3]  ConocoPhillips won a court ruling against PDVSA for assets nationalized in Venezuela.  There are reports of oil tankers owned by the company being seized by creditors.[4]  The bottom line here is that PDVSA may find itself unable to export product and crude oil because creditors may seize the asset before it can reach its destination.  Supply disruption from Venezuela may become a bigger issue than Iran for oil supplies.

Summer and gasoline: One of the ways we measure the impact of the price of gasoline is to compare it to the average hourly wage for non-supervisory workers.

The chart on the left shows how many gallons of gasoline the average worker can purchase with an hour’s worth of work.  Thus, the larger the number the more beneficial it is to the worker.  The long-term average is about 8.6 gallons per hour.  We recently fell below 8.0 gallons, suggesting gasoline prices are getting a bit lofty.  The chart on the right compares the aforementioned ratio to consumer confidence.  It’s not a perfect fit but, in general, a high ratio correlates with high consumer confidence.  The recent decline in the ratio is diverging from the current high levels of consumer confidence.  There was a similar pattern around the turn of the century that eventually led to a drop in confidence.

The impact of confidence on the economy is mixed.  It sometimes coincides with stronger retail sales but other times diverges.[5]  However, it does appear that confidence affects voting behavior.  The chart below shows presidential parties, with gray showing Republican presidents.  The relationship isn’t perfect, but we note that confidence declined in the early 1990s and in 2007, leading to changes in power.  Interestingly enough, confidence was mostly elevated at the end of Clinton’s term as well as Obama’s, but neither saw his party hold onto power.  We note recently that the president criticized OPEC for keeping oil prices high.  He may be worried that rising summer gasoline prices might undermine his popularity and hurt the GOP in the midterms.  If oil gets to $80 per barrel or higher, we would not be shocked to see a large SPR release in a bid to ease prices. 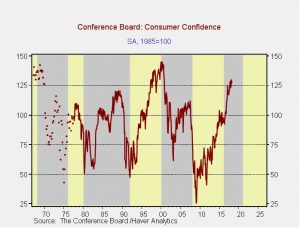 [5] The correlation between the yearly change in the control group of retail sales and consumer confidence is only +32%.