[Posted: 9:30 AM EDT] As expected, the Brazilian Senate voted 55-22[1] in favor of an impeachment trial against President Rousseff.  She will step down from power today and VP Michel Temer will take power.  A trial will be held over the next 180 days.  It ends with a Senate vote.  If less than two-thirds vote to impeach, Rousseff will be reinstated.  Given that 55 votes are enough to impeach, it appears likely that Rousseff will be removed from power.

The financial markets have turned higher in recent months on the prospect of impeachment.  The feeling is that Temer will be better for the economy than the left-leaning Rousseff.

This chart shows the MSCI Brazil index in USD terms.  Since early January, the index is up nearly 72% from low to high.  The market has already discounted much of the good news from impeachment.  Brazil has serious economic problems; GDP is exhibiting negative growth, paced by a plunge in investment spending. 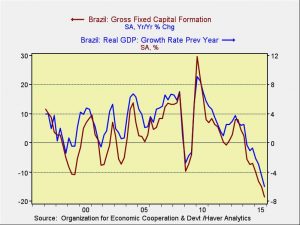 Overall, we would not be surprised to see a bit of “buy rumor, sell fact” market action with Brazil in the next few weeks.

Oil prices are higher again this morning, supported by a bullish International Energy Agency (IEA) report (more on the IEA below).  The group cut its H1 oil surplus due to stronger Indian demand.  Its projected surplus is now 1.3 mbpd, down from 1.5 mbpd in the previous report.  The IEA is projecting demand of 95.9 mbpd this year, up 0.1 mbpd.  Non-OPEC production is forecast to fall 0.8 mbpd, mostly due to falling U.S. output.  OPEC output continues to rise, reaching its highest level since August 2008.  It appears that OPEC output will rise further as the group focuses on increasing market share.  In the short run, outages in Libya, Nigeria and Canada are boosting prices.

The U.S. inventory situation continues to improve as stockpiles declined last week.  Current stockpiles are 540 mb.  We expect that last week’s report, at 543.4 mb, will prove to be this year’s peak. 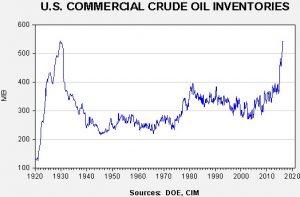 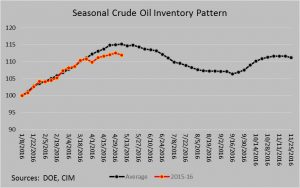 The current level is consistent with early July, improving the odds that we will see faster than normal stock draws.  We are currently about 2.1 mb below where the average would put us.  If that level is maintained, we will be at 498 mb by mid-September.

However, it is important to remember that the dollar is playing a bigger role in determining oil prices. 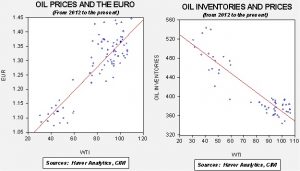 Based on inventories alone, oil prices are profoundly overvalued with the fair value price of $25.82.  Meanwhile, the EUR/WTI model generates a fair value of $54.61.  Combined correlation (which is a more sound methodology) fair value is $41.39, meaning that current prices are a bit rich.  Still, for those interested in oil, the Fed is arguably more important than the DOE inventories for the future of oil prices.  Simply put, a rate hike in June would likely lead to a much stronger dollar and weaker oil prices.  For example, a $1.100 EUR/ USD would generate a fair value for oil of $34.53, assuming current inventories.  We don’t expect the FOMC to move rates higher next month, but it is a risk to oil prices.

A couple of other news items affecting oil have emerged over the past two days.  First, the IEA, a body within the OECD that monitors the oil markets and OPEC, is considering breaking away from the OECD.  The IEA is currently an autonomous organization within the OECD.  The IEA dispute with the OECD appears to center around China.  The OECD has not accepted China as a member even though it is the world’s largest importer of crude oil.  The OECD is uncomfortable with the IEA’s drive for independent relations with China.  This news is more than just a bureaucratic spat.  Although it is not well known, the IEA is the world body that, in a global oil supply emergency, takes legal control of the OECD’s strategic petroleum reserves (SPR).[2]  If we end up in a situation where this action is required and the IEA isn’t part of the OECD, it may be difficult for the IEA to exercise control.  Thus, this isn’t a huge problem now but it could be in the future and, if it becomes a problem, it would be occurring at the worst possible moment.

The second item of note is that Belarus has delivered the Russian S-300 anti-aircraft, anti-missile defense system to Iran.  Given that Belarus is mostly a puppet of the Putin regime, having an ally sell the system offers a thin veil of plausible deniability.  This system is considered one of the world’s most potent anti-aircraft missile systems.  The fact that Iran has acquired this system will reduce Israel’s ability to bomb Iran’s alleged nuclear system; however, it won’t completely eliminate the threat.  It is thought that the F-35, which has stealth capabilities, may be able to elude the S-300.  The Israeli Air Force reportedly has 33 of these aircrafts on order.  Still, the presence of this system will increase the costs of attacking Iran’s potential nuclear facilities.

Finally, Germany is poised to increase its troop numbers for the first time since the Cold War.  The reason given for this reversal of 25 years of force reduction is growing Islamic terrorism, instability in Africa and Russia’s new assertiveness.  However, we suspect underlying this decision is the growing realization that the U.S. will probably reduce its presence in Europe and force the EU to build its own defense.  Polls in Germany show that 45% of its citizens back the decision to increase troop strength, up from 15% seven years ago.  This decision, along with the proposal to boost defense spending, is both minor and major.  Even with proposed spending, Germany’s defense budget won’t reach 2% of GDP, the guideline for NATO nations.  On the other hand, the symbolism of Germany increasing its defense footprint is important and will likely raise concerns in Europe.  This decision probably doesn’t happen without the perceived change in U.S. policy.

[2] We have always had our doubts about this system.  It seems hard to imagine that taxpayer-funded oil supplies in Germany or the U.S. would be directed to Brazil or Portugal because of a global supply shortage.  Although this would be the most effective way to manage global oil prices as it would prevent hoarding, practically, we would not expect the IEA to be able to effectively control the national SPR.