[Posted: 9:30 AM EDT] Media attention remains on the Comey firing.  On this issue, there are three stories we view as notable this morning.

Deputy AG Rosenstein threatened to resign: The WP[1] is reporting that the deputy AG threatened to resign as the narrative emerging from the White House was that the president was simply following the recommendations of the DOJ.  This highlights an emerging characteristic of this presidency.  When things go well, the president takes full credit.  When something goes wrong, an underling is blamed.  It’s a far cry from President Truman’s “the buck stops here.”[2]  All presidents demand some degree of loyalty.  The same is true of all leaders.  An organization will struggle to perform its mission without some level of loyalty.  However, it cannot be the primary virtue because it can lead to abuses; loyalty to the organization becomes an excuse for the end justifying the means.[3]  President Trump appears to put great emphasis on loyalty and the decision to fire Comey is creating a narrative that the primary reason was concern that Comey was not loyal and could not be controlled by the White House.[4]

The optics of meeting with Russian officials looks like an “own goal”: The White House did not allow the U.S. press to cover Trump’s meeting with Russian Foreign Minister Lavrov and Russian Ambassador to the U.S. Sergei Kislyak.  However, the Russian media apparently did get a photo of the president and the two Russian officials.  Under normal circumstances, such meetings are not news—presidents meet with foreign officials as part of the job.  However, the timing of this one is unfortunate.

Polls are slipping: Quinnipiac released a poll[5] yesterday showing rising disfavor with the president.  This isn’t exactly news in that Trump hasn’t usually polled all that well.  However, one of the characteristics of the Quinnipiac polls is that they ask the same questions over a number of weeks so one can observe trends.  Here are a few interesting observations.  In handling the job as president, “strongly disapprove” has moved from 40% to 51% since late January.  The “favorable/unfavorable” responses have seen favorable deteriorate from 44% in late November to 35% now and unfavorable rise from 46% to 58%.  The “honest/dishonest” responses have dropped honest from 42% to 33% (November to now), while dishonest has risen from 52% to 61%.  On the question of leadership as “good/bad,” good has declined from 56% to 41% (November to now), and bad has risen 38% to 56%.  Perhaps the most troubling were the responses to whether “Donald Trump cares about Americans”; yes has fallen from 51% to 38% (November to now), while no has risen from 45% to 59%.  Why does this matter?  The ability to get legislation through Congress needs presidential leadership.  If members of Congress begin to view the president as a political liability, it becomes difficult to move legislation through Congress.  President Obama faced similar issues at the midterms of 2014; Democrat candidates didn’t want him campaigning with them.[6]  It’s also noteworthy that the Obama administration was unable to move major legislation through Congress after 2014 in part due to his unpopularity.  The more unpopular Trump becomes, the quicker his political capital will be depleted.  That means tax reform, infrastructure spending, etc. will not move forward.

Meanwhile, the Fed appears on a path toward at least two more rate hikes this year.  Boston Fed President Rosengren, a reliable dove, indicated yesterday that he sees three more hikes this year.  The financial markets haven’t discounted tightening of this magnitude so this could become a risk factor as the year wears on.

This chart shows current crude oil inventories, both over the long term and the last decade.  We have added the estimated level of lease stocks to maintain the consistency of the data.  As the chart shows, inventories remain historically high but the seasonal withdrawal phase has begun.  We also note that, as part of an Obama era agreement, there was a 0.5 mb sale of oil out of the Strategic Petroleum Reserve.  This was part of a $375.4 mm sale (or 8.0 mb) done, in part, to pay for modernization of the SPR facilities.  International agreements require that OECD nations hold 90 days of imports in storage.  Due to falling imports, the current coverage is near 140 days.  Taking that into account, the draw would have been 5.8 mb, which is even more below expectations.

As the seasonal chart below shows, inventories usually are at their seasonal peak and begin falling about now.  This year, the seasonal decline has started early.  Although inventories remain high, this seasonal level is consistent with July, meaning that we may be on the way to an easing of the inventory overhang.  Last year, we saw a roughly 45 mb draw from the April peak.  Assuming a similar drop from this year’s peak of 566.5 mb at the end of March, we will end up at 520 mb by late September. 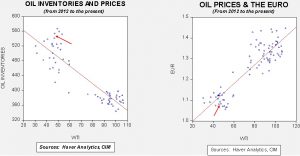 Based on inventories alone, oil prices are overvalued with the fair value price of $33.71.  Meanwhile, the EUR/WTI model generates a fair value of $46.04.  Together (which is a more sound methodology), fair value is $42.04, meaning that current prices are above fair value but the deviation has been steadily closing in recent weeks.  We note that OPEC looks like it will keep production cuts in place into next year, which probably keeps oil in a range of $55 to $45, basis WTI.

[3] One of the best works on balancing loyalty in an organization comes from Herbert Simon. See: Simon, H.A. (1945). Administrative Behavior. New York, NY: The Free Press.