Today’s Comment opens with an update on the Russia-Ukraine war.  Russian forces remain bogged down in the face of strong Ukrainian resistance and their own poor planning, weak execution, low morale, and resource shortages.  We next review a range of international and U.S. developments with the potential to affect the financial markets today, including a trading issue in a key digital currency that probably contributed to yesterday’s sharp market declines.  We close with the latest news on the coronavirus pandemic.

Russia-Ukraine:  Russian forces continue to make very little progress in their efforts to seize more territory in eastern and southern Ukraine, although they are consolidating their control over areas they already hold.  A senior U.S. defense official said Russian forces facing tough Ukrainian resistance are exhibiting extraordinarily poor discipline and morale.  Many Russian troops are reportedly refusing to obey orders, frequently abuse alcohol, and shoot at their own vehicles to avoid going to the frontline.  Russia also continues to face serious force generation problems.  In his Victory Day speech yesterday, President Putin failed to announce the kind of general mobilization that could eventually provide a substantial boost to Russian manpower.  Reports suggest young Russians are receiving draft notices under a “covert mobilization,” but those notices could merely represent the ongoing spring draft, which in ordinary times would run from April 1 to July 15.  We have also seen one document pointing to the call-up of reserves, but under the Russian personnel system, the pool of soldiers available in the reserves is very limited.  In sum, the Russian military is not only suffering from poor planning and amateurish operations but also from growing shortfalls in military equipment, supplies, and personnel.

European Union-Ukraine:  In a development that would be as important for the EU as it would be for Ukraine, EU officials are planning an issue of €15 billion in joint debt to fund financial aid to Ukraine over the coming three months.  Although the debt issue wouldn’t be nearly as large as the groundbreaking mutual debt issued to fund the EU’s massive pandemic relief program, it could point to a certain normalization of joint debt backed equally by all members of the EU.

United Kingdom:  In the House of Lords today, Prince Charles, as heir to the throne, for the first time stood in for his mother to deliver the Queen’s Speech, laying out the government’s legislative priorities for the coming year.  It was the first time since 1963 that Queen Elizabeth had not delivered the speech herself.

South Korea-North Korea:  In his inauguration speech yesterday, conservative South Korean President Yoon Suk-yeol offered economic aid to North Korea if it suspends its nuclear weapons program and starts to denuclearize.  The offer marked a pivot away from his campaign promise to emphasize military deterrence to reduce the threat from Pyongyang.

Iran:  As the Russia-Ukraine war and other factors drive up global food prices, President Raisi said Iran would cut back and reform the country’s bread subsidy system.  Starting in about two months, the government will offer citizens digital coupons, allowing them access to a limited amount of bread at subsidized prices, while the rest will be available at market rates.

Philippines:  As expected, Ferdinand Marcos, Jr., the son of the former dictator, yesterday cruised to a landslide victory in the country’s presidential election.  His opponents fear he could use his power to wage political battles against his family’s adversaries, shield allies from scrutiny, and enrich his associates like his father did before an uprising ousted him 36 years ago.

Sri Lanka:  Prime Minister Mahinda Rajapaksa resigned after months of mass protests against his government’s handling of an economic crisis marked by high inflation and acute shortages of fuel and medicines.  It is not yet clear whether the prime minister’s resignation has been accepted by his younger brother, President Gotabaya Rajapaksa.

U.S. Financial Market:  Amid the widespread carnage in the financial markets yesterday, we took note that the TerraUSD stablecoin, a type of cryptocurrency whose value is supposedly pegged to $1.00, traded as low as $0.94.  The drop in value triggered a wave of selling, which likely contributed to yesterday’s substantial drop in the broad cryptocurrency market. 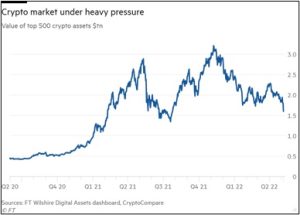 U.S. Labor Market:  With the tight labor market driving up wage rates, teens are now working in greater numbers than any other time since the Great Financial Crisis of 2008-2009.  Federal data show that about one-third of young people aged 16 to 19 are currently working, potentially helping keep some lower-paying firms in business.

U.S. Inflation:  In its April survey of inflation expectations, the New York FRB said respondents saw prices rising at an annual rate of 3.9% three years from now, versus 3.7% in its March survey.  However, those figures remain below the three-year forward expectation of 4.2% registered in the survey last autumn. 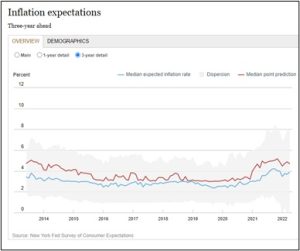 COVID-19:  Official data show confirmed cases have risen to  518,073,573 worldwide, with 6,253,752 deaths.  The countries currently reporting the highest rates of new infections include Germany, France, South Korea, and the U.S.  (For an interactive chart that allows you to compare cases and deaths among countries, scaled by population, click here.)  In the U.S., confirmed cases rose to 81,973,693, with 998,041 deaths.  In data on the U.S. vaccination program, the number of people considered fully vaccinated now totals 220,163,884, equal to 66.3% of the total population.