Good morning, and happy Monday!  What an active weekend!  After spending time watching the skies, worried about falling Chinese space debris, U.S. equity futures are mostly higher this morning. We begin with the Colonial Pipeline cyberattack.  Up next are some thoughts about last Friday’s employment report.  We then have some information about the U.K. elections.  On Wednesday, we get the CPI report, so a few comments about inflation are in order.  General economics and policy news are up next.  China news follows, and international news comes after.  We close with pandemic coverage.

The Colonial pipeline:  The Colonial pipeline is a key piece of U.S. energy infrastructure; about 45% of all product flow from Houston to the Eastern Seaboard moves on this 5,500-mile pipeline.  The pipeline transports about 2.5 mbpd of products from refineries in Texas and Louisiana to the states shown below. 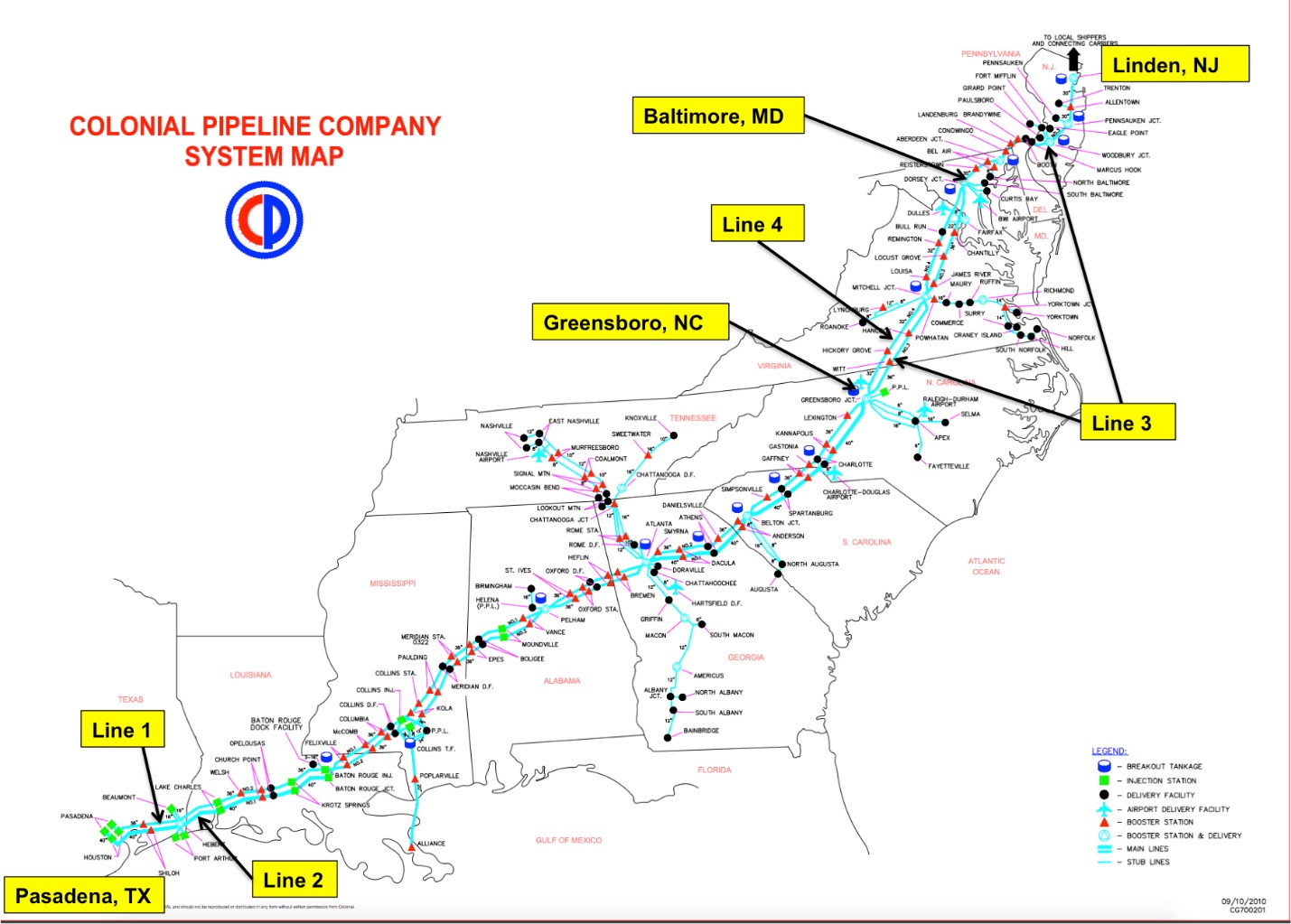 On Friday, the system was hit by a cyberattack that involved ransomware.  Reports suggest that hackers took data on Thursday before deploying the ransomware.  In a sense, this was a two-part attack.  The stolen data was used to threaten the company with a data dump while hackers encrypted parts of the network, demanding payment to decrypt.  The last official statement indicates that the four main lines are still closed.  However, as the map shows, there are numerous lateral lines, and some of them have resumed operations.  Although the culprit hasn’t been officially determined, the Darkside ransomware group is thought to be involved.  It is an eastern European criminal organization that has struck infrastructure before.  The fact that it is a criminal group doesn’t necessarily mean a state sponsor isn’t involved.  This is by far the most extreme attack on U.S. infrastructure and raises concerns that this and other critical infrastructure may be vulnerable to similar actions.

As of this morning, the pipeline remains closed, and there is no clear restart time.  The government has declared a state of emergency that will ease regulations on shipping fuel, and officials are working with the company to restart operations.  If the shutdown persists, gasoline, diesel, and jet fuel prices in the affected states will likely rise.  Over time, the U.S. can ship fuel by railcar and tanker, but these solutions will be costly, and the logistics will take time to manage.  The market reaction thus far has been modest.  Although we did see a spike in product futures prices yesterday evening, prices have been drifting lower since.  If the outage is contained this week, markets should remain calm.  However, if we are not back online by Friday, we will expect higher retail product prices.

The employment report:  Friday’s employment report caught the market off guard.  Pundits, economists, and strategists are all creating narratives to account for the surprise.  Friday’s report may be the largest true forecast miss we have ever seen.  Although the March 2020 miss was epic, it also occurred while lockdowns were being implemented.  Most of the forecasts were in place pre-lockdown.  Here are a few thoughts:

U.K. elections:  It was good news and bad news for PM Johnson.  The good news was that the Tories continue to dominate Labor.  The bad news was that the SNP in Scotland narrowly missed an outright majority (it captured 64 seats with 65 being a majority), but since it is widely expected to make a government with the separatist Green Party, it will control 74 seats in the 129 seat legislature.[1]  It is also expected that Nicola Sturgeon, the head of the SNP, will use this election as a springboard for an independence referendum.  PM Johnson has called for crisis talks on this issue.

So, what happens now?  Expect a long, drawn-out process for a referendum.  PM Johnson opposes granting a separation vote and will use every option to delay it.  Expect Johnson to argue that since the SNP didn’t win an outright majority, it really doesn’t have a mandate.  It will be difficult for Johnson to postpone a vote indefinitely, but the SNP’s lack of an outright win will likely give him fodder to slow the process.

The primary issue driving Scottish independence is the EU.  Scotland wanted to remain; England wanted to leave.  Of course, in any issue like this, personalities matter, and Johnson’s divisive persona makes Sturgeon’s position easier to sell.  However, don’t underestimate the difficulties of independence.  Scotland may want out, but the EU might be reluctant to let it in.  Leaving will require Scotland to accept some of the U.K. debt.  The amount will be negotiated, but its debt level could be high enough to give the EU pause.  In addition, Spain has been reluctant to accept Scotland, fearing its Catalan independence movement would be bolstered by such an event.  The vote to accept a member requires unanimous consent, so Spanish opposition could doom the effort.  Scotland would not have a currency before it joins the EU.  Sturgeon says the country would continue to use the GBP, but that would give the BOE control of its monetary policy without any input.  And, joining the EU doesn’t make entering the Eurozone automatic.  Current polls suggest a narrow plurality would rather stay in the U.K.  However, undecided voters are around 8%, so there is room for the vote to go in either direction.  Although this issue will be on the minds of investors going forward, the GBP is higher this morning on the fact that the SNP didn’t win an outright majority.

Inflation:  We will get our first inflation reading that will matter on Wednesday; this will be the first one that takes into account the base effects of last year’s drop in prices.  Much of the price pressure we see is coming from supply constraints.  Bottlenecks and production disruptions are clearly leading to higher prices.  The unknown is whether households, flush with cash, will spend the money to buy things that cost more or balk at the increases and reduce spending.  Obviously, some items are staples and hard to economize.  Nevertheless, we could see changes in spending patterns as prices increase.

There is no doubt we are seeing reflation and debasement.  The Fed has made it abundantly clear that the focus on inflation control, the policy emphasis since Volcker, has been reversed.  This 1970s-style inflation requires a change in attitude, a fear that prices will be higher in the future, and thus the only option is to buy now, which will solidify price increases.  As we noted last week, it also requires a change in the thinking about inventories.  Stockpiles need to be seen as an asset instead of a cost to be managed.  Our take is that this current inflation event, to paraphrase Obi-Wan Kenobi, “is not the inflation you are looking for.”  We suspect consumers will wait out these price increases, and as supply chains normalize, inflation pressures will ease.  That doesn’t mean inflation isn’t going to be a serious issue in the future.

Economics and policy:  European bond markets and contemplating the end of easy money are in the news.

China:  The EU is steadily expanding its toolbox to contain China’s influence.

International roundup:  Tensions are rising in Israel and the EU, and India starts trade talks.

COVID-19:  The number of reported cases is 158,400,711 with 3,294,657 fatalities.  In the U.S., there are 32,708,028 confirmed cases with 581,755 deaths.  For illustration purposes, the FT has created an interactive chart that allows one to compare cases across nations using similar scaling metrics.  The FT has also issued an economic tracker that looks across countries with high-frequency data on various factors.  The CDC reports that 329,843,825 doses of the vaccine have been distributed with 259,716,989 doses injected.  The number receiving at least one dose is 152,116,963, while the number of second doses, which would grant the highest level of immunity, is 114,258,244.  The FT has a page on global vaccine distribution.

[1] We also note that the breakaway party of Alex Salmond, the Alba party, failed to secure a seat.  This will be taken as clear evidence Sturgeon is the leader of the separatist movement.