[Posted: 9:30 AM EDT] The tariffs were applied at midnight.  Here is what we are watching:

China trade: As the president promised, tariffs on trade with China were applied at midnight.[1]  Interestingly enough, financial markets took the news in stride, with equities up across the world…until a series of early morning tweets from the president indicated a high level of comfort with tariffs, in general, and included a threat to apply tariffs on all goods from China.[2]  The comments reversed equities, sending U.S. futures lower.

As we have watched this issue play out this week, here are some observations we have made:

North Korea: As the Kim regime tests short-range “projectiles” the U.S. has seized a coal ship, which the administration says has been used to avoid sanctions.[7]  We have no doubt that North Korea has been systematically working to evade sanctions, but the timing of this seizure will heighten tensions.

China and grain: China says it will have a bumper soybean crop this year.[8]  If true, that would mitigate the price effects of tariffs on U.S. grain imports.  However, the USDA reports that China could be facing a new foe, the armyworm, a pest that would affect all its crops.[9]  If the pest spreads, it would have an adverse effect on China’s crop production and force it to import more corn and soybeans, just when it is restricting U.S. grain due to the trade conflict.

Mankiw Rule update: The Taylor Rule is designed to calculate the neutral policy rate given core inflation and the measure of slack in the economy.  John Taylor measured slack using the difference between actual GDP and potential GDP.  The Taylor Rule assumes that the Fed should have an inflation target in its policy and should try to generate enough economic activity to maintain an economy near full utilization.  The rule will generate an estimate of the neutral policy rate; in theory, if the current fed funds target is below the calculated rate, then the central bank should raise rates.  Greg Mankiw, a former chair of the Council of Economic Advisers in the Bush White House and current Harvard professor, developed a similar measure that substitutes the unemployment rate for the difficult-to-observe potential GDP measure.

We have taken the original Mankiw Rule and created three other variations.  Specifically, our models use core CPI and either the unemployment rate, the employment/population ratio, involuntary part-time employment and yearly wage growth for non-supervisory workers.  All four compare inflation and some measure of slack.  Here is the most recent data: 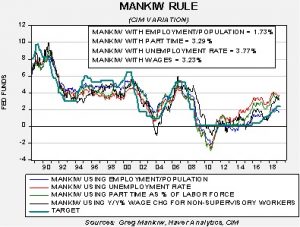 This month, the estimated target rates were little changed.  Three of the models would still suggest the FOMC is behind the curve and needs to be increasing the policy rate.  However, the employment/population ratio suggests a rather high level of slack in the economy and would suggest the Fed has already lifted rates more than necessary.  Given the uncertainty in the economy, coupled with political pressure, we expect the FOMC to remain on the sidelines.

Odds and ends:Treasury Secretary Mnuchin has been more sensitive to the exchange rate issue than the rest of the administration.  He clearly sees that foreigners could respond to tariffs with depreciation and has warned nations against it.  Vietnam has been duly warned.[10]  Canada has just noticed that the capital flight that has led to a real estate boom in select cities may have been with laundered money[11]…what a shocker![12]

[4] Obviously, this is Bill talking; Thomas was not yet on the earthly pale in 1986.