BOE meeting: The BOE results were neutral to hawkish.  Rates were left unchanged, as expected, but the vote was 7-2 with the dissenters voting for a hike.  The press conference and the statement were rather dovish, belying the vote.  Markets took the results as moderately dovish.

Israel v. Iran: Although we don’t think either side wants a full-blown conflict, Israel has launched a series of missile strikes against Iranian targets in Syria.  These targets appear to be command and control centers for Iranian operatives and proxies in Syria.  Iran has retaliated with similar strikes against military targets in the Golan Heights.  The tempo of attacks has clearly escalated since the president withdrew from the Iran nuclear deal.  Escalating tensions continue to support oil prices.  At this point, we would characterize conditions as tense but not necessarily a prelude to an open conflict.  However, the potential for escalation is rising.

Italian government:  The Five-Star Movement and the Northern League are trying to form a government.  It’s sort of a “damned if you do, damned if you don’t” issue for the markets.  A government based on this coalition would be decidedly populist.  Although all parties have moderated their stance on the Eurozone, the populists will push for fiscal stimulus and threaten the German-enforced order in the Eurozone.  At the same time, if the move to form a government fails, summer elections are possible and the odds of an even stronger showing by the populist parties would be elevated.  We have seen a modest rise in Italian sovereign yields; if conditions deteriorate, look for the spread between Italian sovereigns and Bunds to widen.

Fed policy: With the release of the CPI data we can update the Mankiw models.  The Mankiw rule models attempt to determine the neutral rate for fed funds, which is a rate that is neither accommodative nor stimulative.  Mankiw’s model is a variation of the Taylor Rule.  The latter measures the neutral rate using core CPI and the difference between GDP and potential GDP, which is an estimate of slack in the economy.  Potential GDP cannot be directly observed, only estimated.  To overcome this problem with potential GDP, Mankiw used the unemployment rate as a proxy for economic slack.  We have created four versions of the rule, one that follows the original construction by using the unemployment rate as a measure of slack, a second that uses the employment/population ratio, a third using involuntary part-time workers as a percentage of the total labor force and a fourth using yearly wage growth for non-supervisory workers. 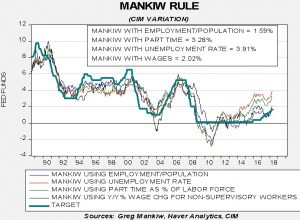 As the seasonal chart below shows, inventories are usually rising this time of year.  This week’s decline is consistent with the onset of seasonal patterns.  We expect steady stock withdrawals from now until mid-September.  If we follow the normal seasonal draw in stockpiles, crude oil inventories will decline to approximately 425 mb by September.

Based on inventories alone, oil prices are overvalued with the fair value price of $64.09.  Meanwhile, the EUR/WTI model generates a fair value of $65.38.  Together (which is a more sound methodology), fair value is $64.31, meaning that current prices are above fair value.  The combination of a stronger dollar and the peak of seasonal inventories has weakened our fair value calculations.  However, we do expect the dollar to weaken in the coming months and oil inventories to decline based on seasonal factors.  Using the oil inventory scatterplot, a reading of 425 on oil inventories would generate oil prices in the high $70s to low $80s range.  At present, we have no reason to believe that inventories won’t follow their usual path, so barring a seasonal divergence that increases supply or a sharp rise in the dollar the case for higher oil prices remains.  We should note that worries over the Iran nuclear deal are supporting oil prices and this factor will likely remain in place for the foreseeable future.