Good morning.  U.S. equity futures are mostly steady this morning.  Our coverage starts with Facebook.  Next is coverage of the U.K. local elections along with other international news followed by our pandemic coverage, including a look at the Biden administration’s decision to temporarily suspend patent protection for COVID-19 vaccines.  Economic and policy news comes next.  We close with comments on China.

Facebook:  Facebook’s (FB, USD, 316.32) oversight board declined to reinstate President Trump to its platform but did say it would review the case again in six months.  The fact that the media treated the news as if it were a key economic release or a Supreme Court decision is notable.  As expected, GOP leaders were displeased, but the bigger issue is why.  As a society, we grant such power to a private company with little regulatory oversight.  We do expect this situation to be addressed at some point.  It is unclear if it will be good or bad for the company or other social media companies.  After all, regulation often solidifies a company’s market position by increasing the cost of entry.

The creation of the oversight board was, in a way, an attempt to shift the burden of decision away from Facebook.  The oversight board has the veneer of independence; the 20-member committee is comprised of political leaders, human rights activists, and journalists and is based in London.  Although nominally independent, the company funds the operation to the tune of $130 million.  Thus, it is hard to say the company has no influence on its decisions.

President Trump isn’t the only political leader who has been a problem for the company.  It has blocked the Myanmar military.  Venezuela’s President Maduro has had his page frozen.  Brazil’s President Bolsonaro has also had posts removed.  Poland and Mexico have called for curbs on the company’s power.

In the end, the plan to create an oversight board to avoid scrutiny has failed.  The board pushed the decision back to the company, suggesting that in six months, it should make a call.  As social media firms have become conduits of speech, they have also become deeply mired in politics everywhere.  In the older media environment, political systems relied on the lack of concentration to allow for a fair dispersion of information.  There were numerous newspapers and rules against concentrating ownership.  In broadcast media, where there were only three networks, the fairness doctrine regulated the way political news was managed.  Social media grew up in a deregulated environment and was not really considered media for a long time.  It looks like avoiding regulation in this arena will be impossible, although there is another alternative…the firms could be broken up, and the creation of a larger number of social media companies, with none dominant, could allow for a freewheeling media.  However, the monopoly profits that the current firms enjoy would be the cost.

U.K. elections:  The U.K. is holding local elections.  Under normal circumstances, this wouldn’t be big news.  But in the post-Brexit world, these elections have become proxies for independence movements.  There will be a close study of the outcomes to see if independence movements in Scotland and Wales gain support.  It will also tell us, to some degree, Boris Johnson’s popularity.  Although we remain favorable on U.K. assets, seeing them as undervalued in the wake of Brexit, the independence issue is a risk that, if it expands, could be a bearish factor for the U.K.

International roundup:  Fish fights, Russian troops, and worries about Peru are in the news.

COVID-19:  The number of reported cases is 155,297,849 with 3,244,849 fatalities.  In the U.S., there are 32,588,066 confirmed cases with 579,280 deaths.  For illustration purposes, the FT has created an interactive chart that allows one to compare cases across nations using similar scaling metrics.  The FT has also issued an economic tracker that looks across countries with high-frequency data on various factors.  The CDC reports that 321,549,335 doses of the vaccine have been distributed, with 249,566,820 doses injected.  The number receiving at least one dose is 148,562,891, while the number of second doses, which would grant the highest level of immunity, is 107,346,533.  The FT has a page on global vaccine distribution.  India’s cases continue to rise.  Although overall U.S. cases are falling, the Axios state map does show a mixed picture of rising and falling cases.

Economics and policy:  Inflation, inventories, and taxes are in the headlines. 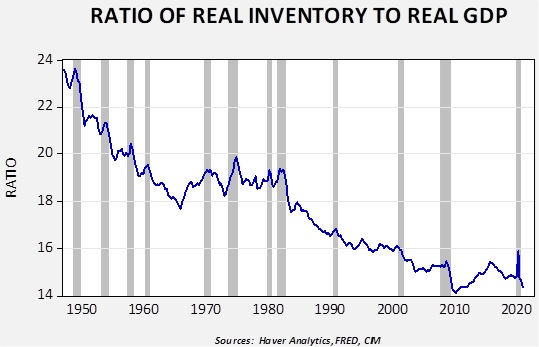