We begin today’s Comment with our update on the Russia-Ukraine war.  Military action yesterday apparently involved no new Russian advances, even as the U.S. warned that Russia is preparing to annex the swaths of eastern and southern Ukraine that it currently occupies.  We next review a range of international and U.S. developments with the potential to affect the financial markets today.  We wrap up with the latest news on the coronavirus pandemic.

Russia-Ukraine:  Russian forces reportedly refrained from staging any new ground attacks in either eastern or southern Ukraine yesterday, apparently in order to regroup and re-equip for future attacks.  Also, Russian operations may still be disrupted by Ukraine’s April 30 rocket artillery strike on a command post of the Russian Airborne and 2nd Combined Arms Army near Izyum.  However, the Russians continue to launch attacks on military and civilian targets throughout Ukraine using missiles, artillery, and aerial bombs.  Separately, a high-level U.S. official said Russia is planning sham elections to annex wide swaths of eastern and southern Ukraine, just as it did after seizing Crimea in 2014.

European Union:  Austrian Foreign Minister Alexander Schallenberg has called for radical changes to the EU’s foundational treaties to expedite neighboring countries’ ability to join and avoid domination by Russia.  Besides signaling a shift from Austria’s traditionally tight relationship with Russia, Schallenberg’s suggestion illustrates the sea change in geopolitical thinking touched off by Russia’s invasion of Ukraine.  Not only has the invasion prompted a likely effort by Sweden and Finland to join NATO, but it could also spur a reinvigoration and expansion of the EU.

European Equity Markets:  Citigroup (C, $48.71) acknowledged that one of its traders had the “fat finger” that sent some European stocks into a sudden, short tumble yesterday.  According to Citi, the employee made an error while inputting a trade order for a basket of shares that included many Swedish stocks.

Australia:  Joining the global fight against inflation, the Reserve Bank of Australia today hiked its benchmark short-term interest rate more aggressively than expected to 0.35% from 0.10% previously.  The increase was the central bank’s first in 11 years.

Israel:  Palestinian militant group Hamas has stepped up a mass-media campaign urging Palestinians in the West Bank and Israel to attack Jews in the wake of clashes between Israeli security forces and Muslims around the Al-Aqsa Mosque in Jerusalem’s Old City.  The renewed violence could threaten stability in the region and weigh on Israeli asset values.

Africa:  Little noticed against the backdrop of the Russia-Ukraine war and high consumer inflation around the world, weak rainfall in the Horn of Africa has produced the region’s worst drought in four decades and put some 20 million people at risk of hunger.  Besides adding to the demand for food from other regions, the drought could also spark market-disrupting political unrest in countries like Ethiopia, Somalia, and Kenya.

U.S. Monetary Policy:  Today, Federal Reserve officials start their latest two-day monetary policy meeting, where they are expected to approve an aggressive 50-basis-point hike in the benchmark fed funds interest rate.  At the meeting’s end tomorrow, they are also expected to detail a relatively quick run-off of bonds on the central bank’s balance sheet.

U.S. Oil Industry:  Even though the Fed is trying to squelch inflation and the tight labor market makes it hard to find workers, high oil prices, touched off by factors such as rebounding demand and the Russia-Ukraine war, have finally prompted an uptick in U.S. oil drilling and more business for oil services companies in the U.S. oil patch.  Recent data show the number of drilling rigs active in the U.S. is now up 60% from one year ago.  Crude production is up more than 8% over the last year. 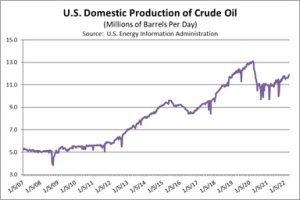 U.S. Labor Market – Unionization:  The National Labor Relations Board said workers at a facility owned by Amazon (AMZN, $2,490.00) in Staten Island, New York, have voted against unionizing, despite last month’s pro-union vote at another Amazon facility close by.  Even though today’s tight labor market has given employees more bargaining power and spurred an uptick in unionization, the result suggests any trend toward representation remains uneven.

U.S. Labor Market – Immigration:  A new policy will address an unprecedented backlog of 1.5 million work-permit applications.  The federal government said most immigrants with recently expired or soon-to-expire work permits would be able to continue working on those documents for up to a year and a half after they expire.  The move will help prevent firms from losing employees at a time when finding replacements would likely be difficult and expensive.

COVID-19:  Official data show confirmed cases have risen to  514,284,882 worldwide, with 6,238,487 deaths.  The countries currently reporting the highest rates of new infections include Germany, South Korea, France, and Italy.  (For an interactive chart that allows you to compare cases and deaths among countries, scaled by population, click here.)  In the U.S., confirmed cases rose to 81,444,332, with 993,999 deaths.  In data on the U.S. vaccination program, the number of people considered fully vaccinated now totals 219,778,035, equal to 66.2% of the total population.