Our Comment today opens with an update on the Russia-Ukraine war, where Russian forces continue to make only limited territorial gains but have intensified their efforts to Russify the areas they already occupy.  We next review a range of international and U.S. developments with the potential to affect the financial markets today.  Finally, we wrap up with the latest news on the coronavirus pandemic, including signs of even tighter lockdowns in Beijing that will continue to weigh on economic activity in China and globally.

Russia-Ukraine:  Russian forces continue to make only limited gains in the eastern Ukrainian region of Donbas and along Ukraine’s southern coast, even as they keep attacking strategic cities such as Kharkiv and Odesa with missiles, artillery, and aerial bombs.  Reports also indicate the Russians are increasingly taking steps to incorporate occupied territories into Russia proper.  For example, Russian sources said stores in occupied Melitopol and Volnovakha are beginning to transition to using the Russian ruble, and British Defense Intelligence reported the ruble would be used in Kherson starting on May 1 as part of a four-month currency transition scheme enacted by the occupation administration.  The measures, which are not necessary or normal in military occupation administrations, suggest that Russian President Putin likely intends to retain control over these areas and that his ambitions are not confined to Donbas.  Meanwhile, Ukraine launched a missile attack against a Russian command post in the northeastern city of Izyum over the weekend, killing at least one more Russian general and several other senior officers and reportedly wounding Russia’s Chief of the General Staff Valery Gerasimov.  The Ukrainian military also claimed its drones have sunk two small Russian patrol craft in the Black Sea. 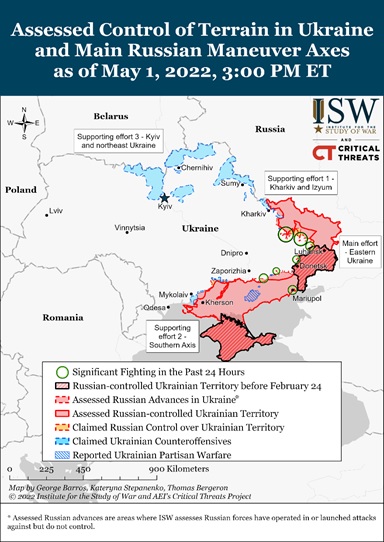 Iran Nuclear Deal:  Despite the distractions of the Russia-Ukraine war, the EU told Iran that it was prepared to make a renewed push to reinstate the 2015 deal, lifting economic sanctions on Tehran in return for restrictions on its nuclear program.  Even though the text of a deal reinstating the program has been virtually finalized, negotiations on it have essentially been frozen since early spring.  EU officials say they are still waiting for Iran to respond to the offer.

France:  The traditional May Day labor marches yesterday were reportedly on the raucous side, as protesters warned newly re-elected President Macron that they want higher incomes, lower inflation, and an end to his proposals to raise the country’s retirement age.

U.S. Monetary Policy:  Federal Reserve officials this week will hold their latest two-day monetary policy meeting, in which they are expected to announce an aggressive 50-basis-point hike in the benchmark fed funds interest rate and detail a relatively quick run-off of bonds on the central bank’s balance sheet.

Global Green Energy:  One little-noticed alternative source of “green” energy is naturally occurring hydrogen, which small, start-up energy firms are already exploring for, or even producing in places like Australia and Africa.  While the gas isn’t renewable, boosters say burning it carries few of the environmental concerns of burning natural gas or other fossil fuels.

COVID-19:  Official data show confirmed cases have risen to  513,890,808 worldwide, with 6,236,772 deaths.  The countries currently reporting the highest rates of new infections include South Korea, Germany, France, and Italy.  (For an interactive chart that allows you to compare cases and deaths among countries, scaled by population, click here.)  In the U.S., confirmed cases rose to 81,365,218, with 993,733 deaths.  In data on the U.S. vaccination program, the number of people considered fully vaccinated now totals 219,729,731, equal to 66.2% of the total population.