Global equities suffered a deep slide overnight; equity futures fell to limit down levels, so we are not sure how far they will decline on the open.  The 30-year Treasury yield broke 1% and the 10-year T-note has fallen below 50 bps.  The JPY is appreciating.  Oil prices fell over 20% as it looks like we are in the midst of the market share war.  At the same time, there is evidence to suggest some of this event may be about a shake up in the Saudi Royal family.  We update COVID-19.  Lots to cover; let’s get at it.  Here are the details:

COVID-19:  The number of reported global infections is now 111,354, with 3,892 fatalities and 62,373 recoveries.  Although the raw data suggests some optimism—the growth rate of infections is slowing, while the recovery rate is rising—that news is being lost amid rising fear and government missteps.  Governments around the world are moving to contain and cope with the virus.

Ok, so where are we now?  If we think back to where all this started, in China, we started tracking the virus in the second week of January.  By late February, we were starting to see signs that the infection rate was slowing.  Currently, China is starting to show signs of recovery, although the rise is rather sluggish.  In comparison to China, the U.S. is about three weeks into this cycle.  The next three weeks will be rough; meeting cancelations will grow, travel will plummet and economic activity will slow.  But, by early to mid-April, we should start to see a slowdown in infections and some indication that the worst of this virus is behind us.  Due to reporting lags, the economic data will be lousy into June, which will still be reporting data from April and May.  Again, policymakers can help here; moving aggressively to funnel money into households remains the best way to support the economy and avoid an official recession.  If policymakers remain timid, the drop in growth will be deeper and the recovery slower.  We don’t expect a timid response, although at this point that position is more based on faith than evidence.

OPEC:  In a surprising development, the Russians refused to participate in OPEC production cuts, citing opposition to losing market share to U.S. shale producers.  Perhaps Russia expected the Saudis to maintain production cuts to prevent a sharp decline in prices.  If so, that assumption was in error.  The Saudis announced sharp price cuts and production increases.  Why is Saudi Arabia “going to the mattresses” over Russia’s action?

Most of the time, the Saudis opt for a moderate oil price policy, which is a price high enough to bring ample revenue but not so high that it destroys demand.  But, if it faces the loss of market share to a key customer, it has, in the past, flooded the market with oil to drive down the price and force its competitor in this key market to surrender.  In 1986 and 1999, the Saudis were losing market share in the U.S.  At the time, the Kingdom of Saudi Arabia (KSA) was worried that if its share fell permanently, the U.S. might not be interested in its defense.  So, in 1986 and 1999, it drove prices to around $10 per barrel until other oil producers agreed to production cutbacks.  Once peace emerged, prices recovered. 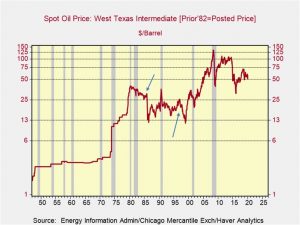 The KSA is no longer interested in defending U.S. market share.  The onset of shale oil and the clear U.S. preference to leave the Middle East means it has other areas to focus upon.  That area is China.  Last year, its oil exports to China jumped 42% which gave it back the #1 position as foreign oil suppler, with Russia as #2.  If the KSA didn’t boost production, it would cede its position to Russia, which it has decided is not in its interest.  Therefore, as we saw in the other two episodes, a sharp decline in prices is in the offing.  We have noted some analysts have been comparing this event to 2014-15, when the KSA seemed to be taking on shale producers only to retreat.  We view this as a faulty comparison.  In that event, the Saudis were not defending market share in a key market.  This event is more akin to the 1986 and 1999 events.  This is going to be a much deeper decline.  A $20 handle on oil (meaning falling below $30 per barrel, WTI) is highly likely.  One area that might benefit?  Natural gas prices may find some support as associated gas production will eventually fall.  However, patience is recommended; oil producers are hedged so it will take a few months for U.S. oil production to start falling.

We would expect Russia to take on the KSA in this fight.  Look for the RUB to fall sharply as Russia tries to reduce operating costs.  The KSA generally doesn’t use exchange rates to boost competitiveness, although it might this time.  In the U.S., the already beleaguered energy sector is facing another rout; high yield debt is at risk as well.

Another item of note:  Crown Prince Salman arrested Prince Ahmed bin Abdulaziz, the brother of King Salman, and Prince Mohammed bin Nayef, the former crown prince.  Prince Abdulaziz is the last remaining “king eligible” son of the KSA founder Ibn Saud, and Prince Nayef was initially the next in line to the throne.  Although CP Salman has been consolidating power for some time, these aggressive actions may signal that King Salman, who has been in ill health for some time, may be approaching death and CP Salman wants to eliminate any potential claimants to the throne.

Odds and ends:  Lebanon is set to default on its debt as its foreign reserves dwindle.  Turkish President Erdogan is visiting Brussels over the current refugee crisis; he wants more money from the EU.  Political turmoil is rising in Bolivia as the current government battles with supporters of the exiled former president.  In Taiwan, the KMT is dropping its Beijing supportive policy which will exacerbate tension with the PRC.