[Posted: 9:30 AM EST] Equity markets remain relatively calm as the ECB decided to leave its monetary policy unchanged.  During a press conference, Mario Draghi stated that even though risks have become less pronounced, global factors are still a threat to the overall stability of the Eurozone.  We believe his statement could be referring to a possible breakup of the Eurozone as well as an increasingly isolationist U.S.  Draghi also stated that even though the inflation forecast increased from 1.3% to 1.7%, the change was largely due to expected rises in energy prices.  He pointed out that core inflation still remains low, although the risk of deflation has more or less dissipated.  In a retort to his critics who criticized the asset purchase program, Draghi pointed to stronger employment numbers as evidence that his policies are having the desired impact.  The euro has remained unchanged, trading at about 1.057, suggesting Draghi’s statements are more or less in line with market expectations.

Although we believe political risks have decreased in recent weeks, we are still skeptical of the reliability of polls.  As mentioned in prior reports, populists can overcome unfavorable poll numbers due to a very loyal and motivated supporter base.  As a result, populist candidates like Geert Wilders in the Netherlands and Marine Le Pen in France may be able to pull off upsets in their respective elections.  A win by Geert Wilders on March 15 could give Marine Le Pen a major boost in April as her supporters will try to replicate populist success in France.  If either Le Pen or Wilders are able to pull off a win, it will likely have a negative effect on European equities as it could substantially increase the likelihood of a Eurozone breakup.  The purchase of German bonds could help hedge against currency risks in the event of a Eurozone breakup.

Earlier this morning, the American Healthcare Act, the Republican replacement to the Affordable Care Act, has cleared its first hurdle by making it out of the House Ways and Means Committee.  Despite this victory, the bill is still unlikely to become law in its current form due to bipartisan opposition in Congress.  The American Healthcare Act, also known as Trumpcare/ Ryancare depending on where you read, has received criticism from Democrats for not doing enough for low-income households and Republicans for not completely repealing Obamacare.  Although we are pessimistic about the bill’s chances of making it out of Congress, if Trumpcare/Ryancare were to become law it could be bearish for equity markets, particularly for healthcare equities.

The price of Brent Crude and WTI has dropped substantially after U.S commercial crude oil inventories rose 8.2 mb, well above the forecast rise of 1.4 mb.

Oil inventories have reached a new record high.  As the seasonal chart below shows, we will likely see inventories hit new highs in the coming weeks.

This chart shows the indexed inventory pattern for the past five years along with this year’s indexed data.  As the chart shows, we are mostly in line with seasonal behavior.  Inventories will tend to rise into the middle of next month and then begin their seasonal withdrawal period. 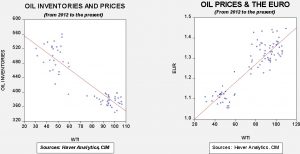 Based on our oil/euro inventory price model, the fair value for oil is $34.04.  Comparing oil prices to the euro yields a fair value of $37.91, and we are down to $29.33 using only oil inventories.  Yesterday’s hard break in prices appears to be the realization that, despite OPEC’s efforts, inventories are not falling enough to justify current prices.  We do expect to see refinery operations rise in the coming weeks which should help ease the growing overhang.  But, as the seasonal chart shows, we still have another five to six weeks of potentially bearish stockpile data.  Further weakness in oil is likely.