[Posted: 9:30 AM EDT] Happy employment Friday!  We cover the data below but the quick read is that it’s mixed.  The payroll data came in very weak (+20k vs. +180k expected).  The unemployment rate dropped to 3.8% from 4.0% last month, and wages rose more than expected.  Market reaction is treating the numbers as bad for the economy—long bond yields and the dollar both fell and equities turned lower.  Here is what we are watching this morning:

Chinese trade: Just as it seemed a trade deal was moving steadily toward fruition, reports emerged yesterday that China is getting cautious.  Apparently, the Chinese side is worried about the monitoring system that could be used by the U.S. to trigger actions against it.  As a result, the summit expected later this month might be delayed, or not occur.[1]  There are a couple of issues here.  First, China’s goal throughout this process has been to buy stuff in key sectors but maintain its industrial policy.  Last year, when Wilbur Ross thought he had an agreement, the president scotched it because he wanted something more comprehensive.  USTR Lighthizer is clearly focused on an enforcement mechanism that will hold China accountable and, not surprisingly, China is having second thoughts about being held in such a manner.  Second, Chinese negotiators may be trying to create daylight between Lighthizer and the president, working on the assumption that the president wants a deal to help his reelection chances.  However, the president does have to carefully weigh the trade issue.  A deal revealed to be superficial just to maintain equity market levels may not help him politically; perhaps an even bigger issue is whether his working class base cares at all about the stock market.  They may prefer a deal that punishes China and probably couldn’t care less about stocks.  So far, we haven’t seen enough new information to change our view that both sides need an agreement[2] and, as such, will come to one that is less than complete.  But, we remain in the realm of probabilities and not certainties.

Chinese trade numbers: China’s export numbers were soft; from last year, February exports plunged 20.7% and imports fell 5.2%.  While both numbers were much weaker than expected, export growth was the slowest in three years.[3]  Analysts are tending to discount the data due to the Lunar New Year disruption, but the drop is large enough to be worrisome.  From our perspective, the decline in imports suggests a weakening domestic economy.  The chart below overlays the manufacturing PMI with the yearly change in imports.  In general, negative import readings are consistent with PMIs under 50. 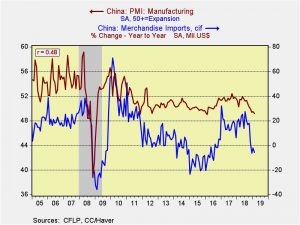 ECB: The ECB surprised the markets with the announcement of new stimulus measures.  Apparently, Draghi caught other members of the ECB by surprise as well.[4]  The ECB’s action did not seem to have the desired effect; European bank shares fell, which were subsidized by the credit operations of the ECB.  In fact, risk markets declined across the board.  The ECB’s economic projections, which triggered the policy action, appear to have spooked the markets by raising the possibility that the European economy is on the cusp of a downturn.  One item worth noting is that the EUR plunged on the ECB’s announcement.  We are watching to see if the Trump administration frames this as a currency depreciation move by the ECB.  If so, it could affect upcoming trade talks.

EU/U.S. trade talks: Although there is some caution regarding the U.S./China negotiations, the talks with Europe look downright worrisome.  EU negotiators are clearly indicating they have no interest in a broad (read: agricultural products) trade agreement.[5]  We doubt the administration will accept that outcome.[6]  The immediate effect of a “second front” on the trade war would be dollar strength against the EUR; combined with the easier stance of the ECB, it could lead to a much softer Eurozone currency.