[Posted: 9:30 AM EST] After a torrent of news this week, it’s comparatively quiet this morning.  Here is what we are watching:

ECB: The ECB meets today and the statement contained a surprise—the central bank has dropped its pledge to expand QE if needed.  This announcement signals the beginning of tapering.  On the news, the EUR jumped, Eurozone interest rates rose and European equities weakened.  To some extent, this decision shouldn’t have been a surprise.  The bank has been saying for some time that QE would eventually be coming to a close.  The market’s reaction does suggest that even the most modest change in ECB policy accommodation is seen as hostile.  But, the reality is that dropping this pledge isn’t a big deal.  Policy remains easy and this decision merely affects forward guidance and not current policy.

During the press conference, ECB President Draghi announced the bank increased its GDP forecast for this year to 2.4% from 2.3%, and lowered CPI forecast for next year to 1.4% from 1.5%.  In the Q&A, Draghi indicated that the decision to remove the QE expansion language was unanimous.  But, the rest of the commentary was not hawkish and the EUR fell from pre-press conference highs.  The currency is off its highs but remains above the intraday lows.  Overall, as we noted above, the ECB is preparing to taper but does remain very accommodative.

Trade: According to numerous reports, the GOP establishment is working furiously to reduce the impact of the steel and aluminum tariffs.  It appears that Canada and Mexico will not be penalized due to their cooperation with the U.S. on security, and the EU is lobbying for similar carve-outs for NATO.  The situation with trade remains fluid.  We will continue to monitor how the administration deals with trade but the worst case outcome is stagflation—trade impediments that lift inflation and slow growth.  To put it in terms related to this week’s AAW (see gray section below), trade interference shifts the aggregate supply curve higher and toward the “y” axis.  In other words, inflation is higher at each intersection of supply and demand.

Beige book: The FOMC recently released its economic report by region.  The anecdotal evidence suggests that wage pressures are rising.  We have no doubt that wage pressures are rising but, so far, we have not yet seen widespread acceleration of wages.  We suspect that much of this talk is from businesses complaining about not being able to find workers at prevailing wages.  However, wage growth itself remains around 2.4% (for production and non-supervisory workers, the majority of employment).  The chart below details the issue. 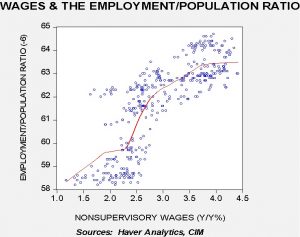 This is a scatter chart with the employment/population ratio, advanced six months, and wage growth for non-supervisory workers.  We have placed a nearest neighbor fit line.  Note that wages tend to rise quickly when the employment/population ratio moves from 58% to 60%; the slope then changes to nearly vertical, meaning that the ratio can rise from roughly 60% to nearly 62% without significant wage increases.  Labor markets don’t tighten significantly until around 62%, when wage growth accelerates significantly.  With the current ratio around 60%, this analysis would suggest there are still workers available and the threat of accelerating wages is not imminent.

Russians in Britain: Former Russian spy (and double agent) Sergei Skripal and his daughter remain hospitalized in the U.K. after an apparent attack by some sort of nerve agent.  Skripal had become an agent for MI-6 and is said to have provided the names of Russian agents working in Europe.  He was detained and jailed in Russia until 2010, when he was part of a spy swap.  Skripal was pardoned a year later.  He and his daughter were found unresponsive on a park bench, and the policeman who responded first showed signs of nerve poisoning and was also treated.  Both Skripals remain in critical condition.  The British continue to investigate; although we suspect Russian involvement, the May government will need undeniable evidence before it will respond.  This isn’t the first time Russian security services have executed Russians in the U.K.  Former FSB officer Alexander Litvinenko was poisoned with polonium-210 in 2006.  If it is determined that Russian security services attacked the Skripals, it remains to be seen how Her Majesty’s government will respond—we would expect an expulsion of diplomats.

As the seasonal chart below shows, inventories are usually rising this time of year.  What we are seeing is very bullish—the usual seasonal build in stockpiles isn’t occurring this year.  The longer this continues, the more fundamentally bullish it becomes; thus, even with the higher than expected build this week, it is important to realize that stockpiles are well below where they should be.

Based on inventories alone, oil prices are undervalued with the fair value price of $65.53.  Meanwhile, the EUR/WTI model generates a fair value of $75.20.  Together (which is a more sound methodology), fair value is $72.08, meaning that current prices are below fair value.  Oil prices sold off yesterday despite the modest rise in stockpiles due to rising domestic production.  The DOE’s weekly report indicated that production rose to 10.369 mbpd, a new record.  Still, the strong level of output isn’t going to inventory and we have doubts that this production can be maintained without an increase in rigs in the near future.  Thus, we look for tightening supplies and higher prices in the coming months.