[Posted: 9:30 AM EST] Global equity markets are taking a breather today after an impressive rally.  Commodity prices have been rallying as well.  As noted below, China’s trade data came in a bit sloppy, with exports down 25.4% from last year.  However, all Chinese data is difficult to read in the first two months of the year due to variations in when the Chinese New Year holiday begins.  For example, last year the holiday came late and firms tended to increase exports before the holiday, making this year’s comparison difficult.  If this is the reason, March exports should show a strong yearly rebound.  Imports were down 13.8% from last year.  Commodity import volumes did show some improvement, which likely reflects the Chinese position that raw material prices are attractive.  That sentiment partly accounts for the recent rebound in commodity prices.

As we warned yesterday, the Fed hawks are surfacing.  Vice Chairman Fischer suggested the U.S. is starting to see the “first stirrings” of inflation.  He also made a spirited defense of the Phillips Curve, suggesting that it isn’t dead, just flat.  In other words, the relationship between inflation and employment still stands but has become less sensitive over time.

The following is another interesting labor market chart. 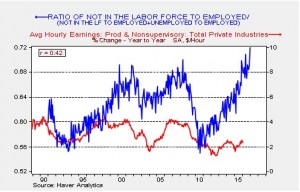 This chart shows the ratio of workers who used to be outside the labor force but are now employed divided by the sum of these same workers plus workers who were already in the labor force and are now employed.  When the ratio rises, more workers are being employed from outside the labor force.  To be in the labor force, one must either be working or looking for work; the latter are the officially “unemployed.”  Once someone stops working and looking for work, they officially leave the labor force.  The above data shows an unusually high degree of workers who were not in the labor force entering employment.  In the past, when this ratio hit about 0.68, wage growth was averaging about 4% per year.  So far, despite these flows from discouraged workers to employment, wage growth has remained soft.  In other words, firms have been able to draw workers from the pool of discouraged workers without lifting wages.  There is a plethora of explanations why wage growth has been sluggish.  In fact, the San Francisco FRB recently published a study[1] suggesting that retiring baby boomers may be to blame.  As older workers retire, presumably at near-peak wage levels, they are replaced with new workers making less money.  The paper argues that the sluggishness of wage growth may not be due to slack but due to a generational shift, and so the labor market is actually rather tight.  Although we suspect there are other explanations as well, this one does solve a couple of mysteries.  First, if depressed wage growth is due to this generational shift, it would also explain why productivity is so weak.  The newer workers are less trained than the retiring baby boomers they are replacing, thus dragging down productivity.  Second, it would explain Fischer’s “flat” Phillips Curve theory in that wage growth is weak because this generational shift is to blame.

Overall, the FOMC is navigating an environment of rather difficult structural divergences.  For the most part, the committee does seem aware of how treacherous it is and so we expect the Fed to maintain a bias toward tightening but move very cautiously in an attempt to avoid a policy mistake.