[Posted: 9:30 AM EDT] Equities are lifting on the back of the ECB.  Here is what we are watching this morning:

ECB: The ECB went a bit further than expected in its statement.[1]  There was no change in the policy rate but the statement indicated there will be a third series of long-term credit operations, which will commence in September and last two years.  Essentially, this is another round of QE.  And, the rate tightening is extended into the future as well.  The action was expected at some point because the Eurozone economy has been near recession levels in recent months, but the announcement wasn’t expected until later this year.  By moving faster than expected, the ECB is signaling that it is worried about the economy and feels the need to act.  Eurozone bond yields declined,[2] equities lifted modestly and the EUR fell.

In the press conference, Draghi announced that the ECB had downgraded both growth and inflation prospects,[3] which gave rise to the policy easing.  Although the policy measures are new accommodation, Draghi did note that they are time dependent.  In other words, they have a deadline.  That factor has reduced some of the market optimism that occurred after the statement.  We suspect they are time dependent because Draghi’s term ends in October and he doesn’t want to put a time-indeterminate policy on his successor.  Then again, accommodation that expires due to a calendar date and not based on economic and financial conditions has less impact.

Trouble in Riyadh?  The Guardian[4] reports a growing rift between CP Salman and his father, the king.  According to reports, the CP has been making appointments and taking steps without the approval of King Salman.  The king was recently in Egypt and, in a sudden move, reportedly sent his security detail home and replaced them with his own loyalists.  CP Salman tends to act fast and boldly, a major shift from the way Saudi kings have behaved over the past three decades (although, in the early years after the death of Ibn Saud, there was much intrigue and action).  There is always the potential that the CP could “get out over his skis” and need to be reined in by the king.  However, if the king has concluded that his son is trying to oust him, it could trigger a showdown and perhaps both patricide and regicide could occur.  Instability at the apex of the Saudi royal family would be a profoundly bullish event for crude oil, at least in the short run.

Beige Book: The Fed’s Beige Book, an anecdotal report on the economy from each of the 12 FRB district banks, suggests that moderate growth was seen in 10 of the 12 districts.  Philadelphia and St. Louis both reported “flat” economic activity.  Philadelphia and Richmond tend to be sensitive to actions in Washington, so the government shutdown may account for the lackluster growth reported in the former.  In all, six of the 12 did indicate there were comments about the shutdown affecting district economies.  Weather issues also affected the economy.  Tight labor market conditions were unanimously reported.  This report seldom contains major surprises but it does confirm recent data indicating a softer economy.

Regulatory easing: The Fed and the Financial Stability Oversight Council are adjusting the crisis-era regulations.  Stress tests on banks are becoming less “pass/fail,” which means the market impact will be reduced.[5]  Although there has been some hand-wringing over this easing, our take on the stress tests was always that they were mostly window dressing.  Financial crises are usually created by overconfidence, Minsky’s adage that “stability breeds instability.”  Stress tests examine known risks but it’s the unknown risks that lead to problems because they are nearly impossible to predict.  To sniff out a “black swan,” one mostly needs to see a problem that no one else thinks is an issue.  It is highly improbable that anyone involved in testing the official stress tests will look for such things or assume an outlier.  At the same time, it does highlight the new members of the Fed and their tendency to support deregulation (see below). 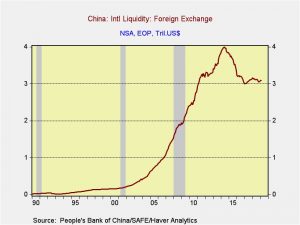 A political trend we are watching: Since the time of President Trump’s election, our working assumption has been that the president himself lacks an ideology but correctly perceived the rise of populism and used it to get elected.  But, in reality, he wanted to placate both the populists and the establishment.  As a result, we end up with inconsistent policies of tax cuts and deregulation (supported by the establishment) along with deglobalization, which includes anti-trade and anti-immigration policies (supported by the populists).  It is difficult to serve two masters, and, the longer time passes, the harder it is to maintain that position.  Yesterday, populist media figures expressed disappointment with the president, a rare occurrence.[6]  As has been discussed at length, the president uses the equity market as a real-time indictor of the success of his administration.  However, policies that support equities are not populist, but establishment.  If Trump wants a stronger equity market, he will relax immigration restrictions and undercut the strength of trade impediments.  But, if key populist media figures determine that he is “going astray,” then he risks losing his working class base.

A bit of technical analysis: Although we are not technicians, the older of us did spend years in commodity research and has a working knowledge of chart analysis.  Equity markets are looking like a correction is coming.

This is a chart of the S&P 500.  The lower sectors of the chart are momentum indicators—specifically, the RSI and stochastic.  The RSI has reached overbought levels as has the stochastic.  Merely reaching those levels doesn’t necessarily mean that prices are about to roll over, but when momentum slows from a very high level then the likelihood of a market decline increases.  We see support around 2600.  In Monday’s comment, we reported that retail MMK levels remain elevated.  Simply put, the rally seen this year appears to have had only modest retail participation.  That analysis, coupled with the above chart, suggests that we will likely remain rangebound until retail returns.

Brexit: It appears London and Brussels remain at an impasse on the Irish backstop.[7]  The vote will be held next week.  Current expectations suggest that either May’s plan will pass or Brexit will be delayed.  However, there is still the chance of a hard Brexit that the market could be underestimating.

Facebook (FB, 172.51): As our regular readers know, we only comment on individual equities when the actions of a company reflect or affect a macro issue.  Yesterday, CEO Mark Zuckerberg made an announcement over privacy policy.  By itself, this is of no interest to us, but what he seems to be signaling is a change in the company and its flagship product.  One of the developments we have noted is the evolution of WeChat, a product of Tencent (TCEHY ADR, $45.93).  WeChat is becoming a universal app—one can pay bills, chat with friends, make appointments, play games, etc.  Essentially, mobile users might not need any other application on their devices.  Facebook’s announcement appears designed to duplicate that model.  This bears watching because, if successful, it may allow the company to further dominate the mobile market and will likely trigger both regulatory and competitive responses.[8]

Venezuela: The Maduro regime detained and later expelled a U.S. journalist.[9]  He also expelled a German diplomat.[10]  The diplomat, Daniel Kriener, had met Juan Guaido at the airport when he arrived on Monday and the diplomats prevented Maduro from arresting Guaido.  The fact that Maduro is expelling Kriener suggests he did intend to risk a showdown with the U.S. and the diplomats prevented such action.

This is the seasonal pattern chart for commercial crude oil inventories.  We would expect to see a steady increase in inventories that will peak in early May; the pattern coincides with refinery maintenance.  This week’s recovery does make up for last week’s unexpected decline but, given that there is a usual increase each week, we are still at a deficit injection to inventory levels for the season.  Overall, the data was bearish but not terribly so.

Based on oil inventories alone, fair value for crude oil is $56.39.  Based on the EUR, fair value is $53.76.  Using both independent variables, a more complete way of looking at the data, fair value is $53.86.  By all these measures, current oil prices are at the high end of fair value.   Without some dollar weakness soon, oil prices will likely be rangebound until spring.

India is asking Washington for an extended waiver on Iranian oil imports.  The current waiver ends in early May.[11]  We will be watching to see if the U.S. gives India the waiver; if the administration acquiesces, we would expect others to ask as well, which would be bearish for oil prices.