[Posted: 9:30 AM EST] There are two issues we want to discuss this morning, China and monetary policy as it relates to Friday’s employment report.

China: The National People’s Congress meetings began on Saturday and a clear signal is being sent—restructuring is being put on the back burner and the country is going for growth.  The GDP target is being set at a range of 6.5% to 7.0%, which is overstating growth (most analysts put Chinese growth around 4.5%), but suggests that the Xi government continues to believe that its legitimacy (and the CPC’s) rests on delivering strong growth.  Both fiscal and monetary levers are being deployed, with a bigger focus on the former.  The official deficit is forecast to rise to 3.0% of GDP from 2.3%; including off-balance sheet items, the actual deficit will likely rise to 4.5% from 3.9%.  Tax cuts and deductions are being adjusted to support household consumption.  Monetary policy will remain accommodative.  Overall, it appears that China is using policy to boost growth.  Ultimately, this will almost certainly mean higher levels of debt accumulation.  This isn’t a long-term solution and it suggests that Chairman Xi doesn’t feel comfortable enough to lower growth to sustainable levels to curb debt expansion and shift the economy toward consumption and away from investment and exports.

China’s focus on growth may be placing a floor under commodity prices.  Although the broad indices are not showing a major recovery, the CRB commodity index data suggests that prices are trying to bottom.

Over the past month, there has been a rebound in commodity prices.  It’s hard to make a case for returning to mid-2014 levels, which would likely take an OPEC agreement and a doubling of oil prices.  However, if China is going to boost growth, investors may be willing to shift funds to commodities which, as the chart above shows, have been hit hard over the past 18 months.

China’s foreign reserves fell further, to $3.202 trillion, a bit better than expected.  Forecasts were calling for $3.19 trillion.  Net capital outflows (gross outflows net of the trade surplus and currency adjustments) were probably around $65 bn in February.

Since peaking in mid-2014, reserves are down 19.8%.  The BIS reports that most of the outflows appear to be Chinese firms paying back dollar loans.  If so, that is much less of a problem than capital flight.  However, the real estate markets in British Columbia, California, New York and Australia do suggest that there is some degree of capital fight.

The bottom line is that if China is determined to grow by further debt expansion, it could be bullish in the short run for global growth, commodity prices and emerging markets.  We don’t think that this is a long-term solution.  Eventually, China will run out of debt capacity, but that probably isn’t an immediate concern and so we may see some growth acceleration as the year continues.

Employment: Friday’s employment data was unusually strong as the labor force is showing signs of expanding. 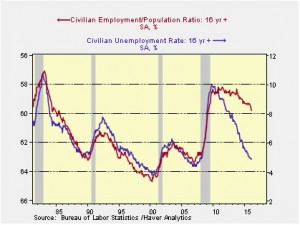 Note how the gap between the employment/population ratio and the unemployment rate has narrowed.  This trend suggests that formerly discouraged workers may be finding an attractive enough labor market to rejoin the workforce.

That improvement will likely spur the FOMC to return to tightening.  Using the employment data and assuming that February core CPI will be in line with January, we can make a tentative update to our versions of the Mankiw rule model.  This model attempts to determine the neutral rate for fed funds, which is a rate that is neither accommodative nor stimulative.  Mankiw’s model is a variation of the Taylor Rule.  The latter measures the neutral rate by core CPI and the difference between GDP and potential GDP, which is an estimate of slack in the economy.  Potential GDP cannot be directly observed, only estimated.  To overcome this problem, Mankiw used the unemployment rate as a proxy for economic slack.  We have created three versions of the rule, one that follows the original construction by using the unemployment rate as a measure of slack, a second that uses the employment/population ratio and a third using involuntary part-time workers as a percentage of the total labor force. 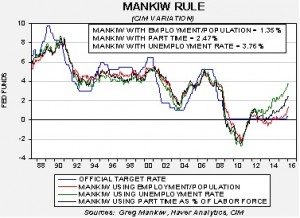 Using the unemployment rate, the neutral rate is now up to 3.76%, suggesting the FOMC is well behind the curve.  Using the employment/population ratio, the neutral rate is 1.35%, indicating that, even using the most dovish variation, the FOMC needs a rate hike of nearly 100 bps to achieve neutral policy.  Finally, using involuntary part-time employment, the neutral rate is 2.47%.  The lift in the employment/population ratio suggests the economy is heating up and that the Fed could move rates higher.  Although wage growth was modest, that may be a quirk in the calculation.  The reporting period fell before the 15th of February, which tends to underestimate growth; thus, don’t be shocked by a reading of 2.6% or a bit higher in March.

If Fed tightening talk begins to surface, we would expect the dollar to rise and risk assets to suffer.  That won’t be a problem for the March meeting, but could become an issue later this spring.  Currently, the financial markets are not prepared for a hike; fed funds futures estimate only a 44% likelihood of an increase at the June meeting and that is probably too low given the employment data.