[Posted: 9:30 AM EST] There were two news stories of note over the weekend.  First, President Trump accused the previous administration of wiretapping his campaign.  This is a very significant charge, akin to Nixon’s “plumbers” breaking into the Democratic National Headquarters.  The FBI and the former Director of National Intelligence have denied the charges.  James R. Clapper, the former Director of National Intelligence, was on the Sunday news shows denying that any such activity took place.  Unfortunately, Clapper’s veracity is seriously in question given that he gave false testimony to Congress in 2013 related to the NSA’s program to capture phone data on U.S. citizens.

We don’t know whether this happened or not.  There was clearly some surveillance of the campaign tied to Russia; that’s why Michael Flynn is no longer in the White House.  However, we do know that any time spent by Congress or the White House investigating this issue is a distraction from fulfilling the president’s agenda.  And, since political capital is perishable, delays increase the odds that less will get done.

We have updated our election cycle chart.  The blue line in the chart below shows the rebased S&P 500 Index behavior for a new GOP administration.  The red line shows the current situation.  So far, the pattern is holding reasonably well.  In fact, the current level has gotten a bit ahead of itself recently.  Much of the surge is based on assumptions that the president will accomplish tax reform and deregulation.  If the administration finds itself bogged down by other issues and the agenda’s momentum stalls, it will be hard to keep the market up as we head into the latter half of the year. 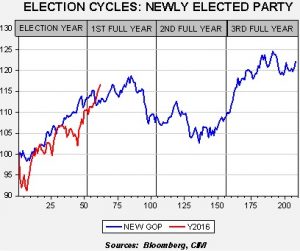 The other issue is North Korea, which we will discuss in the most recent WGR to be published later today.  In our report, we take a look at the recent assassination of Kim Jong Nam, the older brother of the current leader of the Democratic People’s Republic of Korea, Kim Jong Un.  North Korea launched four ballistic missiles over the weekend, three of which fell in Japan’s exclusive economic zone in waters off the island nation.  The launch coincides with annual military drills that South Korea and the U.S. are about to conduct.  According to reports, North Korea is improving its missile technology and will, in time, be able to reliably reach the U.S. with an intercontinental ballistic missile.  The U.S. is considering deploying the Terminal High Altitude Area Defense (THAAD) system, which could shoot down any North Korean missiles that are aimed at South Korea or Japan.  It probably wouldn’t be able to shoot down a North Korean missile aimed at the U.S.  We note that the weekend NYT reported that the U.S. has tried to deploy cyberweapons to disrupt the North Korean missile program; although we have seen a series of failures in recent years, it is clear that progress is being made.

North Korea has become a nearly unsolvable problem.  Although the U.S. would probably prevail in a conventional attack against the Hermit Kingdom, the costs of war would be high.  South Korea would suffer tremendous damage and China may come to the aid of its ally like it did in the first Korean War.  Simply put, as long as North Korea isn’t a direct threat to the U.S., there is little stomach for triggering a costly war.  However, if North Korea sufficiently threatens the U.S., the cost calculus will change.  We continue to closely monitor conditions in North Korea.  So far, financial markets are taking this all in stride.  After all, if North Korea were an imminent threat, the Japanese yen would be collapsing.

Finally, we note that the CPC has been meeting in Beijing in anticipation of the important autumn meetings that will “re-elect” Xi Jinping to a second term.  Today, Li Keqiang, the premier of China (equal to a U.S. VP), lowered the GDP growth target to 6.5%.  That target is still quite lofty and probably unsustainable.