[Posted: 9:30 AM EDT] It’s a very quiet news morning.  When the Chinese National Party Congress dominates the news, you can tell things are slow.  Equity futures are steady after a drubbing yesterday.  Here is what we are watching this morning:

After the Chinese trade deal: Although negotiations continue, the U.S. is moving on to other areas.  Trade talks between the U.S. and EU will begin on March 6.  It appears the EU is planning to negotiate a series of discrete deals, perhaps with the idea that a series of “wins” might distract Washington from attempting broader negotiations.  The EU desperately wants to avoid opening up its agricultural market and facing tariffs on autos.  Thus, it appears the plan is to agree to a series of small, narrow pacts to avoid the ones that would be most problematic and then hope that a new regime comes to Washington.[1]

We also note that the U.S. is ending preferential trade treatment for Turkey and India.[2]  In a sense, this change, which gives better trade arrangements for developing nations, reflects India’s size.  In other words, India is now a big enough economy that the U.S. wants it to give up its trade barriers.  Meanwhile, the decision to drop Turkey from the program reflects continued tensions between the two nations.  Turkey and the U.S. had a dispute over a detained American pastor, disagreed over the Kurds and Syria and apparently came to different conclusions over the fate of Jamal Khashoggi.  The official reason given for removing Turkey from the program was, like India, based on the size of its economy.  Overall, these moves highlight a change in U.S. trade policy.  American trade policy during the Cold War was to tie allies to the U.S. economy through trade and the dollar.  President Trump is adjusting this policy stance away from geopolitical goals to economic ones.

Finally, on trade, there is a new realization of the fallout from bilateral agreements.  In another major change in U.S. trade policy, the Trump administration has moved from multilateral agreements to bilateral ones.  This move greatly favors the U.S.; America’s size and the dominance of the dollar mean every one-on-one negotiation is biased toward the U.S.  By design, the Cold War trade policy of multilateralism did not allow the U.S. to fully exercise its dominance which encouraged other nations to join such arrangements.  For other nations, it allowed them to trade on a favored basis with the U.S. and avoid being dominated.  However, in bilateral arrangements, what is won in one agreement may disadvantage a third nation.  For example, it appears that China will commit to large purchases of U.S. LNG.  This could crowd out Canadian and Australian producers.[3]   If this does become the trend, look for nations to rush to Washington to make deals because being the last nation to negotiate an agreement will put that nation at great disadvantage.

China meetings: As widely expected, China has lowered its growth forecast to 6.0% from 6.5%.[4]  Although the media tends to get all verklempt over China’s GDP, it should be noted that given the way China’s economy is structured it can generate any GDP it wants—it simply has to decide how much debt it wants to add to its growing pile.  So, the decline in the growth trajectory is a good sign; it shows that China is trying to slow the growth of its debt.  At the same time, we think the level of GDP that would not require higher debt is probably around 3%.  It does appear China is going to stimulate its economy but on a lower scale than seen in the past.

In another budget decision, China increased its military spending by 7.5%, making it the world’s second largest spender.[5]

We also note that the Xi regime remains cautious on market reforms.  A joint project of Beijing and the World Bank has been quashed.  It appears the Xi government was uncomfortable with the paper’s recommendation of State-Owned Enterprise (SOE) reform.[6]  It is also worth noting that China’s influence on the World Bank has increased as it pays more to the bank’s operations.

Venezuela: Opposition leader Juan Guaido returned to Venezuelan yesterday without incident.  European diplomats met him when he arrived, which may have calmed the situation.[7]  Although Guaido remains very popular, the military in Venezuela continues to support Maduro so, until that changes, the standoff will continue.  What is uncertain is which actor benefits from time.  Maduro may be waiting out Guaido on the assumption that the divided opposition will fold the longer Maduro continues to control the government.  Guaido may be betting that U.S. sanctions will begin to deprive Maduro of the funding necessary to maintain the military’s support, and the longer the money isn’t available the more vulnerable Maduro becomes.  If they both take these positions, the stalemate will continue.

Greece returns: Greece is issuing its first 10-year sovereign bond in a decade.  The spread appears to be around 340 bps over a similar German instrument.[8] 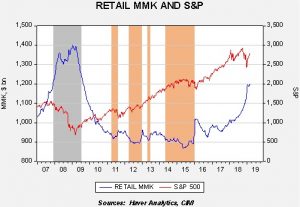 It is remarkable that we have seen such a strong bounce with little evidence of retail investor participation.  This leads us to one of two conclusions.  First, if retail stays away, the rally will likely stall around this level and we will remain rangebound with 2800 on the S&P as “resistance,” or the upper bound of the range.  Second, if retail returns, a strong rally is possible that will likely take us above 3000 on the index.  Unfortunately, determining which outcome is more likely is nearly impossible.  It all comes down to those eternal drivers, fear and greed.  If the former wins out, we would not expect too much more upside this year.  If the latter wins, we have a good way to move higher.  Stay tuned…