[Posted: 9:30 AM EST] Happy Monday!  Here is what we are watching this morning:

Trade wars: As details emerge on how the president decided to recommend across-the-board tariffs on steel and aluminum, it has become clear it was more of a reaction than a well-thought-out plan.  There is no actual executive order for this action so the “globalists” within the administration are working furiously to soften the tariffs.  The president tweeted this morning that he would consider dropping the tariffs if a new NAFTA deal is negotiated.  It’s hard to tell whether this latest tweet suggests he is looking for a face-saving way to walk back the recent tariff recommendations, or if he’s establishing an impossible bar to remove the tariffs.  Although the NAFTA negotiators are working to adjust the current treaty, it should be remembered that the original NAFTA negotiations took about two years to complete.  So, if the president really means he will require a completely new treaty, the steel and aluminum tariffs, if implemented, will be with us for a while.

Below are a few charts to highlight some points.

Primary metal industrial production in the U.S. has been stable for some time.  There is nothing in this data that would suggest collapse. 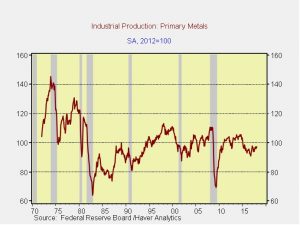 For contrast, this next chart shows what collapse looks like. 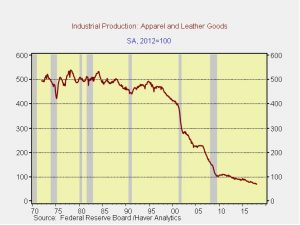 What we are seeing is excess capacity in primary metals.  Current capacity utilization is only 70% and has been weakening in each business cycle over the past three decades.  This suggests the industry has been too slow to reduce capacity.  Excess primary metals capacity isn’t just a U.S. problem—it’s a global problem with nations trying to hold onto jobs by subsidizing production to maintain employment.  Everyone in the industry realizes there needs to be a reduction in capacity and is waiting for someone else to take the action so they can stay in business.  This issue would argue that if the White House is actually worried about the national security effects of cutting steel capacity, the correct policy would be to subsidize the industry. 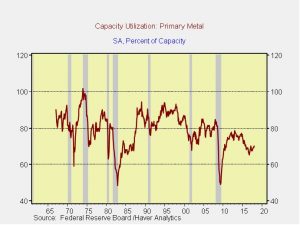 Of course, the broader concern is that the president’s actions will trigger a trade war.  This is a legitimate concern.  Using trade to foster foreign and domestic policy goals is perfectly legitimate.  In fact, the U.S. unilaterally opened its economy to trade after WWII, supplying the reserve currency, to create allies that would allow us to contain communism.  It clearly worked to win the Cold War.  Unfortunately, the policy remained in place but the U.S. doesn’t have a working idea of what it wants from foreign policy.  Those who have been adversely affected by trade have increased their influence in Washington and their goal is obvious—lots of high-paying, low-skilled jobs.  However, as long as capitalists control the political system, that outcome isn’t likely (trade isn’t the only way to hold down wages).  However, much damage can be done to the global economy by protectionism that is unguided by foreign and domestic policy.  In the immediate term, our worry is that rising protectionism unanchors inflation expectations.  That scenario would lead to much tighter monetary policy and higher interest rates.  It’s still too early to adjust our positions but protectionism is a threat.

Populists win in Italy: Early results indicate the Five Star movement took 32% of the vote, while the right-wing coalition of the Northern League and Berlusconi’s Forza Italia combined with 37%.  However, the former, which was considered the junior partner in the group, actually outpolled Forza Italia, winning 18% compared to 14% for Berlusconi’s party (minor parties in the coalition took the remainder).  The center-left collapsed, falling to 19%, a trend that has become common all across Europe.  There is no clear path to government.  No single party or coalition has a majority.  In the past, Five Star has eschewed joining any other party.  In theory, the Northern League could join Five Star to form a government.  Although such a government would be unstable, together it would send an unmistakable signal to the EU—austerity is over.  The EU hopes for protracted coalition negotiations that end up with a mainstream minority government or new elections.  If the populists get power, the EU and the stability of the Eurozone will come under threat.

The spread between Italian and German sovereigns widened on the results.

Merkel wins: The SDP rank-and-file chose a slow demise over a quick exit and voted to join another grand coalition with the CDU/CSU.  Given the steady erosion of support for center-left parties (see above), there was a push within the SDP to reject the coalition and move left.  However, this would had led to new elections and, given recent performance, the SDP could have spiraled into irrelevance.  Instead, 66% of the SDP members decided that Merkel had given them a good deal of influence despite lousy polling numbers.  We suspect this will be Merkel’s last government.