As March draws to a close today, we’re reminded of the old adage about the month: in like a lion, out like a lamb.  After what we’ve all gone through during the last month, we certainly hope for a day that’s as quiet and gentle as a lamb!  As always, we review all the key news on the coronavirus epidemic and related, market-relevant items. 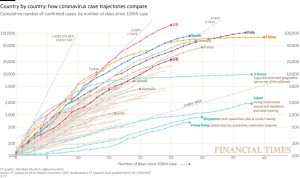 Global Oil Market:  Two major shale producers in the Permian Basin have asked Texas regulators to consider curtailing crude output in the state as the industry grapples with collapsing demand and plunging prices.  Meanwhile, poorer oil producers such as Iraq and Venezuela are being forced to consider steep budget cuts as low oil prices cut deeply into their revenues.