[Posted: 9:30 AM EDT] Global equity markets had a weak tone overnight but much of that is probably related to quarter-end adjusting.  We did see good Chinese data (see below) and sentiment surveys remain robust.  For example, the National Association of Manufacturers’ outlook survey hit a new all-time high for the 20-year history of the index.  We suspect some of this reflects hopes of trade relief from the Trump administration.  The key is whether or not this boost in sentiment, seen in both business and consumer surveys, will translate into real growth.  History suggests that we should see a boost to the economy over the next two to three quarters.  However, there isn’t much evidence in the actual output data of a robust expansion.

On the trade issue, the administration is starting the push to address the trade deficit.  Commerce Secretary Ross and the U.S. trade representative (Robert Lighthizer, who hasn’t been confirmed yet) are expected to conduct a comprehensive study on how foreign nations are taking advantage of the U.S.  They are expected to report back to the president in 90 days on their findings.  At the same time, Peter Navarro, the head of the newly created National Trade Council, is arguing that there is too much “dumping” occurring that the U.S. isn’t penalizing.  Dumping occurs when a nation sells goods and services into the U.S. below the cost of production.

Given the struggles this administration has faced in terms of execution, it remains to be seen if much will come of all this.  However, unlike health care and tax reform, there is much the president can do on trade without Congress.  And, there are few champions of free trade left in Congress.  Thus, we would expect little pushback from the legislature on protectionist measures.  The reserve currency issue seems to have eluded this administration.  Simply put, the reserve currency nation needs to run a trade deficit or it reduces the global money supply and cuts growth.  The global ramifications of trade impediments will be negative for growth.

It should be remembered that the quickest way to reduce imports is to weaken consumption. 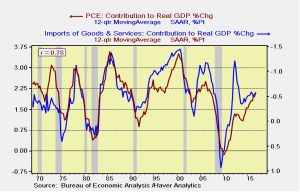 This chart shows the three-year average contribution to GDP from consumption and imports (imports shown on an inverted scale).  The two series are tightly correlated.  In general, the causality runs consumption to imports, which means that reducing imports doesn’t necessarily bring down consumption but consumption changes imports.  Thus, the attempt to simultaneously boost growth and lower imports probably fails.

Of course, the other way to reduce the trade deficit would be to lift exports.  Exports are always dependent on foreign growth but are also sensitive to the dollar.  The Trump administration will likely figure out at some point that a weaker currency is key to narrowing the trade deficit. 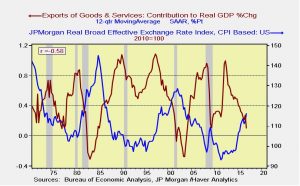 Once this realization sets in, we would expect the FOMC to become the target of scorn as it raises rates.  If the administration wants a narrower trade deficit, it needs a weaker dollar, which would be helped by easier monetary policy.  The Fed raising the policy rate doesn’t support that goal.

We note the president warned, via tweet, that meetings next week with General Secretary Xi will be contentious.  The steps the administration is taking with trade probably reflect this warning.

In South Africa, President Zuma has fired his well-respected finance minister, Pravin Gordhan, in a bid to solidify control.  As we have noted, this move hasn’t been taken well by the financial markets.  Gordhan was seen as a steady leader, one who modified the free-spending habits of Zuma.  With Gordhan out of the way, markets fear an inflationary fiscal and regulatory expansion.