[Posted: 9:30 AM EST] We are seeing a modest decline in U.S. equities and a softer dollar as traders square positions in front of two key speeches today, one from Vice Chair Fischer and the other from Chair Yellen.  It is highly likely these leaders at the Fed will signal a rate hike is coming at the March 15th meeting.  Fed funds futures put the odds of a hike at 90%; for much of this century, the Fed has not risen rates without preparing the financial markets for the move.  Expectations for a rate hike create a “freebie” for the central bank that it will almost certainly use to its advantage.

The real question is the terminal rate.  Simply put, where does the Fed achieve at least a neutral policy rate that is neither accommodative nor restrictive?  We regularly publish the Mankiw Rule variations to examine this idea, although we view these models as more of what the Fed thinks it should do, not what the Fed should do.  In other words, the Mankiw Rule (and its forefather, the Taylor Rule) works off a Phillips Curve model that suggests there is a relationship between inflation and labor markets.  Our research suggests there isn’t much of a link and thus the Fed is probably using an improper model.  A better structure, in our opinion, would be for the FOMC to merely focus on an inflation target and assume the labor markets take care of themselves.  But, we don’t expect anyone from Washington to make it to our offices in leafy Webster Groves, MO anytime soon.

So, here are a couple of our concerns. 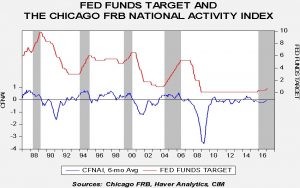 This chart shows the past four tightening cycles along with the Chicago FRB National Activity Index.  This is the first time in nearly three decades that the Fed has started to raise rates when this index is below zero, suggesting an economy growing below trend.  This analysis would suggest the Fed believes it is so far behind the curve that it should raise rates even though economic growth remains sluggish. 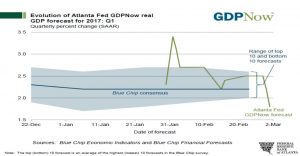 The forecast has dropped to +1.8% after running above +2.5% into mid-February. 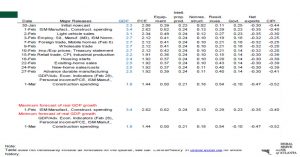 The latest data, which included personal income and consumption, advance trade data and construction spending, have reduced the consumption forecast and widened the trade deficit.  In addition, the drag from inventory liquidation rose as well.  The forecast suggests that the economy continues to grow at a sluggish pace and there isn’t much there to suggest the Fed should be moving aggressively to raise rates.

So, what do we expect from the vice chair and chair today?  No big surprises; they will likely confirm the market’s bias for a March hike and signal that they will continue to move rates higher based on the data flow.  If both are upbeat about the economy, we may see the dollar lift.

The shadow of Russian influence on the Trump administration continues to be a distraction.  Both parties have become masters of creating controversies that drain the party in power’s political capital by forcing them to deal with the distractions instead of policy goals.  What is interesting to us is how the persistent “smoke” (as described by Mike Allen at Axios today) on Russia is affecting that nation’s equities as well.

This chart shows the MICEX index for Russian equities in USD terms.  From the Election Day lows on November 9th until early January, the index rose 25.0%; since then, it is down 8.9%.  Note how the index has broken the trading range and appears poised for further weakness.  The potential for a Russian scandal for this administration will, at a minimum, thwart any attempts at normalization with Russia and is being taken as bearish by Russian equity markets.