[Posted: 9:30 AM EDT] Risk assets are trending higher this morning in a quiet trade.  Several markets are closed today for Holy Thursday and U.S. markets will be closed tomorrow for Good Friday.  A number of European markets will close for Easter Monday.  When a group of markets are closed in this fashion, trading usually slows and liquidity thins, which can lead to violent market reactions.  Here is what we are watching today:

More beat down on tech: Yesterday, we noted that Amazon (AMZN, 1431.42) took a drop on reports that the president didn’t like the company’s behavior.  Facebook (FB, 153.03) has also been under pressure.  However, there is another, more interesting, trend developing.  Traditional media has seen the tech giants destroy its business model by (a) ending the classified advertising market for newspapers, and (b) skimming their content for free and reducing subscription revenue.  Media companies, such as newspapers and magazines, have been under pressure since the middle of the last decade due to the onset of social media.  However, the current turmoil in tech, especially with social media and data gatherers, reminds us of a famous quote, sometimes attributed to Mark Twain:[1]

Never pick a fight with people who buy ink by the barrel.

The media companies may be fanning the flames of this discontent with social media and tech, in general, and, ironically, these same firms provide the content “skimmed” by social media.[2]  Simply put, this may be traditional media’s chance to undermine technology and retake control of the media landscape.  What this means for the market is that the problems for technology are not likely to go away soon because the media has an incentive to keep the topic front and center in the minds of the public and lawmakers.

The new German foreign minister: Meiko Maas, a member of the Social Democrats (SDP), has been given the mandate of foreign minister in the new Merkel government.  Maas’s appointment was something of a surprise; although he has a long career in German politics, he has virtually no foreign policy experience.  So far, Maas has surprised Germans by hewing to a hard line on Russia.  The SDP has a reputation of being “chummy” with Russia.  Former Chancellor Gerhard Schröder called Putin a “flawless democrat” in 2004 and, shortly after leaving office, joined the board of directors of the Nord Stream natural gas pipeline, a Russian/European venture.  Sigmar Gabriel, the recently ousted leader of the SDP, repeatedly supported an end to Russian sanctions.  As Russia becomes increasingly belligerent toward the West, having a hardliner in the German foreign ministry is an unexpected development and will help in creating a united Western front against Putin.

As the seasonal chart below shows, inventories are usually rising this time of year.  This week’s rise was below normal and is supportive.  Every week that fails to show a build on the seasonal pattern is a week in which the seasonal factors become less bearish.  Although there is still time for stockpiles to rise, it is unlikely they will reach their seasonal norms. 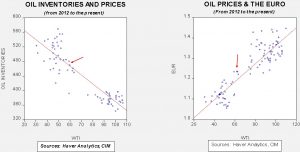 Based on inventories alone, oil prices are undervalued with the fair value price of $64.24.  Meanwhile, the EUR/WTI model generates a fair value of $75.02.  Together (which is a more sound methodology), fair value is $71.51, meaning that current prices are below fair value.  Oil prices remain range bound but should move higher by early summer when the driving season begins.

[1] Although, like all famous quotes, the attribution is in dispute.