[Posted: 9:30 AM EDT] The big news today is no surprise but is still important—PM May formally declared Article 50, beginning the process of the U.K.’s exit from the EU.  The law gives both parties two years to work out the exit details.  Article 50 has never been used before so the U.K. and the EU are creating the framework for any future nations to leave the EU.  The law does allow for extensions, so we may not be finished in two years and a trade deal will probably take much longer to execute.  We note that there has been a good bit of speculation on what will occur; most analysts expect this to be a negative event for the U.K., although Brexit supporters suggest the opposite.  Because this action is unprecedented, we believe there will be lots of surprises that develop.  Here are a few ideas we have been thinking about:

The U.K. government is about to expand.  The EU provides regulations for a myriad of industries across Europe.  Although members grumble about being restrained by “Brussels,” the fact is that the individual nations reduce governance costs by consolidating regulation.  The U.K. will now have to take over this governance.  While this will give the U.K. government more control over its economy and society, it will need to build the bureaucracy to actually regulate these activities.  Sadly, we expect the EU to require similar regulations for tradeable goods and services, so the new U.K. regulations will likely look much like the ones it had before Brexit.  This expansion of government will be expensive and likely lead to higher deficits.

Devolution may follow.  Scotland has already started the process for an independence referendum.  Northern Ireland is making similar noise.  If former nations that were once independent decide they would like to return to the EU, or simply want independence, nations within Europe could split.  Given that most nations in Europe have regions that would like more autonomy, other nations may face pressure to either follow the U.K. out of the EU in a bid for more independence or these regions will need to be placated in order to avoid this threat.

A broader rethink of the EU may be developing.  Next week’s WGR will look at the EU at 60; on March 25, the EU officially celebrated its 60th birthday.  Interestingly enough, there is growing sentiment that the current structure isn’t working and a looser confederation might be more effective.  Brexit may turn out to be the turning point that the EU needed to adjust and historians may decide that it was this event that led to a new arrangement for the EU.  The tensions within the EU have always been about sovereignty.  Simply put, Brexit is a signal that sovereignty is important to nation states and the pseudo-consolidation offered by the EU is no substitute for the nation state.

The role of financial markets is to discount the future—Brexit will be hard to discount and thus market volatility for European assets will probably rise.  The current consensus is that Brexit will be negative for the U.K. economy.  The weakness in the GBP is part of that expectation.

This chart shows the purchasing power parity for the GBP/USD; this model uses relative inflation to establish the valuation of the exchange rate.  The current exchange rate, around $1.25, is well below the calculated parity of $1.6439.  In fact, this is the second weakest level for the GBP since currencies floated in the early 1970s.  The weakness is mostly due to Brexit and fears that it will lead to a much weaker economy.  If the U.K. economy manages to avoid a downturn, the currency is quite cheap and could rebound.

One of the more interesting market actions this morning has been the drop in the EUR.

Note that the EUR/USD rate dropped sharply around the time the letter from May to Donald Tusk, the current EU president, was acknowledged.  It has recovered a bit but the market really doesn’t expect Brexit to be bearish for the EUR.  In fact, it might be because other nations may leave and the actual membership of the Eurozone could be more fluid than the market expects.  Again, this drop may only be temporary, but the fact that the currency sold off was unexpected.

In other news, the GOP is starting to consider its options on tax reform.  It will be daunting to execute.  Rules require that any use of budget reconciliation, which would allow tax reform to pass through the Senate without 60 votes, needs to be part of a broader budget bill.  Since the White House budget was mostly panned it would mean that a new budget would have to be built.  Congressional GOP budget plans assumed the repeal of ACA which didn’t happen (perhaps that is why we are hearing members talk about taking another swing at repeal).  Another problem is that any tax change created by this process requires a 10-year sunset, which will dampen the effectiveness.

The other way to go about this process is to try to make it bipartisan by appealing to Democrats.  Getting to 60 votes in the Senate requires eight Democrats to join with all Republicans.  The good part about that course of action is that the tax changes would be permanent unless changed by Congress in the future; the sunset would not occur.  The bad news is that this is not a bipartisan environment.  We did note yesterday that the president is considering linking tax reform and infrastructure spending together, perhaps to encourage Democrats to go along with tax reform in order to get the infrastructure spending they want.  However, if the president insists on not signing one without the other, he risks getting neither.

Tax reform is probably easier than health care reform.  However, that doesn’t mean it’s easy.  Consequently, the idea that this can be done quickly is probably incorrect.

Yesterday, the Conference Board reported that March consumer confidence jumped to a 16-year high.  The rise is significant as it should also be supportive for equities. 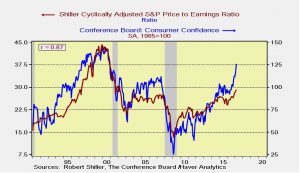 Finally, Vice Chair Fischer suggested two more rate hikes this year.  We suspect this is the baseline for the FOMC, putting the upper limit of fed funds at 1.50% by December.