[Posted: 9:30 AM EDT] European markets opened strongly higher after the long Easter holiday, but have given back some of the gains in early morning trading.  Asian equities were mixed, with Chinese markets trading lower.

All eyes will be turned to Fed Chairman Yellen’s address to the Economic Club of NY today.  Given the relatively sanguine tone from recent Fed speakers compared to the dovish tone of the most recent FOMC press conference, investors will be watching for indications of divergences within the FOMC.

Jon Hilsenrath, the “Fed whisperer” at the WSJ, recently penned an article suggesting that dissent has declined at the Fed.  He suggested that Dallas FRB President Kaplan, Philadelphia FRB President Harker and Minneapolis FRB President Kashkari are more moderate than their predecessors and we would concur with that assessment.  Kaplan and Harker replaced two very hawkish presidents, Fisher and Plosser, while Kashkari replaced Kocherlakota, who was very dovish.  On our 1-5 scale, which runs most hawkish to most dovish, the previous committee averaged 3.06 with a standard deviation of 1.5.  The current full committee averages 3.18 with a standard deviation of 1.2.  The good news is that the odds of dissent are lower, which means that Chairman Yellen will likely get her way.  At the same time, there is a lack of diversity of views, meaning that there are fewer members who would be likely to oppose the chairman if the FOMC goes in a bad direction.  If the two governor positions are filled this year, the board will likely become even more centrist.

In the wake of relatively soft Q4 GDP, the outlook for Q1 GDP is rapidly deteriorating. 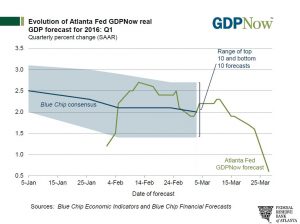 This chart shows the latest data from the Atlanta’s FRB GDPNow model, which projects the current quarter’s GDP based on the flow of economic data.  With the downward revision to January personal consumption expenditures and the weak trade data, the current forecast is now 0.6%.  Although the employment data on Friday might give these numbers a boost, this data should scotch talk of Fed tightening in April. 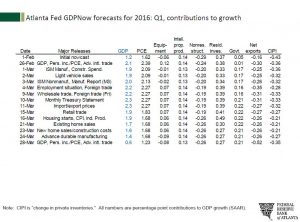 This data shows the contributions to GDP based on the Atlanta FRB’s model.  Note that yesterday’s report cut growth by 80 bps and, since March 11, the GDP forecast has been cut by 170 bps.  All categories are down, which is a disturbing sign.