[Posted: 9:30 AM EDT] Equities were weak around the world but we are seeing a mixed recovery in the early U.S. trade.  Technology remains under pressure.  Here is what we are watching today:

Oops: Yesterday, we bravely opined that Kim Jong-un probably didn’t go to China.  Well, today we get to issue a correction.  He did go to China, although the visit was officially “unofficial.”  In other words, it wasn’t a scheduled state visit.  We don’t know for sure why Kim chose China and Chairman Xi for his first visit with foreign leaders.  However, there are a number of possibilities.  First, China may have feared being isolated.  As North Korea prepares for summit meetings with South Korea, the U.S. and maybe Japan, China may have suddenly become quite open to meeting with the North Korean leader.  Simply put, the diplomatic situation is changing and China has been mostly on the sidelines.  China may have wanted to improve relations before the summits, fearing it was out of the loop.  Second, Kim may have wanted to remind his summit “guests” that he still has ties to China and use that knowledge for leverage.  Kim comes from a long family line of leaders who are deft at playing powers off each other.  Third, we expect China to try to host the U.S./North Korean summit to increase leverage over both nations.  From what we said yesterday, we still believe North Korea eyes China warily.  Kim Jong-un executed his uncle along with most of his family and also assassinated his brother in a spectacular attack in a Malaysian airport.  His uncle was well liked in China and had close ties with Beijing.  And, his brother, Kim Jong-nam, was being protected by China.  The North Korean leader has reasons to believe China would prefer a more accommodating leader in Pyongyang and thus fears Chairman Xi.  The fact that this meeting has taken place suggests that either (a) Kim Jong-un feels more confident now, or (b) Chairman Xi has signaled to Kim that he doesn’t have designs on his removal from power.  That probably doesn’t mean China can put itself between the U.S. and North Korea, but it has an incentive to try and Kim has an incentive to see what that insertion is worth to Beijing.

Market action: The equity markets have been struggling since their late January peak.  Although a number of factors are involved, the biggest is the sentiment turn against technology.   In our recent review of Scott Galloway’s book (see Reading List link above), The Four, we note how the major tech firms have become darlings of consumers, with two of them providing what appeared to be “free services” which are, instead, data accumulating operations that are sold to advertisers or, as we have discovered, political campaigns.  Galloway has made it clear that about the only force that can restrict these firms is government.  Until recently, government regulation looked like a long shot but that is no longer the case.  Mark Zuckerberg of Facebook (FB 152.22) is preparing to testify before Congress.  According to Axios,[1] the president has Amazon (AMZN, 1497.05) in his sights.  Technology isn’t the whole market but it has become the largest sector in the S&P, currently at 24.8%.  The impact of technology and the effect of concentration (always an issue in a capitalization-weighted index) is best observed in the relationship between the cap-weighted and equal-weighted S&P indexes.

Although we will have more to say on this topic in the upcoming Asset Allocation Weekly Comment (which will be published on Thursday due to the market’s close for Good Friday), we suspect we are in a corrective phase.  Earnings should remain robust due to the tax changes and strong economy, and there is no recession in sight, which usually triggers major bear markets.  Although a 1987 event is possible, the fact that we call it a “1987 event” shows how long it’s been since a major bear market has occurred without a coincident recession.

How long will this go on?  The following Bloomberg chart offers some insight. 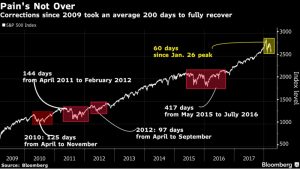 The shortest corrective, or, perhaps better said, “digestive,” phase in this bull market was 97 days, which means we have about another month.  As we will show in the upcoming AAW Comment, all three of these sideways corrections occurred with low levels of liquidity; this one is occurring with over $1.0 trillion in retail money markets.  Thus, we suspect it will be shorter.   But, we will likely see continued churn in the market for at least another few weeks.