For the first time in ages, it actually feels right to say, “Happy Wednesday,” given the historic surge in U.S. stocks yesterday (the Dow’s rise of more than 11% was its best daily gain since 1933).  Just as important, Republicans and Democrats in the Senate early this morning reached a deal on a $2 trillion economic support package aimed at mollifying the effects of the COVID-19 pandemic (see below).  As always, we review all major news related to the pandemic below.

COVID-19:  Official data show confirmed cases have risen to 436,159 worldwide, with 19,648 deaths and 111,847 recoveries.  In the United States, confirmed cases rose to 55,238, with 802 deaths and 354 recoveries (though the recovery data is lagging badly).  Here is the latest chart of infections from the Financial Times: 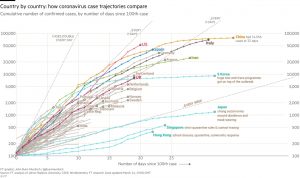 The rate of infections continues to grow exponentially as does the economic disruption from containment measures.  Spain has now become a key center of infections, with hundreds dying daily.  In the U.K., Prince Charles has tested positive for the virus; officials refused to say whether Queen Elizabeth has been tested since she last visited with the prince on March 12.  There are increasing signs that Russia is systematically underreporting its cases.  Fortunately, however, there are welcome signs of fiscal and monetary support being put into place.

Odds and ends:  Some Russian oil firms are reportedly pushing back against President Putin‘s effort to boost production in his market share war with Saudi Arabia.