[Posted: 9:30 AM EDT] Equities have lifted from their overnight lows on a better than expected German IFO business sentiment index report.  Although the Mueller news didn’t have any impact on financial markets, a finding of collusion would have been majorly negative, so that problem has been avoided.  Here is what we are watching this morning:

A signal for the Fed: We use the implied rate from the three-month Eurodollar futures, two years deferred.  Essentially, it is the market’s projection for LIBOR two years from now.  It has had an uncanny ability to signal what monetary policy “should” do.  Over the past week, a clear signal has emerged—the Fed needs to cut rates now. 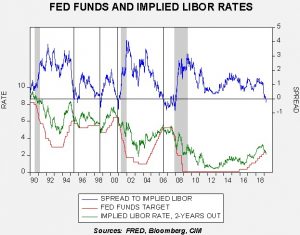 The green line shows the implied LIBOR rate, the red line is the policy rate and the blue line shows the spread.  We have placed vertical lines at points of earlier inversions.  The genius of the Greenspan Fed was that he tended to cut rates quickly when the blue line fell below zero.  Although there is no record of the FOMC using the above chart signals for policy, it is essentially a yield curve analysis, which policymakers closely monitor.  The Bernanke Fed stopped raising rates at the point of inversion but was slow to cut, which probably led to the 2007-09 recession.  The Powell Fed is now facing a similar situation.

Given the state of flux in the underlying theories of policy, it might be possible for Powell to push the committee to cut rates.  But, given how rapidly the Fed has moved from tightening in December to steadying by March, taking the next leg to cut might be too difficult for Powell to manage.  Although this inversion doesn’t mean recession is imminent, it does suggest that the odds of a recession are significantly higher than they were just a few months ago.

Brexit: We are expecting a series of votes this week that probably won’t clear up anything.  The problem is that there is no consensus in Parliament on a way forward.  The situation in the legislature likely reflects conditions among the electorate.  Over the weekend, there were large marches in London for a second referendum.[1]  Meanwhile, Brexit fatigue has led to sentiment for a hard Brexit just to end the eternal drama.[2]  PM May faced pressure to resign over the weekend, which she managed to fend off, but the chances of her ouster remain elevated.[3]  The GBP is holding its own with the current delay in place, but there is still the potential for the U.K. to stumble into a sudden break with the EU, which, at least in the short run, would probably be devastating for the U.K. economy.

Chinese trade talks: Although negotiations continue, China is not bending on technology.[4]  We do believe both President Trump and General Secretary Xi need a deal, but they may be misjudging who needs it more.  If the talks break down, equities will not take it well.

Stephen Moore for Fed Governor: President Trump tweeted that he will nominate Stephen Moore for one of the open governor positions on the FOMC.  There has been rather strong pushback from both the establishment right and left.[5]  We view this announcement as further evidence that the president is becoming more comfortable with his office.  He followed the advice of Treasury Secretary Mnuchin on Powell, Clarida and Liang.  Trump has found all of them wanting because he doesn’t want a technocrat at the Fed; he wants a loyalist.  Moore has pressed for Powell to cut rates; during the Obama administration, he argued the Fed should have raised rates to avoid hyperinflation.  Although mainstream economists will oppose Moore’s appointment, we don’t expect the Senate to turn it down.

We are in the very early stages of moving the Fed from an independent technocratic body to a more politicized one.  This shift is probably inevitable due to the desire to reflate the economy.  An independent Fed will tend to be more concerned about containing inflation, which is not what the populist uprising wants.  Although reflation will take some time, the signs are all in place—trade wars, immigration opposition and now changes at the FOMC.

Italy joins the Belt and Road project: Italy welcomed President Xi and signed a MOU to join the Belt and Road project.[6]  Although the actual impact probably isn’t going to be a big deal, the symbolism is huge.  This is the first G-7 nation to join the project.  Italy’s economy has struggled within the Eurozone and it would like to get support from the outside.  China is undermining the U.S.-led order, in part, because the U.S. is less interested in the “care and feeding” of that order.  It still isn’t obvious that China has the economic heft to generate a new world order, but it can clearly weaken the current one.