As Tuesday dawns and financial markets surge, it’s important to remember that true market stabilization amidst the pandemic would probably require three things: 1) full support for the economy and financial markets by the Federal Reserve and other major central banks; 2) a credible fiscal support package from the U.S. Congress to cushion the economic impact; and 3) a slowdown in the rate of infections that would take pressure off national health systems.  Investors today are encouraged by yesterday’s progress on the first factor after digesting it overnight, but there is still work to do on the second and the third, as discussed below.

COVID-19:  Official data show confirmed cases have risen to 392,331 worldwide, with 17,156 deaths and 102,972 recoveries.  In the United States, confirmed cases rose to 46,450, with 593 deaths and 17 recoveries.  According to a new IPSOS poll, just 1% of Americans say they’ve been able to get tested for the virus, but 5% say they know someone who tested positive.  Here is the latest chart of fatalities from the Financial Times: 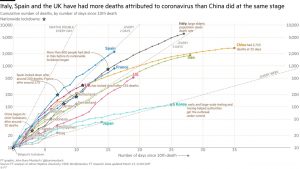 The key takeaway from the chart is that the rate of infections continues to grow exponentially, with hospitalizations and deaths rising in tandem.  Spain had more than 500 deaths from the virus in the last day.  In Belgium, new hospitalizations moderated a bit, but the number of victims going into intensive care surged.

Odds and ends:  After failing to convince Afghanistan’s rival presidents to form a national unity government, Secretary of State Pompeo said the U.S. will slash $1 billion from its aid budget for the country.  Secretary of Defense Esper says the U.S. military has conducted a raid in Honduras to rescue a U.S. citizen facing an undisclosed danger.