[Posted: 9:30 AM EDT] As noted below, St. Louis FRB President Bullard has joined a chorus of other regional presidents pushing back against the dovish tone from the last Fed meeting.  The change in Fed behavior is discussed in this week’s Asset Allocation Comment, published below on page 7.  As these comments ripple through the market, we are seeing the recent rally fade in commodities, foreign currencies and equities.

What is becoming evident is that the paths of several markets are increasingly dependent on U.S. monetary policy.  The tone out of the March meeting was clearly bullish.  However, subsequent speeches have also made it known that this dovish position isn’t universally shared.  We do believe that Yellen is probably fending off the Phillips Curve adherents on the committee by using inflation expectations and dollar strength to argue against further tightening.  The dots plot suggesting two rate hikes this year is probably about right, but the financial and commodity markets are taking the position that monetary policy will be consistently accommodative.  For that to happen, Chairman Yellen is going to need to keep control of the committee against rising opposition to policy accommodation.  If she loses the battle, equities and commodities are at risk, whereas the dollar and Treasuries should benefit.  In general, it is usually safe to side with the chairman; however, it should also be noted that she probably can’t hold her position with three dissents on any policy decision.

At present, it would not be a stretch to see Bullard, George, Williams and Mester press for a rate hike in April.  If they hold off, that concession probably only comes with a promise to raise rates in June.  Only George has shown she will consistently dissent.  Growing opposition to dovish policy could make Yellen’s job much tougher in the coming months and create choppier markets. 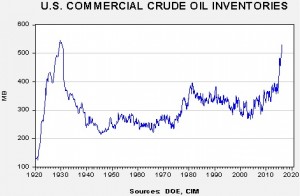 Current stockpiles are 532.5 mb, only about 12 mb below the all-time high set in October 1929.  Based on seasonal patterns, we would expect that oil record to be broken before the end of next month. 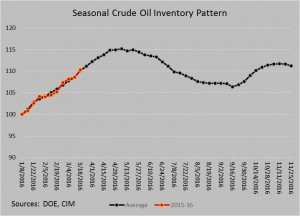 This chart indexes current storage levels compared to the past five-year average.  By the middle of next month, the injection season will come to a close.  If we assume that the EUR/USD exchange rate remains in the $1.11 neighborhood, a return to the low $30s on crude oil is possible.  However, by late summer, a return to the low $40s would be expected.  To some extent, we view the crude oil market as a bit ahead of itself, but the bearish seasonal situation is almost over.

The relationship between oil prices and equities remains very tight. 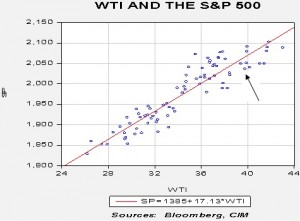 The current pair of oil prices and the S&P 500 are noted with an arrow.  The current level of the equity index is a bit below the linear regression line, suggesting the market is a bit cheap.  If this relationship holds, a trip to the low $30s in crude oil will likely result in an S&P between 1,900 and 1,950.