[Posted: 9:30 AM EDT] It was a dark and stormy night for risk assets.  However, we are seeing glimmers of light in U.S. equity futures as they have recovered their overnight losses and have turned positive.  Here’s what we are watching:

A budget deal: The budget deal passed Congress, meaning a shutdown was averted.  Along with it is a clear ending of austerity. 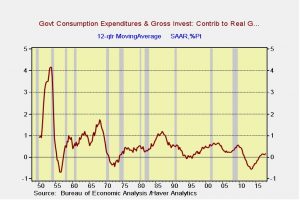 This chart shows the contribution of government spending to GDP, smoothed with a three-year moving average.  This chart always comes as a surprise; this only measures what the government spends on goods and services.  Much of government spending is transfer payments which are captured by the consumption or investment sectors of the economy.  As the chart shows, we have only seen two other periods when government spending detracted from growth and both occurred during periods of military demobilization.  It is remarkable to see government spending reduce growth during a period of overall weak economic activity.  Much of this weakness was due to falling state and local government revenues; these entities usually cannot deficit spend so, as revenue declined, so did their spending.  However, the federal government did not offset these declines due to the austerity policy of sequester.  That policy is clearly over.  Thus, government spending will now provide support for growth.  Of course, deficits will rise as well.  This will either lead to (a) a wider trade deficit, or (b) higher inflation.  [BREAKING: President Trump tweets he may veto the spending bill due to the lack of wall funding and the lack of resolution on DACA.  However, if there is a veto, the shutdown will likely be short and, if anything, more spending will be the result.]

John Bolton: H.R. McMaster was ousted from his position as National Security Advisor, effective April 9, and will be replaced by John Bolton.  Bolton has extensive government experience and is a well-known policy hawk.  This is the president’s third National Security Advisor.  Michael Flynn left early in the term due to scandal, while the president and McMaster never got along and reports suggest that Tillerson and Mattis were not fond of McMaster.  However, Bolton is an entirely different figure.  He is an experienced Washington hand who is well versed on how to use the apparatus of state to move policy.  He is on record calling for military action against both Iran and North Korea, and he supported the invasion of Iraq.  Although much of the media is framing this decision as the president selecting a National Security Advisor who is more aligned with his views, it should be noted that the president’s positions are fluid while Bolton’s are quite consistent.  Thus, if talks with North Korea bring a thaw, it’s hard to imagine Bolton will like this outcome and he may be vocal in his opposition.  Bolton and Trump do appear to be on the same page regarding Iran, which means the nuclear deal is clearly in danger and the Middle East could be heating up.  In response, we have seen oil and gold prices lift.

Trade:  China announced token retaliation against the administration’s announced sanctions.  Although trade policy is worrisome, we want to reiterate that, at least so far, the bark has been far worse than the bite.  We view what has transpired so far as warning shots across the bow rather than the onset of hostilities.  If everything the U.S. has announced is implemented, it will affect about 10% of China’s exports to the U.S. and 2% of its global exports.  That’s not to say what is happening isn’t important.  To some extent, targeting China probably signals the fact that the U.S. is no longer treating China as an emerging capitalist democracy but as a strategic competitor.  For the past three decades, the U.S. has allowed China to engage in openly mercantilist trade policies on the assumption that rising income would eventually force the CPC to democratize.  That assumption has mostly been proven false and now the U.S. has to fashion a new response to China.  This trade action by the administration will probably be seen by historians as the beginning of this process.

The recent action in steel equities offers a cautionary tale of how difficult it is to position investments in this trade policy environment.

This is a chart of the S&P steel sub-index.  Expectations of trade action lifted this group in February.  Since March 9, the index is down 12.1% as the administration exempted allies from the steel tariffs.  Clearly, it is hard to position for such policy uncertainty.