[Posted: 9:30 AM EDT] It’s a risk-off morning so far.  Equities are declining, Treasury yields are falling and the JPY is appreciating.  The factors hitting risk markets are softer than expected PMI data (see table below) and trade fears.  Here is what we are watching this morning:

China trade: Tomorrow, the administration plans to announce around $50 bn of tariffs and penalties on China, focusing on intellectual property confiscation.  We will be watching to see how the administration acts with China.  The pattern with other trade issues has been to announce dire changes then negotiate to a less aggressive position.  For example, we are seeing some moderation in the NAFTA negotiations.[1]  On the steel tariffs, we are seeing a steady parade of exemptions.  As we have noted before, the president likes flexibility in negotiations; he stakes a position then moderates from there.  Thus, the fear of trade action is reasonable but the actual policy pattern we are seeing, so far, has been less onerous than what’s been announced.  We would expect some threats of retaliation from China.  The most likely targets will be agricultural.

Other central banks: As forecast, the Bank of England didn’t change rates, but the vote was 7-2, with the dissenters calling for a rate hike.  The news led to an initial spike in the GBP and British debt but the former has given up its initial gains.  The PBOC responded to the Fed rate hike by raising its seven-day repo rate by 5 bps to 2.55%, but we suspect this was more for show; the move is small as the repo rate acts as a floor for interbank lending rates.  The actual interbank lending rate is nearly 3.15%, so the impact from the official rise is nil.  However, the optics of not following the Fed, especially with the Trump administration teeing up trade actions, would not have been favorable.

The Fed: As expected, the Fed raised rates by 25 bps.  Growth estimates were increased and the FOMC expects unemployment to fall below 4%.  In the statement, growth was described as “moderate” compared to “solid” in the last statement, likely reflecting the persistent pattern for soft Q1 GDP data.  The dots did move higher. 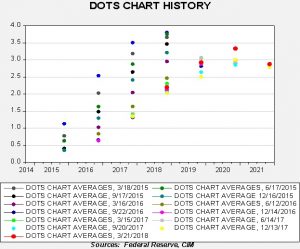 The red dot is yesterday’s meeting.  We don’t use the median but the average, and we note that the terminal policy rate has increased, with 2020 showing a 3.3% terminal rate.  We also note that the implied yield on the two-year deferred Eurodollar futures is near 3%, suggesting the market is building in further rate hikes in light of this report.  In general, it appears the market expects three hikes this year and three next year, but the risk of even tighter policy is possible.

How did Powell do?  We think rather well.  He answered quickly and directly and referenced the committee on economic questions.  He appeared more comfortable on questions of market liquidity or bank stability.  Financial markets were whipsawed a bit; we suspect there was concern that Powell would make a gaffe and thus there was a good bit of positioning.  But, interest rates eased and equities recovered as the press conference wound down.  What is notable is that the dollar weakened and gold continued to rally.  Although the currency trade is complicated by administration trade policy, the fact that the dollar weakened and gold rallied after the policy change suggests those markets viewed the action as dovish, or at least neutral, and shifted their focus to trade policy.

As the seasonal chart below shows, inventories are usually rising this time of year.  This week’s decline is clearly supportive.  Every week that fails to show a build is a week where the seasonal factors become less bearish.  Although there is still time for stockpiles to rise, it is unlikely they will reach their seasonal norms. 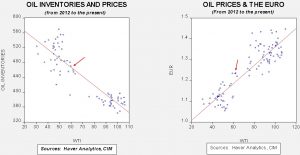 Based on inventories alone, oil prices are undervalued with the fair value price of $64.75.  Meanwhile, the EUR/WTI model generates a fair value of $74.84.  Together (which is a more sound methodology), fair value is $71.56, meaning that current prices are below fair value.  Oil prices rose this week as the DOE data was bullish.  As noted above, we are not seeing the usual seasonal build, which is supportive.  At the same time, rising tensions with Iran are also adding to geopolitical concerns.